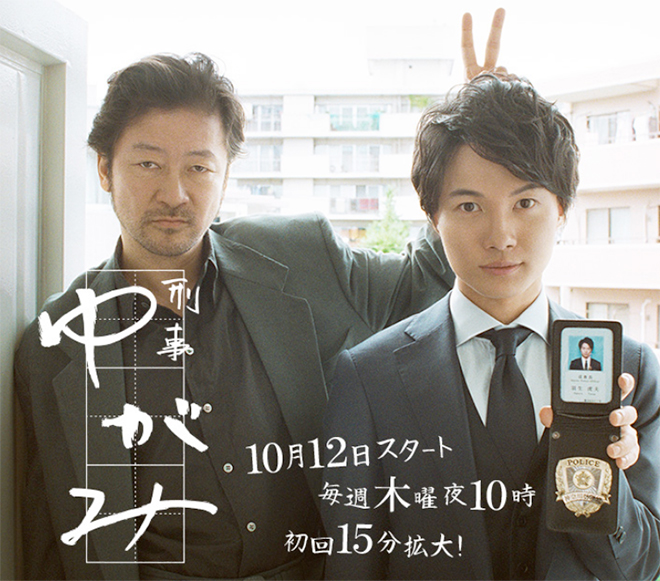 Story
Yugami Yukimasa is a detective of Ukiyo Police Precinct’s Violent Crimes Section. He is proper, disciplined and an eccentric who dislikes working together with people. However, once there is a case, he defies common logic and labels, and simply chases after facts. It does not matter if the case he is dealing with involves a minister of the government, a local teacher trusted by everyone in the town or even a serial killer. He questions the people and things which everyone believe in, and keenly observes the darkness lurking in the depths of people’s hearts with no preconceived notions. His partner is Hanyu Torao, an ambitious and righteous young detective. As Yugami has no qualms about illegally investigating cases, he is a nuisance to Hanyu who wants to quickly progress in his career. The two of them make an odd pair as they go about solving all sorts of cases. Even Kanno Rika who is heads the section and joined the police at the same time as Yugami, has a hard time with him for doing as he pleases. One day, the dead body of Oshida Mai, a female university student, is found face up under an overhead bridge. Her estimated time of death is 1 am and there is a high possibility that Mai had fallen down the stairs while on the way home after having drinks. However, once Yugami sees the dead body, he senses something and involves Hanyu in the investigation he starts on his own. He also obtains information from a hacker Hikawa Kazumi and goes to meet Mai’s friend Kurama Aiko who drank with her on the day of the incident. Then Aiko reveals that almost one week ago, Mai caught a molester inside a train. Because she accepted cash from the man, she could not report him to the police and began to face harassment from that night. Yugami and Hanyu visit Ukiyodai Station where the molest took place and hear from a station staff, Sakaki Nozomi, who had been on duty that day. Nozomi and Hanyu turn out to be former junior high school classmates, and they find a man suspected of molest with her assistance.

Characters
Asano Tadanobu as Yugami Yukimasa
A brilliant and eccentric detective with unique powers of deduction. He has no qualms about illegally investigating cases and no preconceived notions no matter who the persons are in order to unravel the truth. He is usually devious and twisted but when there is an investigation, he can read the minds of criminals with his keen powers of observation and begins to show them up for what they really are with his clever words.

Kamiki Ryunosuke as Hanyu Torao
A rookie detective who is Yugami Yukimasa’s partner. He is a high achiever, earnest and righteous. But he also posseses deviousness given his desire to boost his score by arresting criminals quickly. He is at the mercy of Yugami who has no qualms breaking the rules.

Inamori Izumi as Kanno Rika
The head of Ukiyo Police Precinct’s Violent Crimes Section which Yugami Yukimasa and Hangu Torao belong to. Rank: Assistant Inspector. She has thrived in the male-dominated police organisation and advanced in her career unlike Yugami. They are peers from their days in the police academy. Although as a manager, she always gets irritated with Yugami for doing as he pleases, she trusts in his brilliance as a detective and is his ally when it comes to the crunch. She wants Hanyu Torao to learn from Yugami the essence of being a detective.

Yamamoto Mizuki as Hikawa Kazumi
An androgynous, crack hacker. She supports Yugami Yukimasa’s investigations with research capabilities that use of her extensive cyber knowledge. She does not belong to the police and accompanies Yugami on his independent investigations. She lost her voice as a result of a big case which she got entangled in in the past and actually has a deep connection with Yugami.

This blog contains information and musings on current and upcoming Japanese dramas but is not intended to be comprehensive.
View all posts by jadefrost →
This entry was posted in Fall 2017 Dramas, Fuji TV and tagged Asano Tadanobu, Inamori Izumi, Kamiki Ryunosuke, Keiji Yugami. Bookmark the permalink.