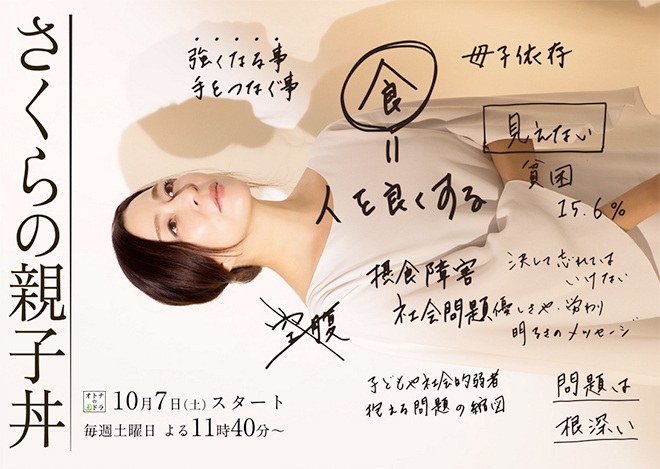 Story
52-year-old Tsukumo Sakura runs Tsukumodo, a secondhand bookstore which stands alone in the Ota district of Tokyo. People of all generations visit this shop which revolves around manga. At the back of the bookstore is a room called Tamariba. It is a place where Sakura offers free oyakodon to hungry people with nowhere to go. It fills stomachs and also seems to warm hearts. With their hunger satisfied, these people “with nowhere to go” slowly start to talk to her about themselves and she listens to them. Sometimes she encourages them with a smile. At other times, she cries with them. She loves to say “It’s all right to cry when you want to. The teardrops that fall will simply burst into flowers of happiness.” A teenage girl Ninomiya Azami who has left home, has been misbehaving with Masaki Rie and others every day. One night, Azami and Rie take refuge in a park after being pursued by gangsters. Hunger drives Azami to Tamariba which Rie had heard is a place where oyakodon can be eaten for free. People slightly marginalised by society such as Kimizuka Tatsuya who has been working hard for the sake of his younger sister after coming out of a juvenile correctional institution, Tamaki Gen who is good at drawing but has difficulty communicating, delinquent and socially reclusive youths hang out there. Sakura serves oyakodon to Azami and Rie without poking and prying deeply despite their sudden visit. The two girls voraciously eat the meal which has been made with love. However, Sakura firmly rejects them when they request to stay for a night because they have no place to go. Moved by the delightful oyakodon, Azami strikes a defiant attitude but frequents Tamariba. One day, she begins to talk to Tatsuya about her background. When she was a year old, her mother was almost murdered and a high school student waiter who intervened was killed. Sakura who had been casually listening to Azami’s story, stands in daze. In fact, Sakura’s son had died after getting involved in an incident. How will she react to this encounter with Azami which one can describe as a twist of fate?

Characters
Maya Miki as Tsukumo Sakura
The owner of Tsukumodo, a secondhand bookstore. She got married and had a boy and girl but when her son was 17 years old, he got entangled in an incident caused by a young girl and died. After that, she got a divorce and became a single mother. The girl’s trial makes her think that an empty stomach is the cause of delinquency. When she sees hungry people who have nowhere to go, she cannot leave them alone and feeds them oyakodon. She has a pure and straightforward personality.

Yoshimoto Miyu as Ninomiya Azami
A 17-year-old girl. She was adopted by a relative’s family as a child but grew up without feeling loved and left home at the age of 15. She is drawn to the taste of Tsukumo Sakura’s oyakodon and her capacity to accept people, and settles in Sakura’s apartment. She begins to open her heart to Sakura who treats her like a real mother

Motokariya Yuika as Tsukumo Kyoko
Tsukumo Sakura’s daughter. 16 years ago, her older brother got involved in an incident which traumatised her. But she has overcome it and is now a freelance writer. She has left home and lives alone.

Tsukada Ryoichi as Nakanishi Shunta
A butcher shop’s employee who delivers the chicken meat and eggs which Tsukumo Sakura uses for her oyakodon. He used to be the leader of a motorcycle gang which controlled parts of Kanto. He is a childhood friend of Sakura’s late son and has been going in and out of Tsukumodo since he was a child. Even he cannot say no to her. He also understands her well and informs her about the appearances of the people who frequent Tsukumodo.

This blog contains information and musings on current and upcoming Japanese dramas but is not intended to be comprehensive.
View all posts by jadefrost →
This entry was posted in Fall 2017 Dramas, Fuji TV and tagged Maya Miki, Motokariya Yuika, Sakura no Oyakodon Series. Bookmark the permalink.

1 Response to Sakura no Oyakodon Season 1