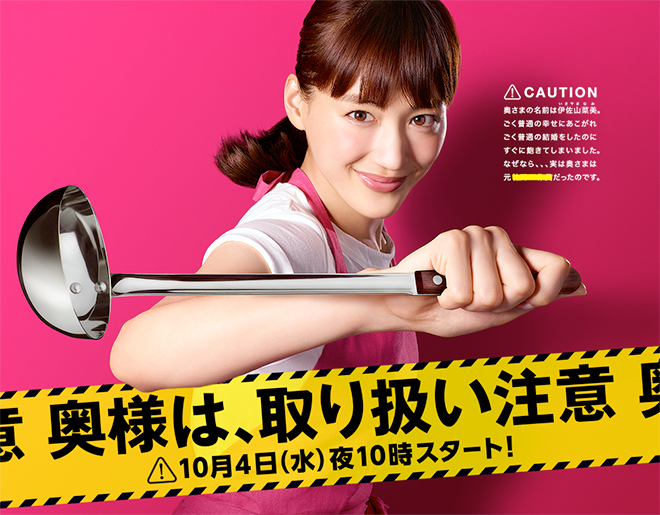 Story
30-year-old Isayama Nami is a newly-wed housewife who lives in a quiet, exclusive neighbourhood. She has been living peacefully with her husband Yuki, an IT entrepreneur whom she fell in love at first sight at a matchmaking party. Her immediate worry is her bad taste, complete hopelessness at cooking and a husband who will not eat dinner at home. In fact, Nami has a past that she hides from even her husband. Born an orphan, she is hooked on a life of thrills and survived without knowing love. She put this checkered past behind and staked her life on obtaining a warm family. However, after six months of marriage, Nami has become dissatisfied with an ordinary housewife’s ordinary family life. She now realises that the housewives who seem happy, have all sorts of problems. One day, she attends a cooking class at the invitation of her neighbours Ohara Yuri and Sato Kyoko who are housewives. Yuri is like a knowledgeable older sister while Kyoko comes across as an inquisitive, friendly younger sister. As Nami gets their advice about “housewives’ wisdom” which she has been a stranger to until now such as the ways to season dishes and create the atmosphere that will tempt her husband, she begins to experience kindness and warmth through friendships with females for the first them. Meanwhile, Nami instinctively senses that Chika who attends the same cooking class is being abused by her husband but hiding the fact, and consults Yuri and Kyoko. In an attempt to get Chika to open up, the three of them first decide to become her “good friend”. As they engage in mindless chatter, Chika begins to open her heart little by little and confesses that her life is being controlled by her husband Takashi. Nami, Yuri and Kyoko attempt to talk to him personally in order to help Chika but … … Will Nami able solve problems with the approach of a housewife?

Characters
Ayase Haruka as Isayama Nami
A new housewife. She is not good at housework but has a strong strong sense of righteousness and is extremely fierce once she gets angry. She will charge into dangerous places without regard for rules in the world, and fight against housewives’ problems.

Hirosue Ryoko as Ohara Yuri
A housewife who lives next to Isayama Nami. The mother of a 10-year-old son. She is like a knowledgeable, dynamic older sister.

Honda Tsubasa as Sato Kyoko
A housewife who lives next to Isayama Nami. She married her high school sweetheart Wataru. She is friendly and expressive.

Nakao Akiyoshi as Sato Wataru
Sato Kyoko’s husband. A salaryman who works for a electronics manufacturer. He has no authority and his mother, who lives together with them, indulges him.

Ishiguro Ken as Ohara Kensuke
Ohara Yuri’s husband. A university professor. He is popular with students but is the insensitive type.

Nishijima Hidetoshi as Isayama Yuki
Isayama Nami’s husband. She met him at a matchmaking party and fell in love at first sight. He is an IT entrepreneur.

This blog contains information and musings on current and upcoming Japanese dramas but is not intended to be comprehensive.
View all posts by jadefrost →
This entry was posted in Uncategorized and tagged Ayase Haruka, Hirosue Ryoko, Ishiguro Ken, Nishijima Hidetoshi, Okusama wa Toriatsukai Chuui. Bookmark the permalink.