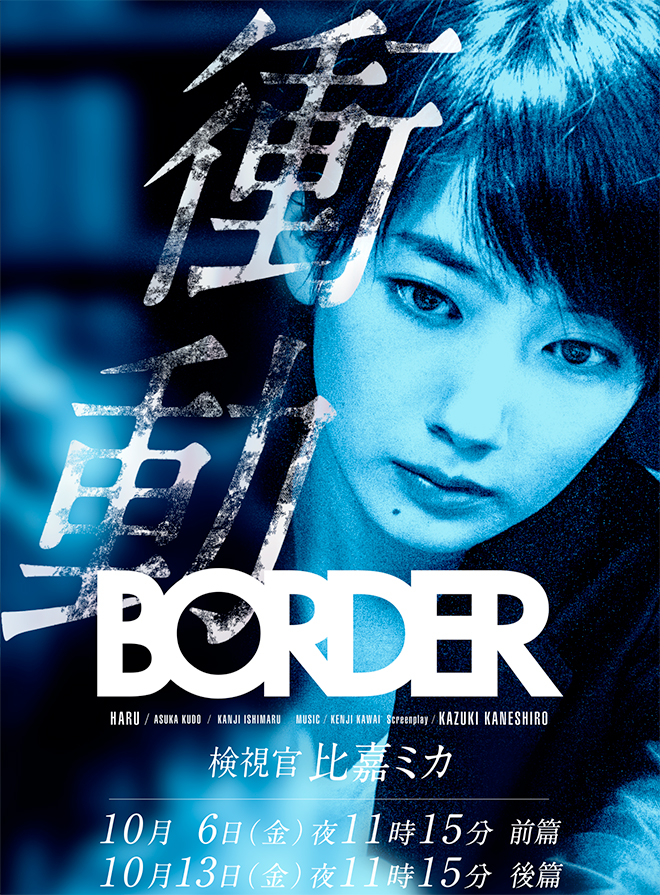 Date: From 9.00 p.m., 6 & 13 October 2017
Scriptwriter: Kaneshiro Kazuki (Okusama wa Toriatsukai Chuui, Crisis, Border)
Cast: Haru, Kudo Asuka, Ishimaru Kanji
Synopsis: Higa Mika (Haru) is an assistant at Eisho University’s school of forensic medicine. She works under Professor Asakawa Toru (Ishimaru Kanji) who has helped to solve a number of difficult cases through a combination of forensic medicine and criminal psychology, and even appeared on TV programmes as a commentator. However, he got to this position owing to hints from Mika to solve cases. Mika originally wanted to be a physician but became aware of the appeal of forensic medicine when she was in university. She has been feeling gloomy that she cannot be given independence in this male-dominated world. This is despite the experience she has gained in postmortem and autopsy, and Asakawa’s recognition of her exceptional observation skills and intuition. At that moment, the body of a female junior high school student who was strangled to death is found in the jurisdiction of Nishihara Police Precinct in Tokyo. In addition, the body is in a brutalised state that repulses people. As Ogura Akane (Kiyohara Kaya) and other students receive word of the sudden, violent death of their classmate, sorrow and fear show on their faces. Meanwhile, Mika is brought by Asakawa to the scene where the dead body was discovered. However, Asakawa’s perfunctory profiling and high-handed attitude puts off Detective Nakazawa Fumiaki (Kudo Asuka) of Nishihara Police Precinct’s First Investigative. Then a second murder occurs … …
Official Website: www.tv-asahi.co.jp/border_higamika

This blog contains information and musings on current and upcoming Japanese dramas but is not intended to be comprehensive.
View all posts by jadefrost →
This entry was posted in Fall 2017 Drama Specials, TV Asahi and tagged Border Series. Bookmark the permalink.