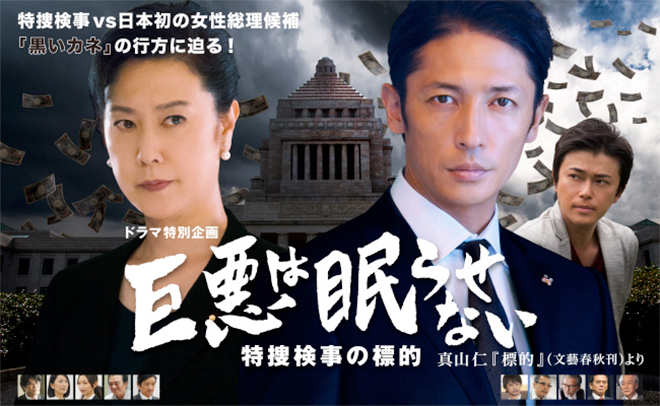 Date: From 9.00 p.m., 4 October 2017
Scriptwriter: Kaneko Arisa (Boku no Tsuma to Kekkon Shite Kudasai, Zainin no Uso, Tightrope no Onna)
Original Work: Baikoku by Mayama Jin
Cast: Tamaki Hiroshi, Katsuji Ryo, Hagiwara Masato, Hada Michiko, Takizawa Saori, Nakamura Shunsuke, Tanaka Tetsushi, Kurokawa Tomoka, Honda Hirotaro, Tamura Ryo, Shiba Toshio, Iwaki Koichi, Okuda Eiji, Natori Yuko
Synopsis: Minister of Health, Labour and Welfare Koshimura Miyabi (Natori Yuko) is elected the new leader of the Democratic Liberal Party. A capable politician of action, she enjoys strong support from the public. The extraordinary Diet session is one month away. While the country is excited about the news of the emergence of Japan’s first female Prime Minister, Tominaga Shinichi (Tamaki Hiroshi) and the other members of the Tokyo District Public Prosecutor’s Office’s Special Investigation Department watch the news quietly. One month ago, Tominaga and Fujiyama Ayumi (Takizawa Saori) were summoned by deputy chief Hase Kiichi (Okuda Eiji) and told that their next target is Miyabi. Several days earlier, Miyazaki Hozumi (Honda Hirotaro), a former public prosecutor who now works as a lawyer, had showed up with Kataoka Shiro who used to be in charge of medical consultancy JWF’s debts in front of their chief Iwashita Nozomi (Hada Michiko). According to Kataoka, JWF’s CEO Gakuden Kyohei (Nakamura Shunsuke) had given Miyabi bribes. In return, he had pressed for a crackdown on rival companies and an amendment of the law. Furthermore, the two of them planned to enact a bill which would control housing for the elderly with home care services provided. These are facilities for the elderly who are unable to move into expensive homes. Because the facilities can be easily constructed without waiting for a license, it has become a social problem as a result of the increase in unscrupulous operators. At that moment, Miyabi makes up her mind to run in the election and asks the current Prime Minister Mayuzumi Arata (Shiba Toshio) to be her sponsor. Several days later, Mayuzumi who has been told that he will be made the top advisor after Miyabi is elected, names Miyabi his successor in front of the media. Miyabi has a husband Shunsaku (Iwaki Koichi) who used to be involved in political activities and now runs a sake brewery in Kanazawa. He supports her but is apprehensive about taking Mayuzumi as her sponsor. Together with Igarashi Tetsuo (Hagiwara Masato) and the rest, Tominaga questions Miyazaki and Kataoka. The evidence in Kataoka’s possession is the voice of Miyabi demanding 3 million yen to make her opponents change sides in order to pass the bill. Kataoka delivered the money with Gakuden but did not see it change hands. A flustered Miyazaki produces a copy of a secret ledger as evidence. However, there are too many uncertainties so the details of the questioning cannot become evidence. Tominaga has a strange feeling about Miyazaki who is fixated on accusations against Miyabi. Meanwhile, a newspaper journalist Kanbayashi Yuta (Katsuji Ryo) who is gathering information on such housing for the elderly, visits Gakuden to hear the details. Gakuden explains that legislation is necessary as he is planning even more expensive facilities. Kanbayashi suspects he is plotting to make easy money through the nursing care business with the backing of the government. Miyabi learns that the recording of her voice with Gakuden’s was brought to the Special Investigation Department and is stunned. While Mayuzumi rejects Miyabi’s side of the story as an excuse, he lets her off this once. The Special Investigation Department is soon ordered by the Ministry of Justice to stop the investigation. Even so, Tominaga takes it upon himself to continue the investigation and tries to search for conclusive evidence but … … Is everything a scheme related to the election?
Official Website: www.tv-tokyo.co.jp/kyoaku2017

This blog contains information and musings on current and upcoming Japanese dramas but is not intended to be comprehensive.
View all posts by jadefrost →
This entry was posted in Fall 2017 Drama Specials, TV Tokyo and tagged Katsuji Ryo, Kyoaku wa Nemurasenai Series, Okuda Eiji, Tamaki Hiroshi. Bookmark the permalink.