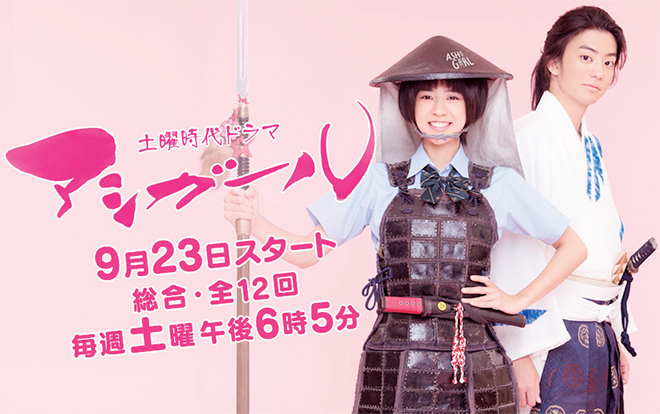 Story
Hayakawa Yui is a 16-year-old drifting through high school life. Her only redeeming quality is her ability to run fast. One night with a full moon, Yui gets sent back in time to the Sengoku Period through a time machine built by her younger reclusive brother Takeru who likes inventing things. When she awakens, she is greatly confused but is given armour and blends in with the army of foot soldiers. Yui’s identity is questioned and she uses the name Tadanosuke to cover up. She had despaired but falls in love at first sight with a brave, young warrior who appears in front of her. He is Hagi Kuhachiro Tadakiyo, the heir of the feudal lord of the Hagi clan. One thing leads to another and Yui finds shelter as Tadanosuke, the son of a village lady Yoshino. Not knowing when she will be able to return to modern times, she heads to the castle with the sole purpose of seeing Tadakiyo again. To protect her beloved young lord, she becomes a foot soldier of the Hagi clan and runs in the battlefield. Yui uses love and leg strength to survive in these turbulent times. Her random power born of love moves the people she meets, changes the people she loves and eventually shakes up the Sengoku Period.

Characters
Kuroshima Yuina as Hayakawa Yui
A high school girl who whose only redeeming quality is her ability to run fast. She does as she pleases. One day she ends up travelling back in time to the Sengoku Period and falls in love at first sight with the young lord Tadakiyo whom she meets. She becomes a foot soldier in an attempt to protect him.

Kentaro as Hagi Kuhachiro Tadakiyo
The cool-headed, intelligent heir of the Hagi clan and son of Hagi Tadataka, a warlord of Sengoku Period. A brave military commander who goes to war to help his father. He is grown-up although he is just 18. He cares for his people who are suffering because of the war.

Matsushita Yuya as Hagi Nariyuki
Tadakiyo’s older brother. He cannot be the heir because of his mother’s low birth. He does not like martial arts and seems mild but his emotions cannot be discerned.

Tomosaka Rie as Yoshino
A widowed farmer in Umetani Village. She ends up adopting Hayakawa Yui as her “son” in an unexpected turn of events. She is a diginified, beautiful and smart woman.

Kawaei Rina as Matsumaru Ako
A young lady of noble birth from the Matsumaru clan. A betrothal to Tadakiyo is being pursued. She is cute and has an unexpectedly lively side.

Furutachi Kanji as Hayakawa Satoru
Hayakawa Yui’s father. He has been supporting his wife who is a doctor as a stay-at-home dad. He takes things easy but is thorough in housework.

Nakajima Hiroko as Hayakawa Mikako
Hayakawa Yui’s mother. A doctor in private practice who has opened a clinic on her own residential property. She is candid and big-hearted.

Ishiguro Ken as Hagi Tadataka
The head of the Hagi clan. He has an ongoing feud with another feudal lord Koyama and is strict in the upbringing of his heir, Tadakiyo.

Issey Ogata as Amano Nobushige
A member of the Amano clan who has retired from active life. He has watched over Tadakiyo since childhood and vows absolute loyalty. He discovers that Hayakawa Yui is exceptionally swift on her feet.

This blog contains information and musings on current and upcoming Japanese dramas but is not intended to be comprehensive.
View all posts by jadefrost →
This entry was posted in Fall 2017 Dramas, NHK and tagged Ashi Girl Series. Bookmark the permalink.