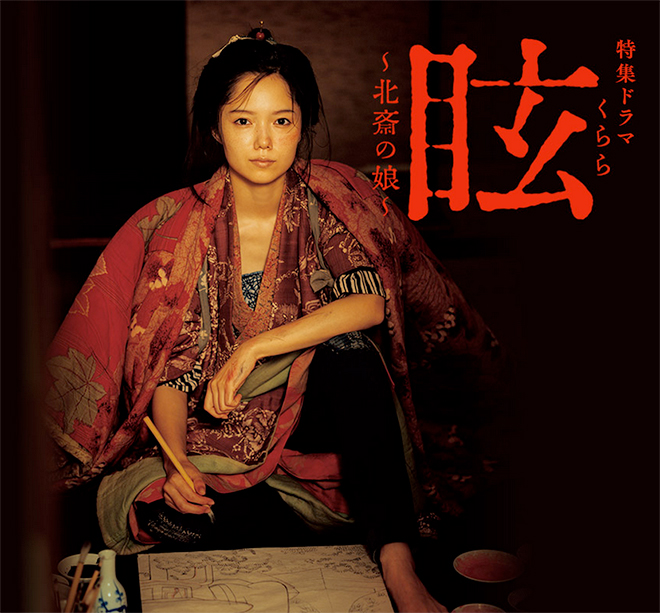 Date: From 7.30 p.m., 18 September 2017
Scriptwriter: Omori Mika (Kono Koe o Kimi ni, Asa ga Kita Series, Tokyo Bandwagon)
Original Work: Kurara by Asai Makate
Cast: Miyazaki Aoi, Matsuda Ryuhei, Miyake Hiroki, Nishimura Masahiko, Noda Hideki, Yo Kimiko, Nagatsuka Kyozo
Synopsis: Oei (Miyazaki Aoi), later known as Katsushika Oi, was born the third daughter of Edo’s talented painter Katsushika Hokusai (Nagatsuka Kyozo) and his second wife Koto (Yo Kimiko). Although Oei became the wife of a town painter for a time, her love of the paintbrush more than her husband spelt disaster and she comes back home to Hokusai from the family she had married into. This is how Oei starts to help her father out in his painting of the “insurmountable high wall”. Meanwhile, Oei can only talk to the painter Ikeda Zenjiro (Matsuda Ryuhei), who is her father’s student, about her pain and worries. Zenjiro has taken Edo by storm as Keisai Eisen, the master of ukiyo-e portraying beautiful women. He visits regularly because he admires Hokusai and secretly likes Oei although their relationship is like childhood friends. Oei respects her father whose paintings fascinated her and continues to work as a painter who supports him behind the scenes. When Hokusai’s masterpiece Thirty-six Views of Mount Fuji was completed, she was also by his side. As Hokusai progressed in age, he could no longer move the paintbrush as he wished but Oei continued to draw his paintings as her father’s “shadow”. She was content to be the shadow while he dazzled. And she kept on painting, obsessed with colour and shadow. Time eventually passes and by the time Oei has developed her own unique style, Zenjiro whom she had constantly turned to for support and even Hokusai have left this world. Now over 60 years old, Oei arrives at a single truth, “The shadow shapes everything. The light illuminates it. This world is made of light and shadow.”
Official Website: www.nhk.or.jp/dsp/kurara

This blog contains information and musings on current and upcoming Japanese dramas but is not intended to be comprehensive.
View all posts by jadefrost →
This entry was posted in NHK, Summer 2017 Drama Specials and tagged Kurara, Matsuda Ryuhei, Miyazaki Aoi, Nagatsuka Kyozo. Bookmark the permalink.