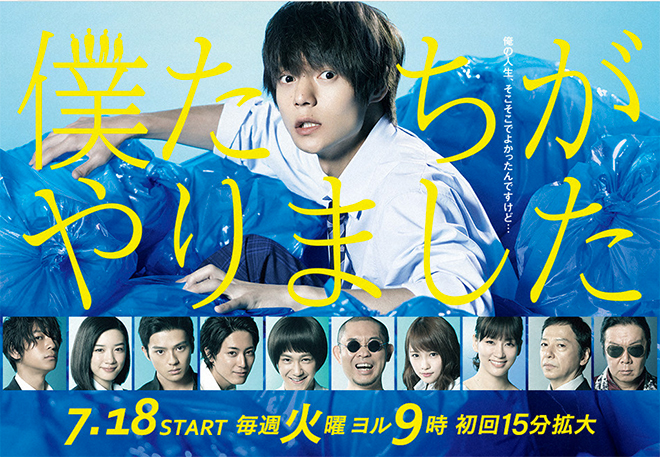 Story
A group of four friends – Tange High School students Tobio, Maru, Isami, and 20-year-old Paisen who graduated from high school a long time ago are contented with their lives. Silly Tobio is the kind who does not dream of bigger things and just wants to live modestly. Isami who is in high spirits about his new girlfriend Niizato Koyoi, Maru and Paisen enjoy bowling and karaoke, and spend their days fairly happily. Then, Ichihashi Tetsuto who studies at Yaba High School which is known as the hotbed of delinquents, directs his gang to physically assault the students of Tange High School and these incidents recur. Even the police step in to investigate the assault cases and the situation turns dire. Tachibana Natsumi, the form teacher of Tobio, Maru and Isami, is worried. One day, Tobio and Maru come across the delinquents from Yaba High School committing violence. In a low voice, Maru curses all the school’s students to die. But this is heard by Ichihashi and provokes his anger. And so, Maru gets marked. Meanwhile, Tobio sees his childhood friend Aokawa Renko coming home in the morning together with Ichihashi and is concerned about their relationship. Then one day, an incident happens that completely changes their ordinary routine. Ichihashi’s group captures Maru and bashes him up. Tobio, Isami and Paisen lose their cool at the sight of a bloody Maru. The gang sneers at this which fills Tobio with resentment. “We’ll kill you,” he vows. The next day, Tobio and the rest plant a home-made bomb at the school next door in revenge for Maru’s vicious beating at the hands of the delinquents. However, the bomb which was only intended to shock, ends up causing a huge explosion that claims many victims including friends and seniors. Tobio, Isami and Paisen have unwittingly become suspects in a bombing incident, and they choose to get away. This triggers the start of life on the run for these youths who cannot face up to reality.

Characters
Kubota Masataka as Masubuchi Tobio
A second-year student who attends Tange High School. He is a little aloof. As long as life is fun, he is happy. He does not have too much expectations of anything. He cares about his childhood friend Aokawa Renko but simply assumes that she will not take him seriously and gives up. His buddy Maruyama Yuki is treated badly by the delinquents of Yaba High School and this awakens some dormant emotions within him. He vows “We’ll kill you” and calls Isami and the rest over … …

Nagano Mei as Aokawa Renko
Masubuchi Tobio’s childhood friend. A second-year student at Tange High School. Beautiful, stylish and sophisticated, she is the idol of both the male and female students around her. She is a cheerful, dignified girl who has fortitude. She secretly has feelings for the immature and awkward Tobio. Although he irritates her, the distance between them slowly starts to shrink but … …

Hayama Shono as Maruyama Yuki (Maru)
Masubuchi Tobio’s buddy. A second-year student at Tange High School. His mushroom hairstyle is his trademark. He is the cute, bullying victim. He gets lonely easily and loves hanging out with Tobio and the rest more than anything else.

Mamiya Shotaro as Isami Sho
Masubuchi Tobio’s buddy. A second-year student at Tange High School. He is handsome and gets carried away easily. He loves girls and is the most knowledgeable and experienced in this area among the four. Although he is dating a junior Niizato Koyoi, he currently thinks of it as a fling.

Konno Hiroki as Kosaka Hidero (Paisen)
An alumni who graduated from Tange High School a long time ago. He always turns up where Masubuchi Tobio, Maruyama Yuki and Isami Sho are and hangs out together. His parents are actually outrageously wealthy and have the power to use money to solve most things. However, he is unemployed, unattached and also has a tenuous relationship with Tobio and the others which is connected by money.

Mizukawa Asami as Tachibana Natsumi
An English teacher at Tange High School. The form teacher of Masubuchi Tobio, Maruyama Yuki and Isami Sho. She is beautiful, kind and caring, and popular even with her students. However, no one knows what she thinks deep down. She makes people feel that she is plotting something in secret.

Miura Shohei as Iimuro Naruo
A detective whose jurisdiction covers Tange High School. He coolly and even brutally drives criminals into a corner. He is willing to use aggressive investigation methods which border on illegal for the sake of arrests.

Furuta Arata as Wajima Sojuro
A mysterious man who controls the underworld. He has been singled out by Iimuro Naruo but completely brushes him off. As the story progresses, his true identity is gradually revealed.

This blog contains information and musings on current and upcoming Japanese dramas but is not intended to be comprehensive.
View all posts by jadefrost →
This entry was posted in Fuji TV, Summer 2017 Dramas and tagged Bokutachi ga Yarimashita, Furuta Arata, Itao Itsuji, Kubota Masataka, Miura Shohei, Mizukawa Asami, Nagano Mei. Bookmark the permalink.