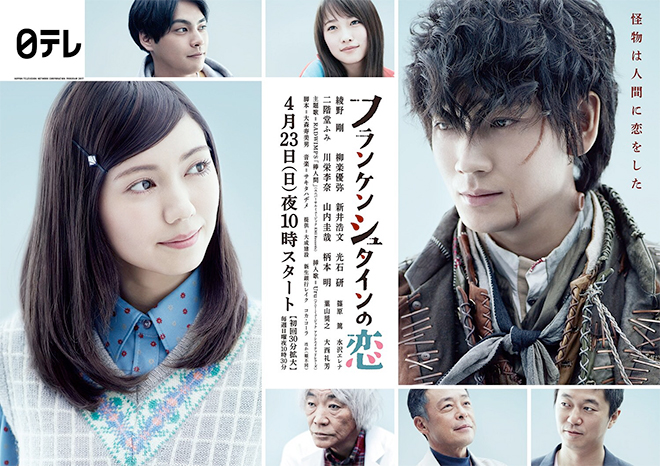 Story
An incident over 100 years ago led to a professor’s creation of a monster with a human-like form but definitely not a human-like appearance. And yet, this immortal monster has more compassion than any human in existence. Hiding deep in the forest, he lives a quiet and lonely life, and dreams of the day he can live as a human being even though he knows this is impossible … … Tsugaru Tsugumi, a student at the government-run Fugaku University’s Department of Agriculture, belongs to the lab of Professor Tsurumaru Toyofumi who specialises in life sciences. She studies fungi including mushrooms and has such an avid interest in mushrooms that Inaba Seiya and the other graduate students in the same lab have given her the nickname “Kinojo”. One night, Tsugumi goes for drinks with men who claim to be medical students. They force her to get drunk and she ends up being taken away in a car. Watching for an unguarded moment, she jumps out of the car and takes refuge in a forest in the mountains. Then someone suddenly appears in front of Tsugumi and knocks the men down. When Tsugumi regains consciousness, she is at a bus stop that is at the entrance to the mountains. She realises that her clothing is coated with small red mushrooms. This is a rare species of mushroom called akanarikamitake. Tsugumi enters the forest to search for the mushrooms and encounters the monster. He leaves after cryptically saying that he is not human. While following him deep into the forest, she reaches his home. This is where the monster has lived for 120 years. Tsugumi presses him to tell her about himself. He says that he died once but was brought back to life by his father Fukashi Kentaro who was a medical professor. After his father’s death, he learned about the human world by listening to a discarded radio and gathered things that people threw away as he reminisced about what it is like to live as a human. He is a monster who cannot live with human beings. Feeling his loneliness, Tsugumi takes him out of the forest. The monster who has known no other human being in 120 years besides his father, begins to come into contact with Tsugumi and the people around her. He starts to learn about love, friendship and the world. Tsugumi does not realise his true nature, and they fall in love with each other. However, his body holds a secret that prevents him from touching any human being.

Characters
Ayano Go as the Monster
A monster who was brought back to life from the dead, and will never age and die. Although he has big scars on his face and body, he does not look like a monster. He is human-like and kinder than humans. He meets Tsugaru Tsugumi and soon falls in love. He begins to learn about the world. However, he has a secret. He cannot touch any human being.

Nikaido Fumi as Tsugaru Tsugumi
She attends the Department of Agriculture at university and studies fungi. She has had a weak constitution since childhood and because she spent her youth near death, she is uninterested in life. One day, a strange man appears in front of her and she falls in love with him without realising that he is a monster.

Yagira Yuya as Inaba Seiya
A graduate student who belongs to the same university lab as Tsugaru Tsugumi. He likes her. But a love triangle develops. He starts to form a friendship with the monster but is often depressed and jealous because he feels that he is a sham when compared to the monster.

Kawaei Rina as Murozono Mikoto
A former delinquent who grew up in an unhappy family and ran away from home. She was picked up by Inaba Seiya’s father when she was wandering the streets and brought up to be an artisan. She actually likes Seiya.

Arai Hirofumi as Amakusa Junpei
A DJ on the monster’s favourite radio programme who is in charge of giving people advice about their problems. He encounters the monster and learns his secret. He even becomes the person whom the monster consults about love.

Mitsuishi Ken as Inaba Keijiro
Inaba Seiya’s father. The company president of an engineering firm. A skillful man who is full of compassion and the spirit of a craftsman. He finds people who have nowhere to go and brings them up to be artisans.

Emoto Akira as Tsurumaru Toyofumi
Tsugaru Tsugumi and Inaba Seiya’s professor. He has a doctorate in agriculture. He begins to research whether ordinary human beings can have the body of the monster. He thinks that the monster’s cells can be used to help treat the illnesses of a great number of people and the human quest for eternal life may be within reach but … …

This blog contains information and musings on current and upcoming Japanese dramas but is not intended to be comprehensive.
View all posts by jadefrost →
This entry was posted in NTV, Spring 2017 Dramas and tagged Arai Hirofumi, Ayano Go, Emoto Akira, Frankenstein no Koi, Mitsuishi Ken, Nikaido Fumi, Yagira Yuya. Bookmark the permalink.