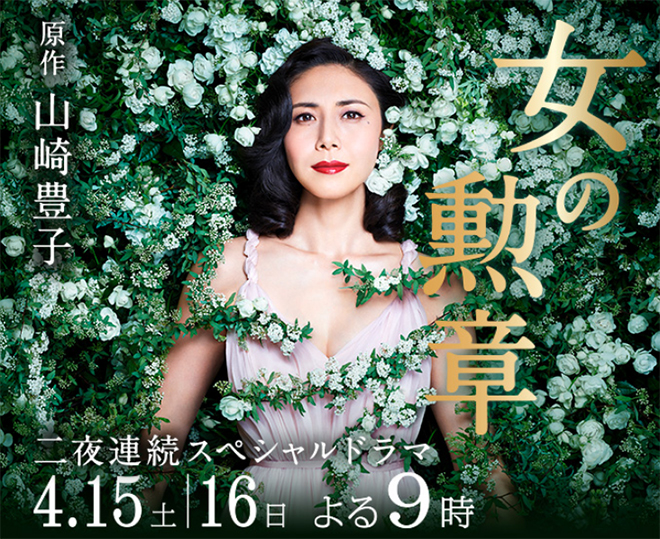 Date: From 9.00 p.m., 15 & 16 April 2017
Original Work: Onna no Kunsho by Yamasaki Toyoko
Scriptwriter: Asano Taeko (Hapimari, Dakara Kouya, Utsukushiki Wana)
Cast: Matsushima Nanako, Tamaki Hiroshi, Mimura, Aibu Saki, Kinami Haruka, Suruga Taro, Enami Kyoko, Ozawa Yukiyoshi, Asano Yuko, Nagatsuka Kyozo
Synopsis: Born to a wealthy, well-established wholesale cloth merchant in Osaka, Oba Noriko (Matsushima Nanako) was forced to observe customs and conventions from a young age and had a typical upbringing. But she lost her family and home in the war. Amid the devastation, she felt that the time for Western-style and women’s clothing had come. After that, Noriko opened up a room in her house in Kobe and started dressmaking classes with her sewing machine. Over the course of the next few years, her classes quickly gained popularity and she tries to set up a dressmaking school in Koshien together with three of her apprentices Tsugawa Michiko (Mimura), Tsubota Katsumi (Aibu Saki) and Ogi Tomie (Kinami Haruka). That is when a handsome man Yashiro Ginshiro (Tamaki Hiroshi) shows up and urges her to hire him. A Tokyo University graduate and the fourth son of a businessman who deals with cloth for menswear, he quit his job at a top company after two years to help out in the family business. However, Yasuda Kaneko (Asano Yuko), the chairwoman of the Kansai Designers Association, stands in the way of Noriko who is close to opening Seiwa Dressmaking Academy. A veteran in this field and queen of the fashion industry, she hates Noriko who has emerged as an up-and-coming designer, and attempts to thwart the opening of her school. Ginshiro gradually takes control of the school as he helps Noriko amid the whirl of ambition and desire. Noriko achieves success as a school owner and designer, and spreads her wings in the fashion world from Osaka, Tokyo to Paris. However, she is both physically and emotionally weary because of her jealousy of Ginshiro’s relationships with her three apprentices. Then Ginshiro’s former teacher Shiraishi Yosuke (Nagatsuka Kyozo), a university professor in French literature, starts to become a refuge for Noriko. The fate that awaits her future … …
Official Website: www.fujitv.co.jp/kunsho