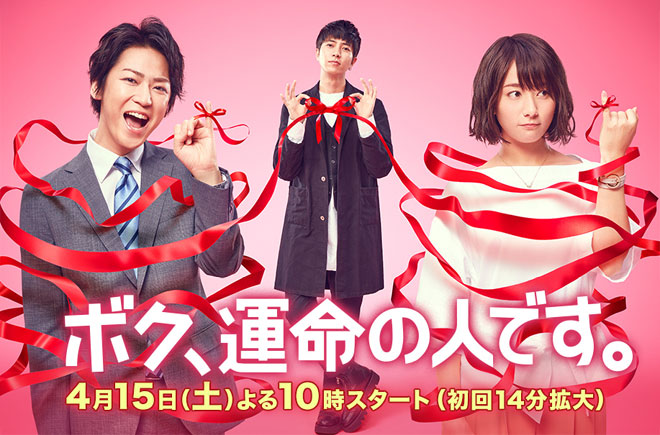 Story
29-year-old Masaki Makoto has transferred to a company in Tokyo from Shizuoka. He has no luck with women and difficulty dating for some reason so his romances keep ending in breakups. Then one day, a mysterious guy who proclaims himself “god”, suddenly appears in front of Makoto. He bluntly tells Makoto all of a sudden, “I’m afraid you’re being deceived” on the subject of the woman whom Makoto is currently dating and believes to be person of his destiny. Makoto gets mad but the mysterious guy turns on the TV and he sees the woman being arrested as a suspect in a scheme to trick men into compromising situations and blackmail them. Maktoto is stunned and laments his bad luck. The “god” says, “That’s because you have a true soul mate. You haven’t realised it yet, but only a wall separates you from the one you must fall in love with.” Then he holds out a photograph of Kogetsu Haruko to him. But Makoto does not know Haruko. The “god” tells him that even though he is not acquainted with Haruko, they have actually crossed paths many times – at the beach when he was 5 years old, at the venue for their university entrance exam and at their first visit to a shrine in the New Year this year. And now, she works in the office next to his company. And yet they do not know each other’s name nor recognise each other’s face. Haruko will be 30 this year and has not been lucky with men. She hopes to be romantically involved with someone who is reliable and practical and thinks, “Let’s make the next person the last romance”. Makoto is skeptical about this curious destiny that the mysterious man had told him about. The next day, he happens to ride in the same elevator with Haruko and gets flustered. However, he musters the courage to call out to her in what is almost their first meeting, “Er, I’m the man of your destiny.” But Haruko naturally finds his sudden declaration creepy and he is rejected in spectacular fashion. That is how their love story begins from this disastrous encounter. Even after this, Makoto naively continues his attack in the belief that Haruko is the one for him. Then a love rival appears in the form of Sadaoka Mitsukuni, Haruko’s former high school classmate … …

Characters
Kamenashi Kazuya as Masaki Makoto
An employee of a company that sells water dispensers. His past romances have all been disastrous but this completely changes through his encounter with a mysterious guy who calls himself god. He is taken in by the words of the “god” and comes face to face with the woman of his destiny.

Kimura Fumino as Kogetsu Haruko
She works in the office next to Masaki Makoto’s company. She is a realistic person who acts after she thinks. Now that she is turning 30, she has become conscious of the word “marriage” and is increasingly cautious.

Nanao as Yotsuya Mie
Kogetsu Haruko’s good friend and drinking buddy who shares in both the good times and the bad. She enjoys a life of independence and has many hobbies. Although she speaks her mind, she is impossible to hate and deals with people with the ideal sense of distance.

Tanabe Seiichi as Karasuda Shokichi
The head of the department which Masaki Makoto belongs to. He is a wonderful boss who observes what is going on around him and even reach out to parts that no one notices. As a result, he unwittingly exerts influence on Makoto’s romance.

Yamashita Tomohisa as Mysterious guy
A self-proclaimed god who suddenly appears in front of Masaki Makoto. He establishes that Kogetsu Haruko is the woman of Makoto’s destiny and tells him that this love is essential to the earth. Although he delights in Makoto’s romance, it is not clear what he is thinking.

This blog contains information and musings on current and upcoming Japanese dramas but is not intended to be comprehensive.
View all posts by jadefrost →
This entry was posted in NTV, Spring 2017 Dramas and tagged Boku Unmei no Hito desu, Kamenashi Kazuya, Kimura Fumino, Tanabe Seiichi, Yamashita Tomohisa. Bookmark the permalink.