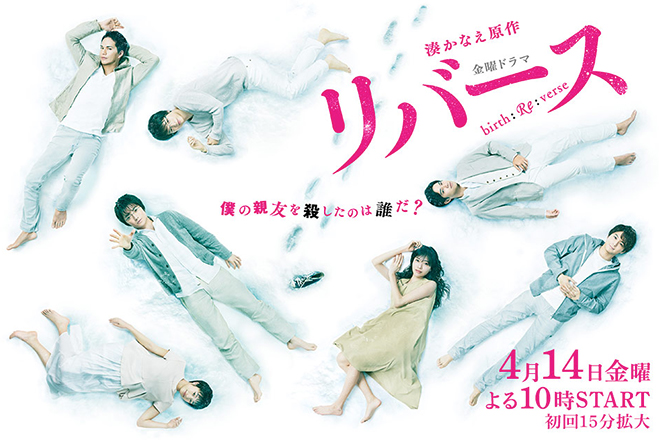 Story
Salaryman Fukase Kazuhisa graduated from a famous university but his life is very ordinary and unremarkable. His only redeeming feature is brewing delicious coffee. His hobby – if it can be called that – is drinking coffee. Coffee, in fact, leads him to Ochi Mihoko, who becomes his girlfriend. Then one day, Mihoko receives a mysterious letter which consists of a single line, “Kazuhisa Fukase is a murderer.” Fukase is unable to hide his shock. But at this point, he recalls the promise between his university classmates to take the secret of the death of his only good friend Hirosawa Yuki which happened 10 years ago to their graves. His instinct tells him that the time has finally come to face “that incident”. One winter 10 years ago, Hirosawa died in an unfortunate, tragic accident during a snowboarding trip with university classmates Tanihara Yasuo, Asami Kosuke, Murai Takaaki and Murai’s younger sister Asuka. However, there is a big secret hidden in that accident. One day, Fukase gets a letter from the university he attended, informing him of a professor’s retirement party. Despite his fears of being reminded of Hirosawa, he heads to the event where he is reunited with Asami, Murai and Tanihara. Hirosawa’s mother Masako also attends. They feel awkward seeing her for the first time in eight years after Hirosawa’s death. Meanwhile, Ogasawara Toshio, a freelance journalist pursuing the truth of the accident 10 years ago, watches Fukase and the rest from a distance … … Letters have also been sent to Tanihara, Tanihara and Murai who also share in this secret, and even they are hit by a series of incidents. Fukase decides to confront the truth of the past in order to protect the people dear to him.

Characters
Fujiwara Tatsuya as Fukase Kazuhisa
He has lived with an inferiority complex that he is worthless since he was a student. Hirosawa Yuki whom he met through university lectures was the first good friend he had in life. Ochi Mihoko is now his girlfriend and feels that life will be better from now on. But one day, Mihoko receives a mysterious letter which consists of a single line, “Kazuhisa Fukase is a murderer.” He has to confront Hirosawa’s accident again in order to search for the sender but in the process of doing so, he begins to learn several secrets that were hidden at that time.

Toda Erika as Ochi Mihoko
Fukase Kazuhisa’s girlfriend. A beautiful, modest person. She works for a small bread shop. one day she meets Fukase at the specialty coffee shop where he is a regular and they soon begin to date. She takes pleasure in eating the leftover bread from the shop with the coffee that Fukase has made at his apartment.

Tamamori Yuta as Asami Kosuke
Although he belonged to the “flashy group” when he was a student, he has been serious and stoic in everything and now teaches world history in high school. He cares for his students but also gets into trouble with students and parents because he is strict. He feels responsible for Hirosawa Yuki’s death even now. After he receives a letter accusing him of murder, he begins to investigate the truth of the accident together with Fukase Kazuhisa.

Koike Teppei as Hirosawa Yuki
Fukase Kazuhisa’s only good friend. He went missing while on a graduation trip with university classmates and his dead body was found at the bottom of a cliff half a year later. At the time of the incident, it was suspected to be a murder but was eventually classified an accident. Fukase understood Hirosawa who belonged to the same “plain group” as him. But as he investigates Hirosawa, he gradually begins to unfold a face that he does not know.

Miura Takahiro as Murai Takaaki
He serves as his father’s secretary. He is waiting to take over his father’s constituency and stand for election, but is vexed that his father will not accept him. He has a pure heart and agonises over the pressure from his father. He married the daughter of a powerful Diet member and appears to be happy in public, but he is actually having an affair with Numabuchi Kotoha, a lawmaker of the Kanagawa Prefectural Assembly.

Kadowaki Mugi as Murai Asuka
Murai Takaaki’s younger sister. Because she liked Hirosawa Yuki who was her brother’s friend when she was a high school student and invited herself on their snowboarding trip. Although she has the good manners of a girl from a distinguished family, she is the type who is lively and expresses her opinion. After graduating from university, she got married to Tanihara Yasuo and is now a good wife and mother.

Ichihara Hayato as Tanihara Yasuo
He has a cheerful and lively character, does not discriminate and was the leader of the lecture group. He failed the university entrance exams and had to retake them a year later. After graduating from university, he joined a big trading company and soon got married to Murai Asuka, Murai Takaaki’s younger sister whom he had liked since he was a student. His life seems to be going well but he is suffering power harassment at work and relegated to an unimportant job but he cannot tell his wife about this.

YOU as Inui Kyoko
The wife of the owner of Clover Coffee, a specialty coffee shop which Fukase Kazuhisa is a regular at. She has a friendly personality and is also caring. She is the person who created the opportunity for Fukase and Ochi Mihoko to date and is also their confidant. She worries that their relationship has been slow to progress even though they have feelings for each other and feels frustrated.

Shiga Kotaro as Hirosawa Tadashi
Hirosawa Yuki’s father. He runs an orange farm in Ehime Prefecture. He wishes that his wife Masako who still cannot come to terms with the death of their son, will be saved some day.

Katahira Nagisa as Hirosawa Masako
Hirosawa Yuki’s mother. She runs an orange farm with her husband Tadashi in Ehime Prefecture. She had an easygoing, generous personality and was the ideal mother but all that changed after her son’s death. She still cannot accept that his death was an accident. Then one day, she learns that Fukase Kazuhisa and the others are investigating the accident 10 years ago … …

Takeda Tetsuya as Ogasawara Toshio
The detective in charge of the disappearance of Hirosawa Yuki which occurred within the jurisdiction of the Nagano Prefectural Police 10 years ago. He is one of the persons whose life was changed by this incident. Even though Hirosawa was found dead, he insisted to his superiors who were about to classify the death an accident that there is a likelihood that it was murder. Because of that, he was taken off the case and transferred to a remote place. He later resigned. After that, he became a freelance journalist and gets close to Fukase Kazuhisa and the others to pursue the truth of Hirosawa’s accident.

Murai Kunio as Murai Akimasa
The chairman of the Kanagawa Prefectural Assembly and father of Murai Takaaki and Asuka. He wants to groom his son into a politician but is also annoyed that Murai is still unreliable.

This blog contains information and musings on current and upcoming Japanese dramas but is not intended to be comprehensive.
View all posts by jadefrost →
This entry was posted in Spring 2017 Dramas, TBS/MBS and tagged Fujiwara Tatsuya, Kadowaki Mugi, Koike Teppei, Miura Takahiro, Reverse, Takeda Tetsuya, Toda Erika, YOU. Bookmark the permalink.