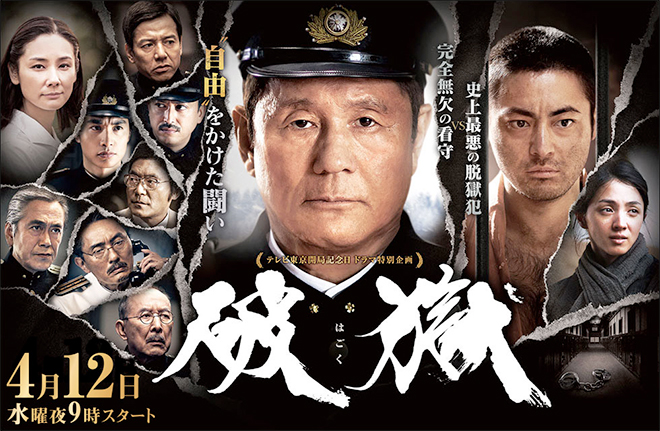 Date: From 9.00 p.m., 12 April 2017
Original Work: Hagoku by Yoshimura Akira
Scriptwriter: Ikehata Shunsaku (Natsume Soseki no Tsuma, Kamogawa Shokudo, Saka no Ue no Kumo Series)
Cast: Beat Takeshi, Yamada Takayuki, Yoshida Yo, Mitsushima Hikari, Hashizume Isao, Katsumura Masanobu, Ikeuchi Hiroyuki, Nakamura Aoi, Matsushige Yutaka, Terajima Susumu, Watanabe Ikkei
Synopsis: One late night in June 1942, an inmate named Sakuma Seitaro (Yamada Takayuki) dangles from the frame of a skylight in an isolation cell in Akita Prison. He forces open the glass window and breaks out of jail. The news of his escape even reaches the ears of Urata Susumu (Beat Takeshi), the chief warden of Kosuge Prison in Tokyo. Urata had been in charge of those sentenced to life in the prison until last year. Although Sakuma is a dangerous person who had also broken out of jail in Aomori, he submits to Urata who is the only person who had treated him kindly in the past. However, three months after escaping from jail, Sakuma shows up at Urata’s house. He has come to complain about the inhumane Akita prison officers. But he is locked up again after Urata notifies the police during an unguarded moment. A year later, Sakuma is sent to Abashiri Prison and Urata is also ordered to transfer as the prison’s chief warden. Before travelling to Abashiri, Urata visits the library where his daughter Miyoko (Yoshida Yo) works and tells her that he is transferring to Abashiri, but there is a somewhat strained atmosphere between the two of them. One month later, Urata, who has arrived in Abashiri, peers through a window with Izumi Goro (Katsumura Masanobu), the head of the Prisons Department as his guide. Sakuma, whose two hands have been placed in handcuffs, is devouring his meal with bare hands. The prison chief Nukui Senkichi (Hashizume Isao) is determined never to let him escape but Urata summons full-time prison officers Nomoto Kinnosuke (Nakamura Aoi) and Fujiwara Yoshita (Ikeuchi Hiroyuki), telling them that they have no way to win if they are half-hearted. He says this is exactly the time to catch Sakuma off guard. As anticipated, they discover that Sakuma’s handcuffs are off. Although Sakuma is violent, his expression changes and he obediently follows instructions when he notices Urata. Urata also finds the small tools that Sakuma had hidden, and his first jailbreak in Abashiri ends in failure. Sakuma was born in Aomori and his first offense was in 1933. He stole from a general store and killed the owner and family to save an accomplice. As a result, he received a life sentence. After reviewing his background, Urata goes to meet Sakuma’s wife Hikari (Mitsushima Hikari) who lives in Aomori. Hikari was once sold to a red-light district at the age of 17 because of her father’s debts and she could not extricate herself from that life. That was when she met Sakuma who worked for a crab canning factory on a boat. She thought this person who set her free and was offered a large advance loan from the company was god. But this caused Sakuma to sink into debt. Wanting to be by Sakuma’s side, Hikari screams that she hopes he will come back soon. Her words bring back memories of the Great Kanto Earthquake of 1923 to Urata. He could not go home immediately for some reason and when he rushed to the hospital, his wife and son were dead while a young Miyoko was seriously injured. Miyoko’s words telling him that she wished he had come back was like a knife plunged into his chest. Meanwhile, a road for military use is being built in Abashiri as a consequence of the prolonged war. Because many prison officers are escorting the prisoners who have been recruited to do the work, the duties get heavier for the remaining prison officers. A weary Nomoto is pressured by Sakuma’s usual attitude and unexpectedly complains to Urata. Urata tells Nomoto not to lose. Sakuma will back off once winter comes. Like Urata said, winter ends without a jail break. But something big and unusual is about to happen later that summer … …
Official Website: www.tv-tokyo.co.jp/hagoku