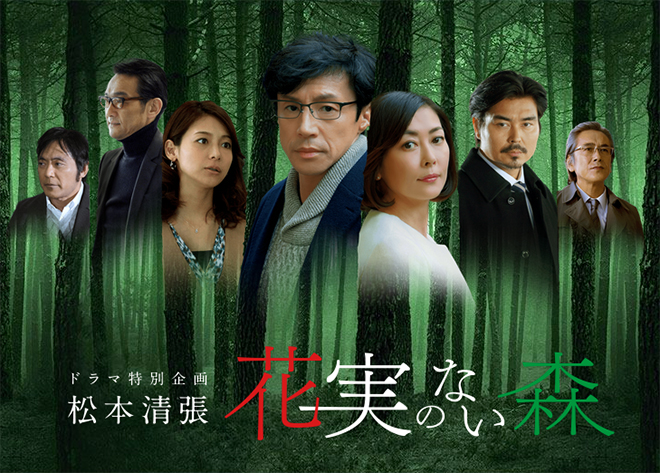 Date: From 9.00 p.m., 29 March 2017
Original Work: Kajitsu no Nai Mori by Matsumoto Seichou
Scriptwriter: Shinozaki Eriko (Rakuen, Copyface, Hippocrates’ Oath)
Cast: Higashiyama Noriyuki, Nakayama Miho, Ozawa Yukiyoshi, Aibu Saki, Owada Baku, Watanabe Ikkei, Washio Machiko, Nakahara Takeo, Kimito Takehiro, Fukikoshi Mitsuru, Terajima Susumu
Synopsis: Umeki Ryusuke (Higashiyama Noriyuki), a creative planner who works for an IT company, is capable but he is given the cold shoulder due to his competence at work. One rainy night, a middle-aged man Hamada Hiroshi (Owada Baku) appears in front of the car that Umeki is driving and tells Umeki to give him a ride to the hotel where he is staying. Umeki is bewildered by this sudden request but the dull-looking man is accompanied by an beautiful woman Eto Miyuki (Nakayama Miho) with an enchanting smile. Umeki gives the hitchhiking couple a lift to the hotel. When he casually glances at the backseat of the car, he notices that she had dropped an old pendant which she had been wearing. An poem from the Manyoshu, the oldest existing collection of Japanese poetry, is engraved on it. Umeki gradually starts to become preoccupied with the mysterious Miyuki. However, while getting to know Miyuki, he learns that the men who got close to her have been dying of suspicious causes one after the other. Is she a murderer? Umeki begins to probe her true identity without heed for his personal safety. What is the truth that he will arrive at?
Official Website: www.tv-tokyo.co.jp/kajitsu

This blog contains information and musings on current and upcoming Japanese dramas but is not intended to be comprehensive.
View all posts by jadefrost →
This entry was posted in Spring 2017 Drama Specials, TV Tokyo and tagged Aibu Saki, Fukikoshi Mitsuru, Higashiyama Noriyuki, Kajitsu no Nai Mori, Matsumoto Seichou, Nakayama Miho, Terajima Susumu. Bookmark the permalink.