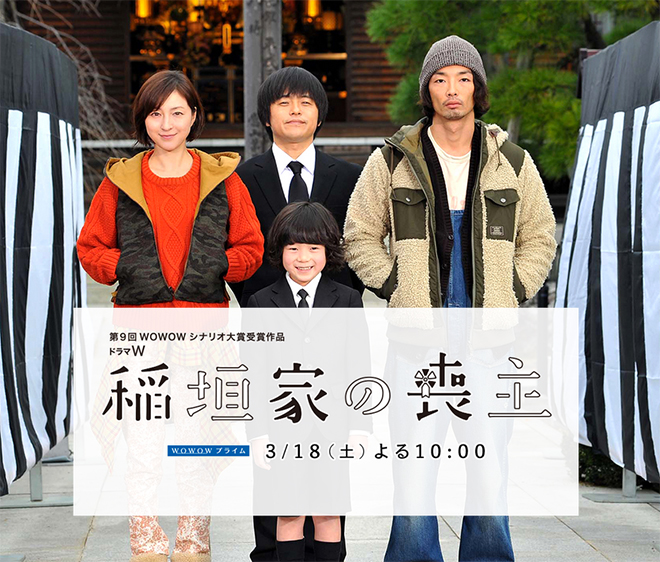 Date: From 10.00 p.m., 18 March 2017
Scriptwriter: Koyama Goro
Cast: Kanari Yuri, Hirosue Ryoko, Yoshizawa Hisashi, Matsumoto Wakana, Harada Kana, Konno Mahiru, Bakarhythm, David Ito, Sato Takashi, Shinohara Yukiko, Tsunogae Kazue, Moriyama Mirai
Synopsis: 7-year-old Inagaki Chuta (Kanari Yuri) is a second-grade elementary school student with extreme social phobia and feels terribly pained. One day, at the funeral ceremony for his grandfather Mokichi (Arifuku Masashi), Chuta sees his father Kotaro (Sato Takashi) stammer with nervousness while delivering his speech as the chief mourner. He comes to the realisation that the phobia runs in the family. Chuta had thought that he is still a long way off from having to make such a speech, but he perceives a fact. In his family, his aunt Kyoko (Hirosue Ryoko), a former career woman who worked for a large insurance company but resigned and now lives lethargically at home, and his uncle Shuji (Moriyama Mirai), a struggling manga artist who draws surreal four-frame manga as he works part-time, have been living together. Far from being married, the two of them are not dating or even attempting to. If they keep this up, he will have to be their chief mourner! Flustered by the gravity of his situation, Chuta seizes the golden opportunity when his parents talk about matchmaking Kyoko and tries to bring her and the divorced post office employee Matsumura Shohei (Yoshizawa Hisashi) together at his own birthday party. Then Shuji’s first love in high school (Matsumoto Wakana) who is supposed to be married suddenly appears before him and makes him waver. Will Chuta be able to get both Kyoko and Shuji to marry and avoid those speeches that await him in the future?
Official Website: www.wowow.co.jp/dramaw/inagakike

This blog contains information and musings on current and upcoming Japanese dramas but is not intended to be comprehensive.
View all posts by jadefrost →
This entry was posted in Winter 2017 Drama Specials, WOWOW and tagged Bakarhythm, Hirosue Ryoko, Inagaki Ke no Moshu, Moriyama Mirai. Bookmark the permalink.