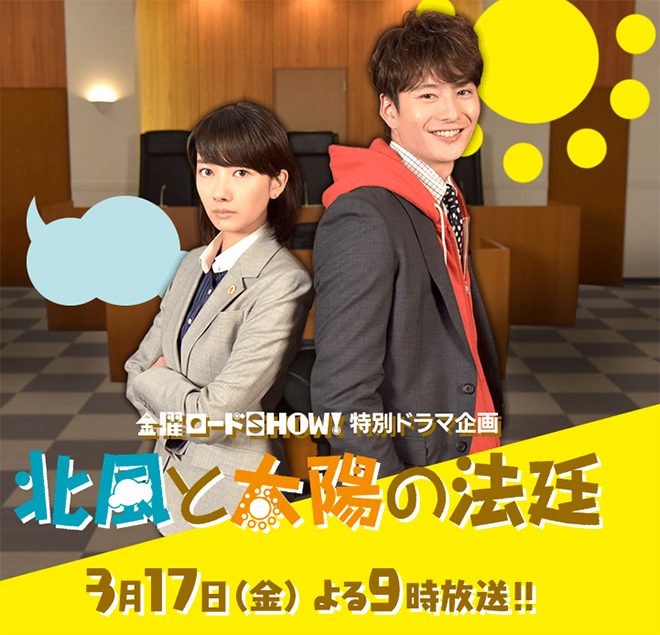 Date: From 9.00 p.m., 17 March 2017
Scriptwriter: Yokota Rie (Haburashi Onna Tomodachi, Hanasaki Mai ga Damattenai Series, Aru Hi Ahiru Bus)
Cast: Haru, Okada Masaki, Otani Ryohei, Yamamoto Yusuke, Kawashima Umika, Nakahara Takeo, Takahashi Hitomi, Nukumizu Yoichi, Uchida Rio, Ito Mamiko, Asakura Erika, Sakoda Takaya, Shima Takeaki, Miyaji Mao, Takezai Terunosuke, Tanaka Rei, Oshima Yoko, Yashima Norito, Kimura Midoriko, Ichimura Masachika
Synopsis: Sakuragawa Fuka (Haru), a hard-nosed lawyer of one of Japan’s largest law firms, mercilessly dispatches her opponents. An expert in divorce cases, she has never lost a case. One day, after a trial in which Fuka had cornered the defendant in court with her customary, perfect speech, Fuka is greeted by a strange guy in knickerbockers. This guy Kojitani Yota (Okada Masaki) speaks highly of her performance. Then he hugs her without warning and identifies himself as a lawyer. Meanwhile, Fuka is asked by her boss Isohata Koichiro (Otani Ryohei) to take on a divorce case. Hara Hisako (Takahashi Hitomi), the wife of the director of a large hospital, has asked for the divorce of her only son Shoji (Yamamoto Yusuke). The lawyer for Shoji’s wife Kyoko (Kawashima Umika) is the mysterious lawyer Kojitani Yota. Furthermore, Fuka learns that he belongs to the law firm of Tezuka Rokuro (Ichimura Masachika), who has been a father figure to her. With his talent for reaching an amicable settlement no matter how complicated a case may be, Yota is a complete contrast to Fuka. Although they are on opposing sides in court, he had fallen in love with her at first sight and is over-friendly while she treats him coldly. Shoji claims custody of his son (Tanaka Rei) and calls for a quick divorce. On the other hand, his wife Kyoko stubbornly insists that she will never divorce him. Thus, Fuka and Yota, who have become lawyers for a husband who is determined to divorce and a wife who will not divorce, end up fighting.
Official Website: www.ntv.co.jp/kitakaze-taiyo

This blog contains information and musings on current and upcoming Japanese dramas but is not intended to be comprehensive.
View all posts by jadefrost →
This entry was posted in NTV, Winter 2017 Drama Specials and tagged Haru, Ichimura Masachika, Kitakaze to Taiyo no Hotei, Okada Masaki. Bookmark the permalink.