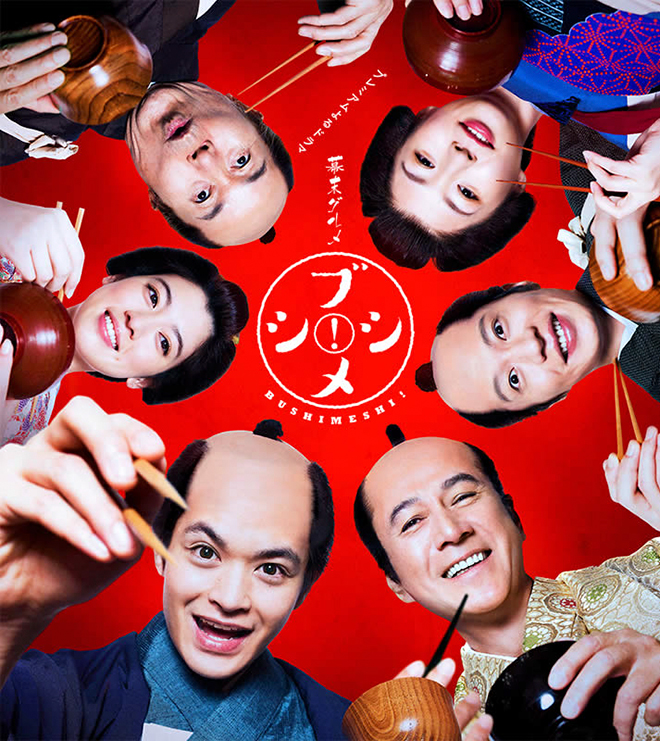 Story
Sakata Banshiro is a samurai of the Koya domain during the last days of the Tokugawa shogunate although he does not seem like one with his cowardly personality. He has come to live in Edo apart from his family as he takes turns on duty because of the alternate attendance system of the shogunate which requires his feudal lord Matsudaira Shigeteru to reside in the capital for several months each year. Banshiro despairs about being apart from his beloved wife Suzu who is a good cook and keeps crying every day when he thinks about her and their daughter Hana. Meanwhile, Banshiro encounters an unidentified footman and unwittingly makes him angry when he innocently speaks his mind. One day, a ruckus breaks out over the dried fishes that his opportunistic uncle Ujii Heizo had secretly presented to Shigeteru in the hopes of advancing his position. Banshiro ends up having to prepare Shigeteru’s meal to save the situation. However, he has never cooked at all. A notebook of cooking instructions that Suzu concealed in a box that she handed to him on the day of his departure saves him from this predicament. Then Banshiro finds out that the footman he met in the streets of Edo is actually the feudal lord of his domain. Shigeteru orders him to prepare a meal that will make his wife Chiyo, who has been in low spirits lately, feel better, in return for a pardon. Banshiro’s response is to attempt to flee Edo. But while doing so, he catches sight of Chiyo visiting a shrine. He eventually refers to Suzu’s notebook to make a meal for her.

Characters
Seto Koji as Sakata Banshiro
A clothes fitter of the fictitious Koya domain who has just arrived in Edo for his turn on duty. He does as he pleases and is a coward. He misses his wife Suzu a lot and cries night after night. Although he is a beginner, he becomes a samurai chef who treats people to food based on a recipe book handed to him from his wife who is back home.

Tanaka Kei as Yazawa Goroemon
Sakata Banshiro’s childhood friend and colleague since they were back home. An earnest young man who has a desire to improve himself and even willingly attends a private school after coming to Edo for his turn on duty. He respects the reformist lord of his domain, Matsudaira Shigeteru, who takes on new challenges.

Sakai Wakana as Okiku
The proprietress of the food caterer ‘Kawaharaya’. She does her best to manage the business in order to keep what her late husband left behind. Because of food-related incidents, she regards Sakata Banshiro who shows up before her in various ways, as her rival but … …

Miyoshi Ayaka as Sakata Suzu
Sakata Banshiro’s wife who is in their hometown. She constantly worries about him, especially overeating, and made him carry a wicker basket containing a book of cooking recipes before he left for Edo for his turn on duty. This book always saves her husband from predicaments.

Toda Keiko as Chiyo
The legal wife of the feudal lord of the Koya domain Matsudaira Shigeru. She has been feeling depressed lately but cannot speak the truth because she does not want to make him worry.

Hirata Mitsuru as Ujii Heizo
A clothes fitter and Sakata Banshiro’s uncle. He loves Banshiro like his own son, but also cunningly schemes to make use of Banshiro for his own advancement. However, this always does not go well.

Kusakari Masao as Matsudaira Shigeteru
The reformist feudal lord of the Koya domain. He is stricter in his command of the whole clan than the previous lord although he is an adopted child. There are people in the domain who resent him, but he goes his own way without any regard for them. In fact, he has a secret past-time that no one knows. He is the mysterious footman who occasionally wanders around the streets of Edo and encounters Sakata Banshiro at the chicken hotpot shop ‘Kijiya’.

This blog contains information and musings on current and upcoming Japanese dramas but is not intended to be comprehensive.
View all posts by jadefrost →
This entry was posted in NHK, Winter 2017 Dramas and tagged Bakumatsu Gurume Bushimeshi Series, Kusakari Masao, Seto Koji, Tanaka Kei, Toda Keiko. Bookmark the permalink.