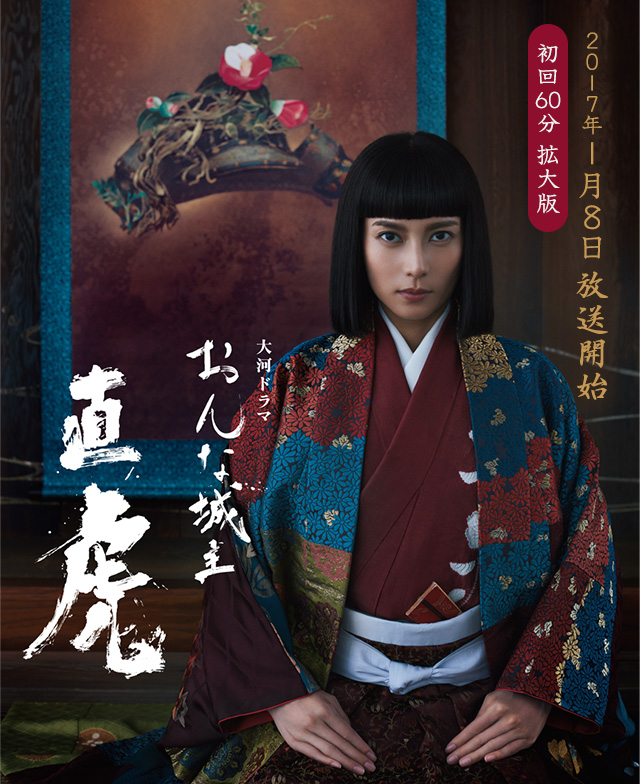 Story
During the Sengoku Period, a female lord of the castle succeeded as the head of the family by taking a male name, paving her own destiny and pitting herself against the turbulent times. She is Ii Naotora. When her father Ii Naomori, the head of the Ii clan of Totomi (present day western Shizuoka), was killed in war, he had no male successors but only one princess. Naomori had no sons with his wife Chika. His only daughter Otowa (later known as Ii Naotora) was betrothed to Kamenojo (later known as Ii Naochika), the eldest son of a branch of the clan and the intention was to make Kamenojo the next head of the family. However, the Ii clan was virtually under the control of the powerful Imagawa Yoshimoto and Kamenojo’s father Ii Naomitsu was suspected by Yoshimoto of plotting an uprising against the Imagawas and was killed. Kamenojo’s life was also targeted. He fled and went missing. It is rumoured that the chief retainer Ono Masanao landed the clan in this predicament because he told the Imagawas about Naomitsu’s plot. Masanao tries to betroth Otowa to his own son Tsurumaru, but she cannot marry anyone and ends up leaving home to keep a promise with Kamenojo. This is how she comes to live as a priest. At a time when the three major powers – the Imagawa clan of Suruga Province, Takeda clan of Kai Province and Tokugawa clan of Mikawa Province – were lying in wait for territory, Naotora’s true worth as the lord was called into question. The only things she could depend on in this place which had scarce resources and military might, were her own intellect and courage. However, the vassals could not hide their dismay. They did not think there was anything a female could do. Naotora joined hands with comrades to run the province, resolutely survived to protect the life of the young heir and laid the foundation for future development. Her motivating force was her single-minded love for her fiance whom she made a promise to in her childhood.

Characters
Shibasaki Kou as Otowa/Ii Naotora
The only daughter of Ii Naomori, the head of the Ii clan. Because Naomori had no other children, she was betrothed to Kamenojo, the eldest son of a branch family at a young age, and should have rallied the clan as the wife of its next head. However, the Ii clan was virtually under the control of the powerful Imagawa Yoshimoto and Kamenojo’s father was suspected of plotting against the Imagawas and ended up being killed. Nine-year-old Kamenojo fled to Shinano (present day Nagano Prefecture) because his life was also targeted and communication with him suddenly stopped. After that, although there were other marriage proposals, she refused them and entered priesthood. For some reason, she is given the male name of Jiro by the priest at the family’s temple.

Miura Haruma as Kamenojo/Ii Naochika
The eldest son of Ii Naomitsu. After his father was killed on suspicion of plotting an uprising against the Imagawas, his life was targeted and he was forced to flee. After that, 10 years pass without anyone knowing whether he is dead or alive.

Takahashi Issei as Tsurumaru/Ono Masatsugu
The eldest son of Ono Masanao, the chief retainer of the Ii clan. Otowa, Kamenojo and him were childhood friends, but he grew up conflicted about his father who alienated himself because he was on the side of the Imagawas. He succeeds his father and becomes the chief retainer but gets pushed into the same position as his father was in the past.

Sugimoto Tetta as Ii Naomori
Ii Naotora’s kind-hearted father. The head of the Ii clan. He struggled with leading the clan which was strongly divided in its response to the rule of the powerful Imagawas.

Zaizen Naomi as Chika
The younger sister of an Imagawa vassal, Niino Samanosuke. She married into the Ii clan as proof of the alliance with the Imagawas. She feels sorry for not bearing a son and is a dependable, stout-hearted wife and mother.

Kobayashi Kaoru as Nankei
Ii Naotora’s grand uncle. The chief priest of the family’s temple, Ryotanji, and the teacher of Jiro who entered priesthood. He may appear irresponsible, but he is actually the strategist of the Ii clan and later becomes the brains of the new lord of the castle.

Maeda Gin as Ii Naohira
Ii Naotora’s great-grandfather. The former head of the Ii clan who lives in retirement. After a fierce fight with the Imagawas, he conceded to them. He is still very hostile towards the Imagawas and aims to retaliate if there is an opportunity.

Fukikoshi Mitsuru as Ono Masanao
The chief retainer of the Ii clan. He is said to come from a distinguished family connected to Kyoto aristocracy and was valued for his brilliance. However, his policies which place great importance on the relationship with the Imagawas triggers a backlash against him.

Shunputei Shota as Imagawa Yoshimoto
The head of the Imagawa clan. A feudal lord of the Sengoku Period who forced the Ii clan into submission with his military might. He displayed unparalleled resourcefulness in managing territory and extended his influence from Suruga and Totomi to Mikawa and Owari. However, he was slain by Oda Nobunaga in the Battle of Okehazama.

This blog contains information and musings on current and upcoming Japanese dramas but is not intended to be comprehensive.
View all posts by jadefrost →
This entry was posted in NHK, Winter 2017 Dramas and tagged Kobayashi Kaoru, Miura Haruma, Onna Joshu Naotora, Shibasaki Kou, Takahashi Issei. Bookmark the permalink.