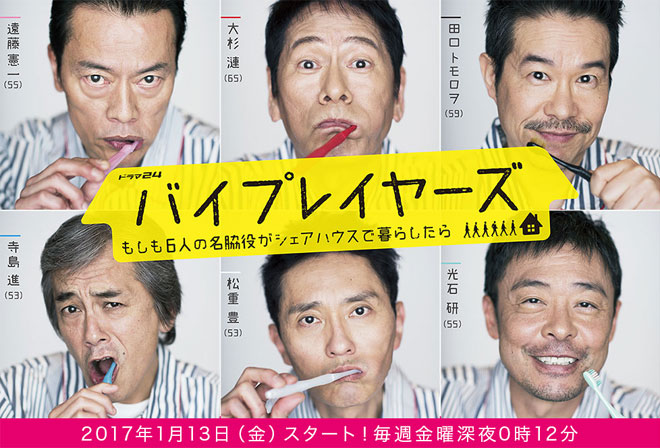 Story
Six outstanding middle-aged supporting actors Endo Kenichi, Osugi Ren, Taguchi Tomorow, Terajima Susumu, Matsushige Yutaka and Mitsuishi Ken receive offers from a Chinese video streaming website for a large-scale drama. An A-lister is playing the lead role and the director is also someone world famous. However, the director has a request. That is for all six supporting actors to live under the same roof for three months to prepare for their roles and to bring them closer. The circumstances are bewildering. They quarrel over trivial things and spend their days harmoniously like junior high school students after they start living together. But in truth, some project 10 years ago is the reason why they each have a lingering discomfort. Furthermore, there is a secret regarding this drama project … … Then, the supporting actors hear a rumour that the male lead has been dropped and this sets off ripples in the house they are sharing.

Characters
Endo Kenichi as Endo Kenichi
He stands out in roles as a villain for his sharp gaze and fierce look and has starred in many movies and dramas. Despite his appearance, he has a delicate, tender feelings and is prone to worrying. In fact, he surprisingly gets panic-stricken in both everyday life and in his work.

Osugi Ren as Osugi Ren
He is called the man with 300 faces for acting in a wide range of roles because he epitomises a supporting actor. At 65, he is the oldest among the members. This is why he is considered the leader among the six of them. He is amazingly kind. He is strongly opinionated but yields when accused.

Taguchi Tomorow as Taguchi Tomorow
He is active all round as an actor and a narrator, movie producer. He can be described as eccentric. He is a man of few words and often behaves in ways that other people cannot understand. No one is able to tell his personality. He loves figurines.

Terajima Susumu as Terajima Susumu
He has attracted attention as a regular in Kitano Takeshi’s movies. A jovial man who has the friendly personality of someone who grew up in a traditional working class neighbourhood, and a unique presence. He is manly, seems unrefined and aggressive, and gets lonely easily. He is impatient and will flare up immediately, but is actually the biggest coward.

Matsushige Yutaka as Matsushige Yutaka
An actor whose height and quiet air are distinct characteristics. He has played diverse roles from a villain to a good citizen. He is the most gentle-mannered, modest and kind of the six of them. He has steadily accumulated performances that the people around him desire, in his own way. When stress builds up, he will suddenly start grilling gyoza.

Mitsuishi Ken as Mitsuishi Ken
He made his debut in his first lead role at the age of 16. He is loved by everyone. He is appealing because of an understatedness and kindness acquired after a period of hardship, and an affable personality. An uncommon person who can get along with anyone regardless of age and gender. He is the most fashionable of the six of them.

This blog contains information and musings on current and upcoming Japanese dramas but is not intended to be comprehensive.
View all posts by jadefrost →
This entry was posted in Fuji TV, Winter 2017 Dramas and tagged Byplayers Series, Endo Kenichi, Matsushige Yutaka, Mitsuishi Ken, Osugi Ren, Taguchi Tomorow, Terajima Susumu. Bookmark the permalink.