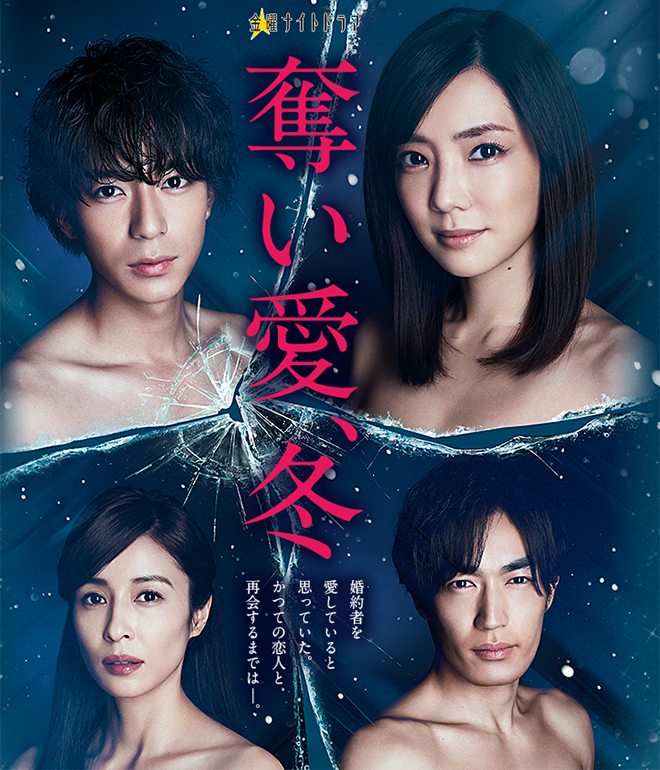 Story
Ikeuchi Hikaru works for a design company in Tokyo. One day, she gets a proposal from her assistant Okugawa Kota, who is also her boyfriend. He can be a little irresponsible, but he is very nice and loves her wholeheartedly above all else. Hikaru feels happiness. Meanwhile, Hikaru represents her company and takes part in a construction company’s logo design competition. At the orientation venue, Kota gives a very nervous Hikaru a kiss in the elevator for encouragement. However, the lift doors unexpectedly open at that moment. Hikaru’s gaze to slides to the door and she finds herself unable to take her eyes off someone standing outside the lift. He is Moriyama Shin, a designer of a rival company, whose former surname was Oda. He is the man whom Hikaru had once loved to death. But he vanished all of a sudden three years ago after telling her that he liked someone. Although Hikaru should be comforted by Kota’s presence, her memories of Shin come gushing forth. However, she has never had reason to tell Kota about this. And so, she is the only one agitated by her encounter with Shin. Furthermore, that day becomes the turning point and begins to cast a pall on her happy life. The feelings that Hikaru has tried to suppress are rekindled and her heart seeks him even though he is now married with a wife, Ran. As this happens, Kota’s love and jealousy deepens and he gradually turns into someone he hates.

Characters
Kurashina Kana as Ikeuchi Hikaru
She works for a design company. She has a strong sense of justice, is predictable and capable. Her family runs a small restaurant for set meals. Her father died of illness when she was a child and her mother raised her on her own. Her boyfriend Okugawa Kota works in the same company and is her age even though he is her junior. He has proposed to her and they are engaged to marry. She is strict with him at work, but is on cloud nine over their impending marriage. Then one day, she meets her ex-boyfriend who vanished all of a sudden even though she had loved him to death. Despite her struggle to suppress her feelings, her love for him is rekindled and she starts to seek him … …

Miura Shohei as Okugawa Kota
Ikeuchi Hikaru’s fiance. He works at the same design company. His mother dotes on him. He is indecisive but a soothing presence possibly because he was cosseted, growing up in a wealthy family. Then again, he displays a strong determination when it counts. Even the company that he is working for is one that he had found on his own after resigning from the company he got a job at through his mother’s connections to pursue his interest in design. He also stands firm in his engagement to Hikaru despite his mother’s violent opposition. However, Hikaru’s heart gets drawn towards her ex-boyfriend. As she becomes emotionally distant, his love and jealousy for her grows and he gradually turns into someone he hates.

Otani Ryohei as Moriyama (Oda) Shin
Ikeuchi Hikaru’s ex-boyfriend. He used to be Hikaru’s boss and also the man she considered marrying. However, he suddenly disappeared after telling her that their relationship is over because of some situation. He is now married to a childhood friend Moriyama Ran and works for a different design company. His capabilities are are highly regarded. He had worked in Fukuoka. But one day, he finds himself having to work in Tokyo for three months. This is how he meets Hikaru again like a prank of fate.

Akimoto Sayaka as Toyono Shuko
She works in the same design company as Ikeuchi Hikaru and Okugawa Kota. She has a cheerful personality, is well regarded within the company and also gets along well with Hikaru who is her senior. However, that is just for appearance sake. She actually like Kota and is scheming to wreck his relationship with Hikaru.

Darenogare Akemi as Onoue Reika
Okugawa Kota’s childhood friend. She is a family friend of the Okugawas and had dated Kota in university. His mother Misa wants her to marry him but … …

Sakakibara Ikue as Okugawa Misa
Okugawa Kota’s mother. A culinary expert. She is a wealthy woman whose husband has been successful in real estate. She dotes on her only son Kota. She is displeased that he has been dating Ikeuchi Hikaru without reporting anything to her in addition to his sudden declaration of his desire to get married. She maliciously harasses Hikaru in all sorts of ways.

Mizuno Miki as Moriyama Ran
Moriyama Shin’s wife. She has liked him since she was a child. Even now that he has become her husband, she loves him fiercely and accompanies him for his work in Tokyo. Meanwhile, she senses that Shin and Ikeuchi Hikaru are in contact again and she simmers with jealousy. She cannot move her right leg because of some incident in the past.

This blog contains information and musings on current and upcoming Japanese dramas but is not intended to be comprehensive.
View all posts by jadefrost →
This entry was posted in TV Asahi, Winter 2017 Dramas and tagged Kurashina Kana, Miura Shohei, Mizuno Miki, Otani Ryohei, Ubai Ai Series. Bookmark the permalink.