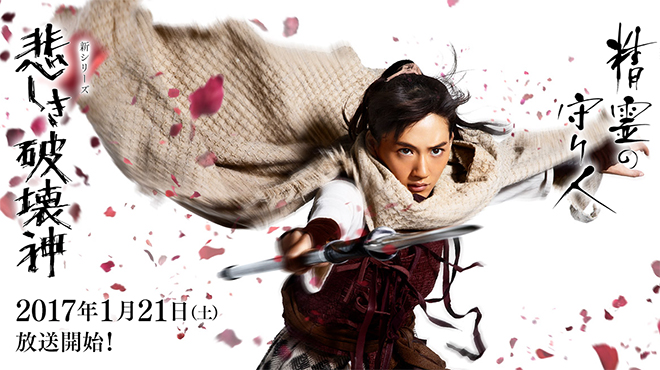 Story
Balsa successfully protected Chagum and the egg of the water spirit despite her failure to assassinate Rogusamu, the king of Kambal, who is the enemy of both her father and her foster father Jiguro. Four years after her journey with Chagum ended, Balsa has become a wanted fugitive because of her failed assassination attempt. Concealing herself in the Kingdom of Rota to the west of the New Yogo Empire, she continues to be a bodyguard. One day, Balsa saves a young girl Asla who is being sold into slavery by a human trafficking ring. The girl is the only survivor of a massacre that occurred several days ago. The Kingdom of Rota was founded after the people of Talu who believe in Taluhamaya, the god of devastation, were conquered and they have been persecuted since then. This god Taluhamaya dwells in Asla who is the perpetrator of the massacre. When she gets angry and summons the god, a dazzling light apepars and all that is usually left is the horrible sight of dead bodies around her. Balsa’s childhood friend Tanda warns her not to get involved because it is ominous. Meanwhile, the Kasharu, who are spies of the royal family, are mobilised in an attempt to eliminate Asla. Balsa teaches Asla that she must not kill people as deadly combat breaks out with Shihana and Sufahl, a daughter and father shaman pair from the Kingdom of Rota, who consider Asla a threat. Balsa’s struggle for survival begins once again. She goes all out to protect Asla just as she once did with the young Chagum. Meanwhile, in the New Yogo Empire, Chagum who is now officially the crown prince, has set out on a sea voyage. The great Talsh Empire in the south launches an invasion of the north including the New Yogo Empire, by waging war against the seafaring Kingdom of Sangal as a beachhead. Chagum leads reinforcements to the Kingdom of Sangal, but this is the emperor’s ploy to expel the crown prince. Sangal has already fallen into the hands of the Talsh Empire and Chagum ends up becoming a captive. What will become of the fates of both Balsa and Chagum?

Characters
Ayase Haruka as Balsa
A subject of the Kingdom of Kambal. When she was 6 years old, her father got entangled in the royal family’s intrigue, and his close friend Jiguro brought her out of their homeland. She was drilled in the short spear as a weapon by Jiguro and makes a living as a bodyguard. She becomes the bodyguard of Prince Chagum of the New Yogo Empire. As they continue their journey, she protects him from the Emperor and evil spirits, and establishes a deep relationship of trust with him. Four years later, she has become a wanted fugitive pursued by the New Yogo Empire and has been hiding herself in the Kingdom of Rota. That is where she meets Asla, a young girl with unusual power. Her journey with Asla reminds her of the days she spent with Chagum.

Itagaki Mizuki as Chagum
The crown prince of the New Yogo Empire. Four years ago, his father the Emperor was after his life because of the egg of the water spirit dwelling in him. He escaped with Balsa and set off on a journey. In doing so, he gained the ability to see the world of spirits and feel unusual phenomenon that ordinary people do not understand. This causes him to be alienated even more by the Emperor. The Kingdom of Sangal’s request for reinforcements is a good excuse for him to lead warships and set sail for the seafaring nation.

Emoto Akira as Sufahl
The head of the Kasharu and father of Shihana. His role is to monitor the Talu tribe and he tries to kill off Asla who possesses unusual power. He learns that his daughter is trying to make use of Alsa and he vacillates between his mission as Kasharu and relationship with his daughter.

Suzuki Rio as Alsa
A young girl who belongs to the oppressed Talu tribe in the Kingdom of Rota. When she feels fear or great anger, she summons the Taluhamaya, the god of devastation, which levels her surroundings to the ground and massacres people. A struggle breaks out between the people who fear her power and the people who revere her and Balsa becomes her bodyguard.

Dean Fujioka as Ihan
The younger brother of King Yosam of the Kingdom of Rota. When he was young, he fell in love with Asla’s mother Torishia and consider freeing the Talu tribe. However, this thinking triggers protests from the rulers in the south.

Hashimoto Satoshi as Yosam
The king of the Kingdom of Rota. He brought together the country which constantly has infighting. Aware that his time is drawing near, he entrusts the future of the kingdom to his younger brother Ihan.

Dan Mitsu as Torishia
A member of the Talu tribe and Asla’s mother. She knows about her daughter’s unusual power. She is put to death for violating a prohibition and trespassing into a sacred sanctuary.

Kora Kengo as Raul
The second prince of the Talsh Empire. He uses his keen, rational mind to invade other countries. He has many subordinates such as Hugo who come from vassal states because he appoints outstanding people to important positions regardless of their ethnicity. His ambition is now directed at the north where the New Yogo Empire is located.

Koichi Mantaro as Cruise
The Prime Minister of the Talsh Empire and confidant of the second prince Raul. He works out a clever scheme to invade the north as Raul’s strategist.

Higashide Masahiro as Tanda
A herbalist of the New Yogo Empire and descendant of the indigenous Yaku people. Balsa’s childhood friend. He has been training under the shaman Torogai since young and spending his lifetime searching for Nayugu, another world which is invisible to the eye. He is concerned for the welfare of Balsa who has become a wanted fugitive but meets her again four years later in Tsuram in the Kingdom of Rota. He feels something sinister dwelling in Asla and tries to stop Balsa from saving Asla and her older brother Chikisa, but … …

This blog contains information and musings on current and upcoming Japanese dramas but is not intended to be comprehensive.
View all posts by jadefrost →
This entry was posted in NHK, Winter 2017 Dramas and tagged Ayase Haruka, Dean Fujioka, Emoto Akira, Kora Kengo, Maki Yoko, Seirei no Moribito Series, Suzuki Rio, Suzuki Ryohei. Bookmark the permalink.