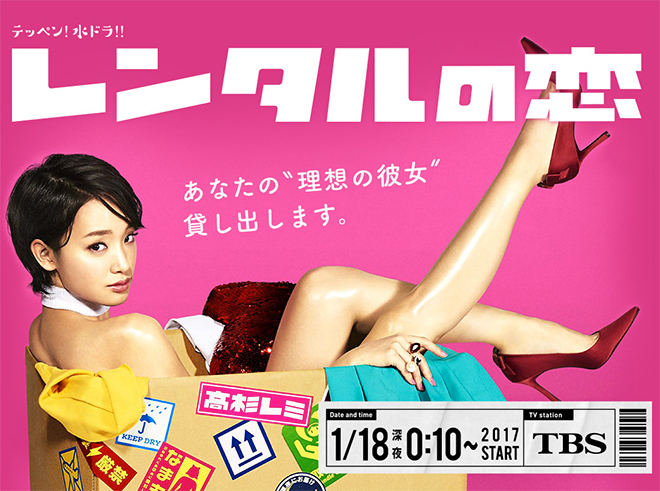 Story
Takasugi Remi is the most popular “rental girlfriend” of Rental Lovers, a company which provides a girlfriend rental service. She never rejects or throws out a customer no matter how unreasonable the demand, and instead perfectly executes requests and guarantees satisfaction as long as it is within company rules and hours. Although she understands customers’ preferences and completely becomes the ideal girlfriend in attitude, speech and even character. But there is something about her that is different from people. Once her date (work) ends, she never smiles. Moreover, there is a strange bandage around her neck. Who exactly is she? On a day approaching Christmas, Remi gets rented by a university student Yamada Kosuke, who has never had a girlfriend, and steps out of a cardboard box that is delivered to him. Remi has thoroughly researched Kosuke’s taste and even wears a costume of an anime character that he likes on the date. Kosuke instantly falls for Remi. However, he soon finds out that Remi is a mysterious girl who wears a bandage on her neck and never smiles when she is off-duty. Kosuke expresses his wish to rent her forever but is told that it is impossible. Then the story of Kosuke, Remi, Sumire who is Kosuke’s childhood friend -, and his best friend – Hayato goes to an unexpected direction.

Characters
Goriki Ayame as Takasugi Remi
The most popular “rental girlfriend” of Rental Lovers. She understands customers’ preferences and completely becomes the ideal girlfriend in attitude, speech and even character. However, she never smiles once work is over. And she has a strange bandage around her neck.

Taiga as Yamada Kosuke
An ordinary, plain third-year university student. His greatest happiness is reading his favourite anime in his apartment. He is hunting for a job but he has nothing that he particularly dreams of doing and is half-hearted. One day, he happens to learn about the rental girlfriend service. After he orders Takasugi Remi, he experiences a dream date and ends up falling in love with her.

Kishii Yukino as Michibata Sumire
Yamada Kosuke’s childhood friend who attends the same university as him. In fact, she likes him but has never been able to tell him about her feelings and he only regards her as a nuisance. Even so, she
cannot leave him alone and stay silent when she sees him fall in love with Takasugi Remi and get pushed around by her. And then, she realises a secret of Remi’s … …

Kentaro as Tachibana Hayato
Yamada Kosuke’s acquaintance since junior high school. He attends the same university. His family is famous and wealthy. Because it has been decided that he will take over the family business in the future, he does not have to work part-time or find a job and leads a carefree university life. He appears to be frivolous, but is a friendly, good guy at heart. He half worries about Kosuke who is crazy about Takasugi Remi, but is also curious and expresses understanding. He is madly in love with his girlfriend Miki.

Hara Mikie as Yu
She works at Rental Lovers like Takasugi Remi and is the second most popular “rental girlfriend”. She looks young despite her age and uses her sexy, sultry body as her weapon. She has many wealthy and celebrity customers. Her great pride gets in the way of her becoming no. 1, but she just regards Remi as her rival and is hostile. She is actually married and has children?

Nukumizu Yoichi as Takami Kenbutsu
The company president and manager of Rental Lovers. He appears like Charlie Chaplin in his old business suits and big, battered shoes. He is humble, always smiles and always in a hurry because he is conscious of time. His true identity is shrouded in mystery.

This blog contains information and musings on current and upcoming Japanese dramas but is not intended to be comprehensive.
View all posts by jadefrost →
This entry was posted in TBS/MBS, Winter 2017 Dramas and tagged Goriki Ayame, Rental no Koi. Bookmark the permalink.