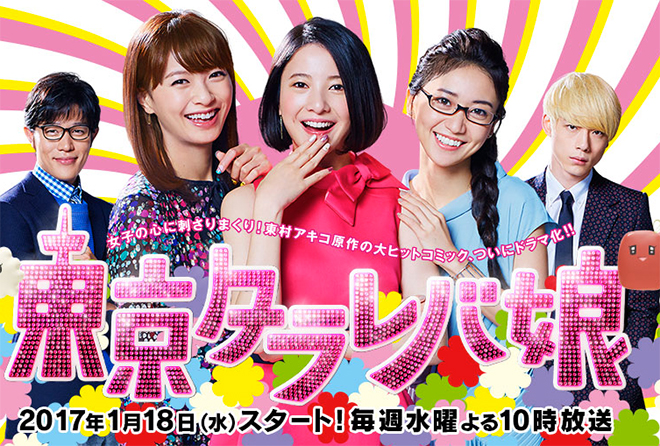 Story
30-year-old Kamata Rinko is a single, struggling scriptwriter with no boyfriend. Her favourite pastime is the daily girls’ night out with her good friends since high school days, Yamakawa Kaori and Torii Koyuki, where they talk about whatever they please as they drink. One day, Rinko is invited to a meal by Hayasaka Tetsuro, the producer of a drama production company, who says he has something important to tell her. Eight years ago, Hayasaka confessed his feelings to Rinko when he was still an uncool assistant director and she rejected him. But he is an impressive producer now. Kaori and Koyuki suggest that he may propose to her this time. Rinko herself is not altogether displeased with the idea. They talk animatedly and endlessly about hypothetical situations. “If I become beautiful, a better guy will come along!” “If I fall in love with the guy, we can get married!” Then a younger, handsome, golden-haired guy named Key shows up in front of them all of a sudden and bluntly calls them “what if” women. The trio have to face the harsh reality that they are no longer girls. Rinko enters her 30s while still immature, seeking happiness and struggling with romance and work.

Characters
Yoshitaka Yuriko as Kamata Rinko
A struggling scriptwriter. After graduating from university, she was an assistant director at the programme production company, Japan TV Enterprise. But she switched careers with the intention of becoming a scriptwriter. Three years ago, she finally made her debut in a mini drama online. Despite her great motivation, she has not been able to write dramas and movies. She enjoys girls’ night outs with her good friends Yamakawa Kaori and Torii Koyuki, and romance has been a distant memory for a number of years.

Eikura Nana as Yamakawa Kaori
Kamata Rinko’s good friend since high school. She has opened a small nail salon in Omotesando. Free-spirited and pure, she is called “forever 16” by Rinko and Torii Koyuki. Although she dreams of getting married to a handsome wealthy guy, she has not had a boyfriend in a while.

Oshima Yuko as Torii Koyuki
Kamata Rinko’s good friend since high school. She manages the pub ‘Nonbee’ with her father Yasuo. This is where Rinko, Yamakawa Kaori and herself have their girls’ night out. She has a candid personality. Although she is good at cooking, she has never made a meal for her boyfriend because none of the long relationships have lasted long.

Sakaguchi Kentaro as Key
An up-and-coming model. He gives Kamata Rinko and her friends who keep talking about hypothetical situations at ‘Nonbee’, the nickname “what if” women. Even after that, he and the three of them remain linked by destiny and he becomes a regular customer of ‘Nonbee’ before realising it. He hides a secret beneath his cool appearance.

Hiraoka Yuta as Samejima Ryo
The guitarist of the popular band, Bumkeys. When he dated Yamakawa Kaori almost 10 years ago, luck was not on his side. But after the one hit song, he finally made his debut last year and suddenly became the member of a popular band. One day, he is reunited with Kaori again … …

Tanaka Kei as Marui Yoshio
A simple-minded, affable salaryman who comes to ‘Nonbee’ unexpectedly and gets drawn to the food that Torii Koyuki makes.

Suzuki Ryohei as Hayasaka Tetsuro
A drama producer. He has a kind personality. Eight years ago, he confessed his feelings to Kamata Rinko. At that time, she was an assistant director and his junior at Japan TV Enterprise. He is supportive of Rinko who has still not had a breakthrough.

This blog contains information and musings on current and upcoming Japanese dramas but is not intended to be comprehensive.
View all posts by jadefrost →
This entry was posted in NTV, Winter 2017 Dramas and tagged Eikura Nana, Suzuki Ryohei, Tokyo Tarareba Musume Series, Yoshitaka Yuriko. Bookmark the permalink.