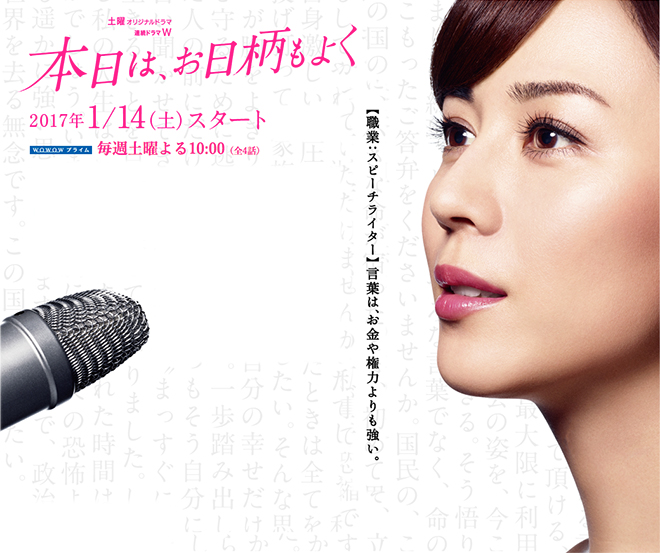 Story
Office lady Ninomiya Kotoha works for the General Affairs Department of Totaka, an established confectionery company. One day, she is suddenly ordered to transfer to the PR Department which baffles her. Then, her childhood friend Imagawa Atsushi, whom she has been secretly in love with, tells her that he is getting married and she feels depressed. A heartbroken Kotoha attends Atsushi’s wedding reception in the foulest of moods. However, she hears an amazing speech that mesmerises her at the reception. It is the congratulatory address of the legendary speechwriter Kuon Kumi. Meanwhile, Kotoha is selected to be a member of a huge company project and tasked with writing her company president’s speech. However, she is bested by the copywriter Wada Kamatari who is also on the team. A determined Kotoha barges into Kumi’s office. She gets a job as Kumi’s apprentice and resigns from her company, taking a new step as a speechwriter. One day, an influential politician Oyamada Jiro, who heads the Minshuto, comes to Kumi’s office. Then Atsushi is asked by Oyamada to run in the House of Representatives election in the same constituency as his late father Atsuro and feels bewildered. Meanwhile, Wada is asked to support the campaign of Shintento’s Diet member Kurokawa. He gets wind of Atsushi’s situation and tries to recruit Kotoha. Atsushi soon decides to run in the election and Kotoha is unexpectedly designated as his speechwriter. Will her words be able to move the world?

Characters
Higa Manami as Ninomiya Kotoha
An ordinary office lady who is the sort who goes straight for something once she sets her heart on it. However, she has no self-confidence. She meets the speechwriter Kuon Kumi and that starts to change her life.

Hasegawa Kyoko as Kuon Kumi
A legendary speechwriter who supports the speeches of politicians from behind the scenes. She becomes Ninomiya Kotoha’s teacher.

Watanabe Dai as Imagawa Atsushi
Ninomiya Kotoha’s childhood friend who understands her very well. An employee of an advertising agency. He has a strong sense of justice and an upright character. His parents died young.

Ishibashi Renji as Oyamada Jiro
The head of the Minshuto whom Imagawa Atsushi’s father Atsuro used to support as secretary-general. He trusts Kuon Kumi.

Hayami Mokomichi as Wada Kamatari
A copywriter of an advertising agency. He is active in the advertising world. He has absolute self-confidence and is a formidable strategist.

Funakoshi Eiichiro as Imagawa Atsuro
Imagawa Atsushi’s father. He had fought against the Shintento with the people’s happiness above all else but died without fulfilling his goal.

This blog contains information and musings on current and upcoming Japanese dramas but is not intended to be comprehensive.
View all posts by jadefrost →
This entry was posted in Winter 2017 Dramas, WOWOW and tagged Funakoshi Eiichiro, Hasegawa Kyoko, Hayami Mokomichi, Higa Manami, Honjitsu wa Ohigara mo Yoku. Bookmark the permalink.