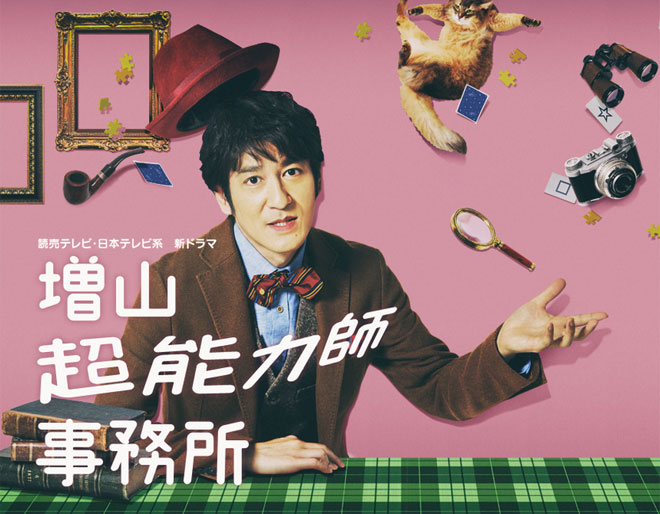 Story
When people with supernatural powers pass the Japan ESP Association’s certification test, they are called grade one and grade two ESPers while those who fail are called incompetent. Masuyama Keitaro, a grade one ESPer, works for the research company of the Association’s director Takanabe Itsuo. He is in charge of investigating and discovering new ESPers. However, he defies Takanabe’s instructions to rush the investigations of “dangerous” ESPers related to cases and goes with his colleague Kawarasaki Akira to scout eccentric “untrained” ESPers. They are high school students Nakai Ken who can hear people’s thoughts and Takahara Atsushi who knows everything just by touching a person’s little finger. But the young men reject him. Masuyama understands their feelings because he had the same worries in the past. His intention is to give ESPers a place to work and he sets up Masuyama Supernatural Powers Office in Nippori, Tokyo. Led by Masuyama, the members help clients to solve troubles such as extramarital affairs and searching for people. But they are certainly not perfect supermen and women. Because they possess abilities that are just a little different, they were bullied, insulted and viewed with curiosity at a young age. However, it is precisely because they have felt how hard it is to survive, that they are able to empathise with people’s worries and suffering. There are members who cannot control their superpowers well and there are times when this gets awkward and irritating. However, they try hard to help people.

Characters
Tanaka Naoki as Masuyama Keitaro
The head of Masuyama Supernatural Powers Office. Although his favourite phrase is “It’s a hassle”, he is an ESPer with high ability and very popular with females. He has a wife Fumino and five-year-old daughter. Circumstances make it necessary for him to risk him life to protect his wife.

Nakamura Yuri as Sumiyoshi Etsuko
A grade two ESPer who belongs to Masuyama Supernatural Powers Office. In addition to being able to read people’s minds, she can set things on fire without touching them. Gifted with both beauty and intelligence, she is a notorious former leader of a group of delinquents. She is actually in love with Masuyama Keitaro.

Emoto Tokio as Nakai Ken
A grade two ESPer who belongs to Masuyama Supernatural Powers Office. Besides being able to capture his and other people’s impressions on camera, he can also perceive people’s feelings as colours. A misanthrope who likes two dimensions. He is an expert at locating cats and dogs.

Hirata Atsuko as Oyatsu Tomoe
A middle-aged lady who is in charge of accounting at Masuyama Supernatural Powers Office. Although she does not have supernatural powers, she has keen insight that comes with the wisdom of age. She believes in being able to see through a person’s true nature rather than relying on supernatural powers.

Kaga Takeshi as Takanabe Itsuo
The director of the Japan ESP Association and the head of the mysterious company, Takanabe Research.

This blog contains information and musings on current and upcoming Japanese dramas but is not intended to be comprehensive.
View all posts by jadefrost →
This entry was posted in NTV, Winter 2017 Dramas and tagged Masuyama Chounouryokushi Jimusho. Bookmark the permalink.