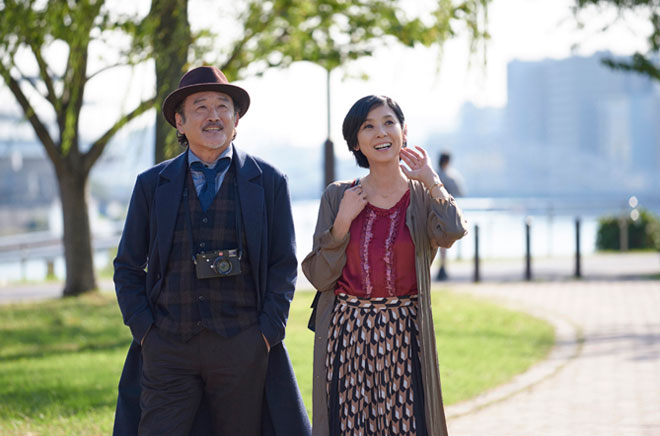 Date: From 11.30 p.m., 3 January 2017
Scriptwriter: Matsumoto Tetsuya
Cast: Yoshida Kotaro, Takahata Mitsuki, Katagiri Jin, Fukushi Seiji, Suzuki Anne (guest star), Oguri Shun, Kuroki Hitomi
Synopsis: 56-year-old Kururi Takuzo (Yoshida Kotaro) is the third-generation owner of a traditional Japanese confectionery shop ‘Kururiya’ in Kototoibashi, Tokyo. He received a strict education from his father, who was a man with an old-fashioned way of thinking, and his skills in making the shop’s signature dango have surpassed his father’s. But in his personal life, he is thrice-divorced and cannot help himself when it comes to women. His hobby is to go for walks in town with the antique single-lens reflex camera that his father bought for him when he was a child, and capture the scenery of the good old-fashioned Tokyo which will change someday. One day, a young man visits ‘Kururiya’ while they are in the middle of preparations. His name is Takakura Masahiro (Fukushi Seiji) and he is the son of Takuzo and his first wife. The atmosphere between father and son is awkward due to the suddenness of this visit. It has been a while since they last met. Disregarding the presence of a shocked Sudo Akane, the shop’s part-time employee, Masahiro tells his father that he would like him to meet with the girl that he is going to marry soon. Several days later, Takuzo goes to the venue despite whining about it. Masahiro’s fiancee Ebihara Rumi (Suzuki Anne) is cheerful and sensible, and makes a very good impression. Even after they introduce themselves and make general conversation, Rumi’s aunt Fujiwara Minako (Kuroki Hitomi) does not show up. So they have no choice but to proceed with the meal as they wait for her. Just when they feel that they have reached their limit, she finally appears. In that moment, Takuzo inwardly notes that she has dispelled his notion of an aunt. However, as the meal progresses, a disquieting air starts to settle over the table. Minako flares up at what Takuzo talks about and a heated exchange ensues between the two of them. This develops into a quarrel even though this is their first meeting. It is the worst encounter. But fate will not let them go.
Official Website: www.tv-tokyo.co.jp/tokyo_sentimental