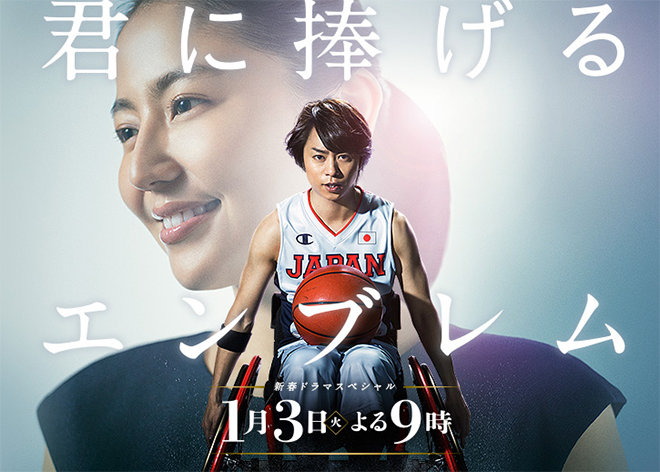 Date: From 9.00 p.m., 3 January 2017
Original Work: Based on true story of Kyoya Kazuyuki
Scriptwriter: Adachi Naoko (Furenaba Ochin, Underwear, Shitsuren Chocolatier)
Cast: Sakurai Sho, Nagasawa Masami, Ichihara Hayato, Tanaka Tetsushi, Kobayashi Kaoru, Baisho Mitsuko, Katase Rino, Ando Masanobu, Kagawa Teruyuki
Synopsis: Takajo Kazuya (Sakurai Sho) has been a gifted, high-profile soccer player since childhood. He joined the J League and was chosen for the national team at the age of 23 in a dream come true. He is also setting up a family with his fiancee Nakagawa Miki (Nagasawa Masami). Life has been going well for him. But on the day of the dress rehearsal for his wedding, he meets with an accident and suffers a spinal cord injury. This causes him to lose the function of his two legs, leaving him unable to stand or walk. He would have to spend the rest of his life in a wheelchair. This is a cruel reality for Kazuya who is forced to stop thinking that he can survive anywhere as long as he has his legs. It is tantamount to losing his very own life. While he is in the depths of despair, Miki registers their marriage. With her steadfast support, Kazuya conquers his rehabilitation in astounding speed. However, both Miki and his families are opposed to their marriage, the public regards him with pity and worst of all, he is forced to accept that he is now impaired. Unable to find something to take the place of soccer, he can only feel helpless and frustrated with a life of uncertainty. Then one day, Kazuya happens to see a game of wheelchair basketball at the rehabilitation centre’s gym. The intense game, smell of burnt tyres from friction with the floor, wheelchairs like combat vehicles, brawny men going head-on and that excitement … … draws him in. Someone hands a ball to Kazuya and asks if he would like to give it a try. He becomes a wheelchair basketball player through sheer hard work, help from the people around him and Miki’s support. Kazuya’s speed and momentum cannot compare to the other players because of the severity of his disability. However, he wants to be a man whom his wife and their children who come into this world can be proud of, and also to live a life he can be proud of. So he starts to take on the challenge of qualifying to represent Japan for the Paralympics by drawing on his experience as a midfielder during his days as a soccer player.
Official Website: www.fujitv.co.jp/kimien