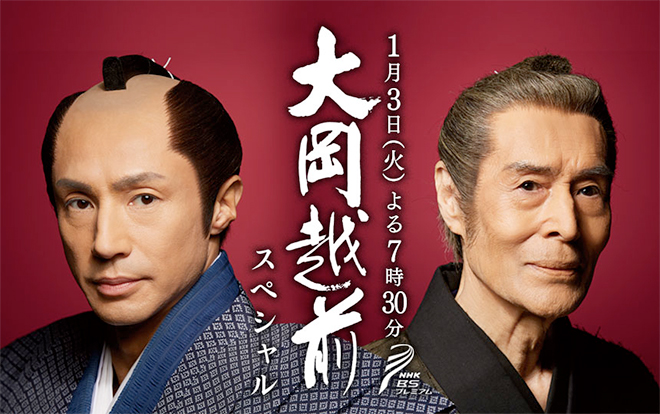 Date: From 7.30 p.m., 3 January 2017
Scriptwriter: Onishi Nobuyuki (Ooka Echizen Series)
Cast: Higashiyama Noriyuki, Katsumura Masanobu, Mimura, Terajima Susumu, Emoto Tokio, Ishii Masanori, Kanayama Kazuhiko, Yamazaki Yuta, Kato Rai, Kato Go, Hoshi Yuriko, Yashima Norito, Konno Mahiru, Ishibashi Renji, Takahashi Choei, Terada Minori, Matsubara Chieko, Hira Takehiro, Tsugawa Masahiko
Synopsis: The case starts with the discovery of a brutally murdered man under an embankment on a dry winter’s day. Among the onlookers is an elderly samurai Kazama Gorozaemon (Kato Go) who gazes at the corpse with a piercing stare. The dead man is identified as the accountant Takahata Rokusuke (Tsuda Kanji). He worked for the Ueharas of Ganganosawa in Dewa Province, prompting speculation that the killer is Amemiya Jisaburo (Yashima Norito) who was expelled from the same household recently. In fact, Jisaburo has been pursuing Gorozaemon, a former samurai of the Uehara clan and his father’s enemy, for a long time. 23 years ago, Gorozaemon was discovered by Jisaburo’s father after he had just slipped into the mansion in order to gather proof related to the chief retainer’s life and the misappropriation of the family’s money by the Edo-based deputy, and had to kill him out of necessity. Edo magistrate Ooka Tadasuke (Higashiyama Noriyuki) feels the complexity of the family’s situation which dates back 23 years ago in this present case. Then one day, Gorozaemon shows up all of a sudden and claims that he was the one who killed Rokusuke with his sword. What is the truth of the murder and how will Ooka try this case?
Official Website: www4.nhk.or.jp/P4242

This blog contains information and musings on current and upcoming Japanese dramas but is not intended to be comprehensive.
View all posts by jadefrost →
This entry was posted in NHK, Winter 2017 Drama Specials and tagged Emoto Tokio, Higashiyama Noriyuki, Hira Takehiro, Katsumura Masanobu, Mimura, Ooka Echizen Series, Terajima Susumu. Bookmark the permalink.