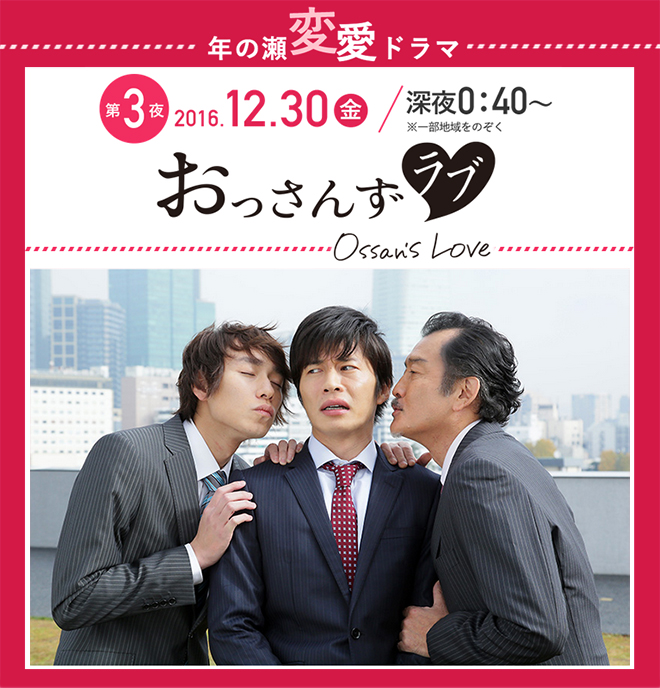 Date: From 12.20 a.m., 31 December 2016
Scriptwriter: Tokuo Koji (Keishichou Nasi Goreng-ka, Konkatsu Deka, DoS Keiji)
Cast: Tanaka Kei, Yoshida Kotaro, Ochiai Motoki, Miyazawa Sae
Synopsis: 33-year-old Haruta Soichi (Tanaka Kei) works for the product development department of a company that sells novelty goods. He is a bachelor who wants to get married but is not in the least popular. One day, he sees something that he should not. It is a large collection of photos of himself. These were taken secretly with the smartphone of his very masculine boss Kurosawa Musashi (Yoshida Kotaro) whom he respects. This scares Haruta. Then Kurosawa intercepts a nervous Haruta in the toilet. Slamming his hand into the wall in front of him, Kurosawa confesses his love unexpectedly!! Haruta gets frightened and consults a junior in the design department, Hasegawa Yukiya (Ochiai Motoki), who has been his roommate for one year. However, Haruta unwittingly puts himself in a greater dilemma with his own actions. Despite the female attention that the handsome Hasegawa gets at work, he actually has his feelings for Haruta although he had hidden it and settled for living together with him. Feeling threatened by Kurosawa’s confession, he suddenly slams his hand into the wall in front of Haruta in the bathroom. He knows Haruta likes females with big breasts and asks what he thinks of large penis. Haruta is disgusted and in complete panic by this time. He asks a department colleague Minato Asuka (Miyazawa Sae) whom he fancies, for help and tries to evade the love of the two men. From a common sense point of view, it seems impossible but if Haruta can overcome this gender obstacle, he maybe happy living with the two men?
Official Website: www.tv-asahi.co.jp/henai

This blog contains information and musings on current and upcoming Japanese dramas but is not intended to be comprehensive.
View all posts by jadefrost →
This entry was posted in TV Asahi, Winter 2017 Drama Specials and tagged Ossans' Love Series, Tanaka Kei, Yoshida Kotaro. Bookmark the permalink.