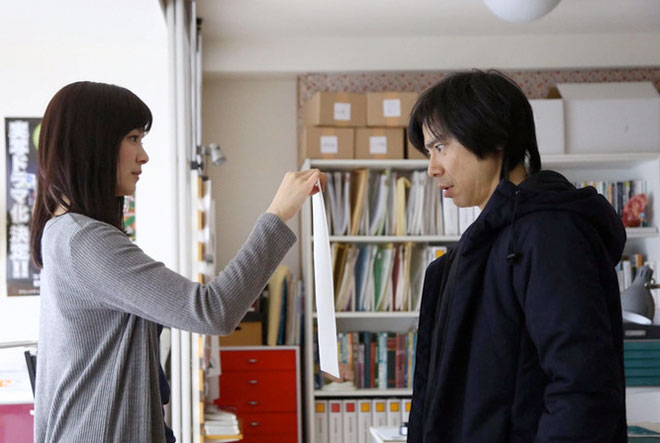 Date: From 1.00 a.m., 26 December 2016
Scriptwriter: Kojima Soichiro
Cast: Miyamoto Koji, Ishibashi Anna, Usuta Kyosuke, Sato Jiro, Koide Keisuke
Synopsis: 46-year-old Nishi Kotaro (Miyamoto Koji) is a struggling manga artist. He once made a lot of royalties from hit works, but went into slump after that and has lived in obscurity for the last 10 years. He has also nearly used up the royalties but has no work. One day, Nishi is asked by his editor Uchimura Kiyotaka (Koide Keisuke) to be the assistant of a popular, pretty young manga artist Gunji Sumire (Ishibashi Anna) who is more than 20 years his junior. Nishi is less than eager. However, he reluctantly accepts the role for the sake of money. He starts to draw manga for the first time in a long while and is soundly criticised by Sumire for being way behind the times and for his bad illustrations. However, he is forced to admit that Sumire’s ability is impressive. Despite being subject to terrible criticism, Nishi carries out his role as her assistant. As he comes in contact with manga and sees Sumire work hard on them, he begins to regain motivation but … …
Official Website: www.fujitv.co.jp/orenosensei

This blog contains information and musings on current and upcoming Japanese dramas but is not intended to be comprehensive.
View all posts by jadefrost →
This entry was posted in Fuji TV, Winter 2017 Drama Specials and tagged Koide Keisuke, Ore no Sensei. Bookmark the permalink.