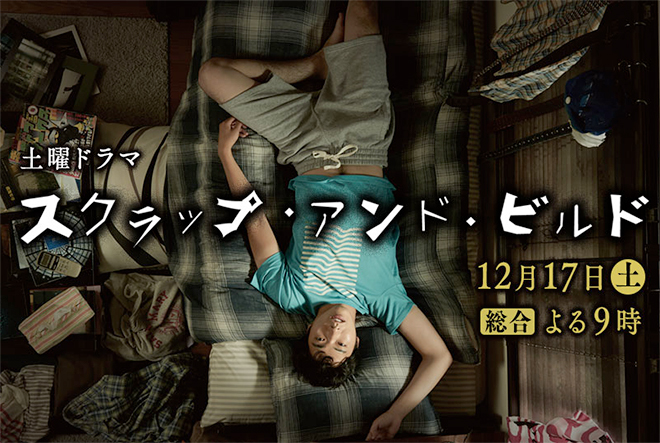 Date: From 9.00 p.m., 17 December 2016
Original Work: Scrap and Build by Hada Keisuke
Scriptwriter: Kosaka Takafumi (Hi no Ko, Mutsuu, Themis no Kyuukei)
Cast: Emoto Tasuku, Yamashita Rio, Asaka Kodai, Akimoto Sayaka, Asaji Yoko, Yamaya Hatsuo
Synopsis: 28-year-old Kento (Emoto Tasuku) is unemployed. He had quit his job after growing weary of the company he was working at. Although he is studying to become a paralegal while he looks for a job, he keeps failing companies’ mid-career recruitment exams and idly spends his days to the point of frustration. Kento lives with his mother (Asaji Yoko) and 87-year-old grandfather (Yamaya Hatsuo), who needs nursing care. His grandfather has not had a major illness and is healthy considering his age even though he cannot move his body as he wishes. He keeps complaining that he is better off dead. Kento is fed up with his grandfather. But on one occasion, he suddenly has a thought. He has been ignoring his grandfather’s cries all this while. It is no wonder that his grandfather wants to die if he is just lying in bed waiting for death to eventually come. Kento feels that his treatment of his grandfather up to this point seems self-centred and gloomily talks to a friend Daisuke (Asaka Kodai), who works in nursing care. He is advised that taking every possible care of the person receiving care is the most effective method. When he does not understand what that means, Daisuke tells him that a person’s muscles and even mind will instantly deteriorate if he receives excessive care and can no longer be mobile. Kento comes to the strange decision to cut back on the nursing care to the extent possible so that his grandfather can have the peaceful, dignified death that he desires. He starts to wage a queer battle, clearing up the house and making it extremely barrier free in order to take away his grandfather’s muscle strength and resistance. However, as the mystery hidden by his grandfather gradually grows bigger, the situation begins to take an unexpected twist.
Official Website: www.nhk.or.jp/dodra/scrapandbuild

This blog contains information and musings on current and upcoming Japanese dramas but is not intended to be comprehensive.
View all posts by jadefrost →
This entry was posted in NHK, Winter 2017 Dramas and tagged Emoto Tasuku, Scrap and Build. Bookmark the permalink.