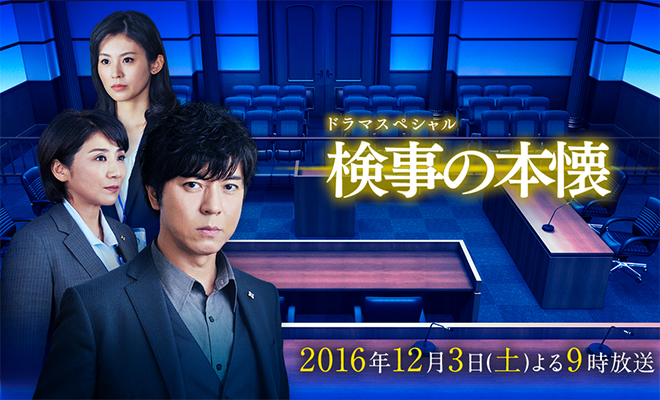 Date: From 9.00 p.m., 3 December 2016
Original Work: Kenji no Honkai by Yuzuki Yuko
Scriptwriter: Sakai Masaaki (Aogeba Toutoshi, Yakubyougami Series, Smoking Gun)
Cast: Kamikawa Takaya, Matsushita Yuki, Motokariya Yuika, Izumi Soji, Yamaguchi Makiya, Yajima Kenichi, Mano Erina, Masana Bokuzo, Tezuka Toru, Musaka Naomasa, Kuroda Fukumi, Terada Minori, Nakahara Takeo, Ibu Masato
Synopsis: Prosecutor Sakata Sadato (Kamikawa Takaya) of the Yonesaki District Public Prosecutors Office and his colleague Shoji Mao (Matsushita Yuki) are pulled into assisting the Tokyo District Public Prosecutors Office’s Special Investigation Department. They are investigating influential Diet lawmaker Okouchi Sadakazu (Terada Minori) and Masumoto Keisei (Musaka Naomasa), the representative director of a technical skills foundation. The two men are involved in a bribery case. But a key witness in this scandal, Sonobe Katsuya (Inada Tatsuo), the foundation’s director of accounts, commits suicide. The investigation lead is dashed and the top brass grows impatient. But the assistance that Sakata and Mao have actually been providing since coming to Tokyo is trivial work while the special investigators conduct important investigations such as interrogating witnesses. Sakata is even coolly warned by Kato Shiori (Motokariya Yuika), the administrative officer who is his partner, to forget the ways of the countryside. Meanwhile, the next person believed to hold the key to the case, Kuzumaki Toshiyuki (Tezuka Toru), the foundation’s accountant, has disappeared. Sakata analyses a memo left by Kuzumaki and goes to his place together with Shiori but ends up losing sight of Kuzumaki. After that, Sakata is ordered by the Special Investigation Department’s chief prosecutor Waizumi Takuya (Masana Bokuzo) to question Kuzumaki’s cousin Iwadate Keiji (Haruta Junichi). He is instructed to leave out the whereabouts of Kuzumaki who is on the run, but Iwadate has been wanting to go to the hospital to see his mother who does not have long to live. Learning about this, Sakata and works out a “plan” to save Iwadate but … … On the other hand, magazine reporter Kanezaki Mamoru (Yamaguchi Makiya) finds out about Sakata while doing a story on compulsory investigation and thinks back to the incident 29 years ago where Sakata’s late father Yosei (Nakahara Taeko) was arrested. Yosei embezzled 50 million yen from the estate of a deceased construction company president whom he served as a legal adviser. Although Yosei admitted to the charge, he kept silent and got a two-year jail sentence. Considering that this spate of incidents together with Yosei’s case 29 years ago would make an interesting piece, Kanezaki travels to Hiroshima. Okouchi and Masumoto try every means possible to cover up the truth of the bribery case. And the Special Investigation Department is bent on protecting the reputation of prosecutors. Then, Kanezaki exposes the truth of the case involving Sakata’s father with the aim of causing the downfall of the prosecutors. Sakata gets to a surprising truth as different motives intersect … …
Official Website: www.tv-asahi.co.jp/kenjinohonkai

This blog contains information and musings on current and upcoming Japanese dramas but is not intended to be comprehensive.
View all posts by jadefrost →
This entry was posted in Fall 2016 Drama Specials, TV Asahi and tagged Ibu Masato, Kamikawa Takaya, Kenji no Honkai, Matsushita Yuki, Motokariya Yuika. Bookmark the permalink.