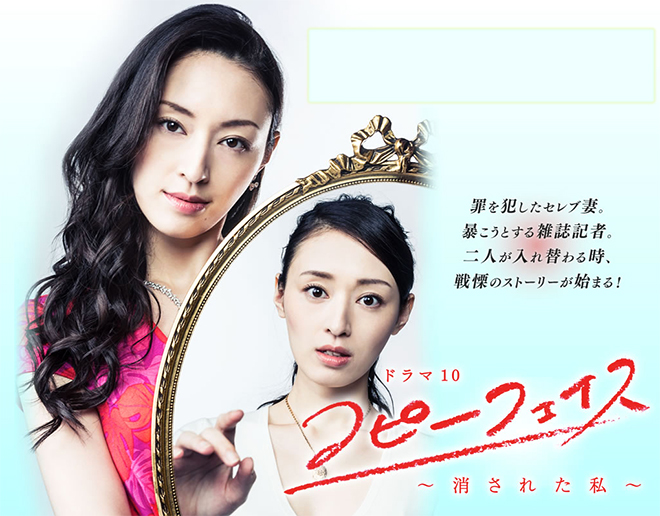 Story
Hirosawa Nodoka is a freelance journalist for a weekly magazine chasing after a scoop. She gets close to Fuyuko, the wife of Asakura Shuji, the young chairman of a plastic surgery clinic, in an attempt at undercover investigation to expose the clinic’s misdeeds. However, the flight that she had boarded in pursuit of Fuyuko crashes in an accident. Misidentified as Fuyuko, Nodoka is saved with the best medical technology and given Fuyuko’s face through plastic surgery. She lives with the belief that she is Asakura’s wife for a while due to memory loss triggered by the shock of the accident. By the time she completely regains her memory, she has already fallen in love with the man who is another woman’s husband. Nodoka decides to continue to with the pretense of being Fuyuko and infiltrate the Asakura household. She first meets her magazine editor Tachibana Shinichi to tell him the whole story and enlists his help. Meanwhile, Asakura Clinic moves to publicise Nodoka’s recovery and Nodoka participates in order to gather information. The change in his wife brings back Shuji’s love for her. As they start to build rapport, Nodoka receives a phone call from someone claiming to be a victim of the hospital … …

Characters
Kuriyama Chiaki as Hirosawa Nodoka/Asakura Fuyuko
Hirosawa Nodoka: A single, freelance magazine reporter, she is an ambitious person who will even risk her life in order to get scoops. She was abandoned by her mother before she was even old enough to understand and grew up in an orphanage. She has not had a taste of family and cannot take a step to marriage because she fears that she will also abandon her child. Deep in her heart, she yearns for a warm family and marriage. She ends up taking on another person’s identity as a result of the plane crash.
Asakura Fuyuko: Asakura Shuji’s wife. An indulgent, arrogant and uninhibited woman. After marriage, she kept on betraying her husband and also has little love for their five-year-old daughter Yuma. She is mistaken for Hirosawa Nodoka in the plane accident and dies as her.

Sato Ryuta as Asakura Shuji
The young chairman of Asakura Clinic. Although he could not take up medicine because of some circumstances, he was summoned to the hospital on the strength of his management skills. He can be curt but has a kind, sincere heart. He has a deep love for his family but is tormented by his deceitful wife.

Tamaoki Reo as Asakura Hiroto
Asakura Shuji’s younger brother. The director of Asakura Clinic. A charismatic plastic surgeon who has a high profile in the media. He starts off being trusted by patients due to his genial and sincere personality. But this is actually an act. He became a doctor because he wanted to be acknowledged by his father who is an outstanding heart surgeon. However, he has an interest in plastic surgery and went on to specialise in it. His father does not consider a plastic surgeon a doctor because of his prejudice and he still cannot get his acknowledgement. He feels ashamed deep down in his heart.

Terada Minori as Asakura Hiroaki
The father of Asakura Shuji and Hiroto. The former chairman and director of Asakura Clinic. A strict man with old-fashioned way of thinking. He was an outstanding heart surgeon who established the clinic in one generation. However, he became wheelchair-bound after a stroke three years ago and retired from his position. He does not hide his dissatisfaction with Hiroto who took over the clinic and made a major shift in the direction of plastic surgery. He has treated Hiroto, who is less capable than Shuji, harshly since he was a child and this is the reason why Shuji did not go into medicine.

Tajima Reiko as Asakura Saeko
The mother of Asakura Shuji and Hiroto. She has no right to speak in the family and never disobeys what her husband says. She does not want to be cold but she has no courage. She is the first to recognise that Fuyuko has changed and actually has some situation.

Tsurumi Shingo as Tachibana Shinichi
The chief editor of the monthly magazine, Real Today. He has a sharp tongue and is violent, but he is a trustworthy boss who is good at what he does. He is the only one who knows Hirosawa Nodoka’s secret.

Ashina Sei as Mishima Nanako
The head nurse of Asakura Clinic. She has liked Asakura Shuji for some time and had confessed her feelings to him when he was a bachelor. Although she was rejected, she still has not been able to give up.

Nishihara Aki as Moriyama Chihiro
Hirosawa Nodoka’s good friend. She grew up at the same children’s orphanage and now works at the facility as a nursery school teacher.

This blog contains information and musings on current and upcoming Japanese dramas but is not intended to be comprehensive.
View all posts by jadefrost →
This entry was posted in Fall 2016 Dramas, NHK and tagged Ashina Sei, Copyface, Kuriyama Chiaki. Bookmark the permalink.