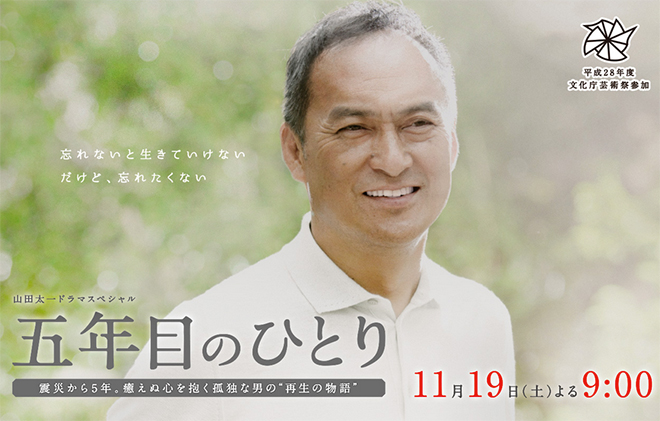 Date: From 9.00 p.m., 19 November 2016
Scriptwriter: Yamada Taichi (Quilt no Ie, Arifureta Kiseki)
Cast: Watanabe Ken, Takahashi Katsumi, Kimura Tae, Yanagiba Toshiro, Itaya Yuka, Nishihata Daigo, Makita Aju, Yamada Yu, Ichihara Etsuko
Synopsis: Junior high school student Matusnaga Ami (Makita Aju) is on her way home from a cultural festival when she is stopped by a middle-aged male stranger (Watanabe Ken) at an overhead bridge. The man says he saw her dance on stage at the festival and calls it beautiful and the best performance. This unexpected praise gets Ami ecstatic. But her mother Akie (Itaya Yuka) becomes very concerned after hearing this and even makes a fuss by calling the police to the house. Several days later, Ami happens to see the same man again. She learns that he works part-time at a small bakery called Kokodake no Panya along a desolate shopping street. It seems that this man Kizaki Shuji had been hospitalised for a compound fracture for almost six months and moved from his hometown to this town in Tokyo at the invitation of an acquaintance Hanamiya Kyoko (Ichihara Etsuko) to work for free as social rehabilitation. Ami does not think he is a bad man like her mother suspects. She gradually begins to open up to him through their conversations. Then one day, she hears about Kizaki’s circumstances from the bakery owner, Ueno Hiroshi (Takahashi Katsumi). In fact, Kizaki lost his family of eight in the tsunami caused by the Great East Japan Earthquake five years ago and his emotional scars have still not been healed. This is the story of the aftermath and rebirth through the unlikely interaction between a middle-aged man and a teenage girl.
Official Website: www.asahi.co.jp/koorinowadachi

This blog contains information and musings on current and upcoming Japanese dramas but is not intended to be comprehensive.
View all posts by jadefrost →
This entry was posted in Fall 2016 Drama Specials, TV Asahi and tagged Gonenme no Hitori, Itaya Yuka, Kimura Tae, Makita Aju, Watanabe Ken, Yanagiba Toshiro. Bookmark the permalink.