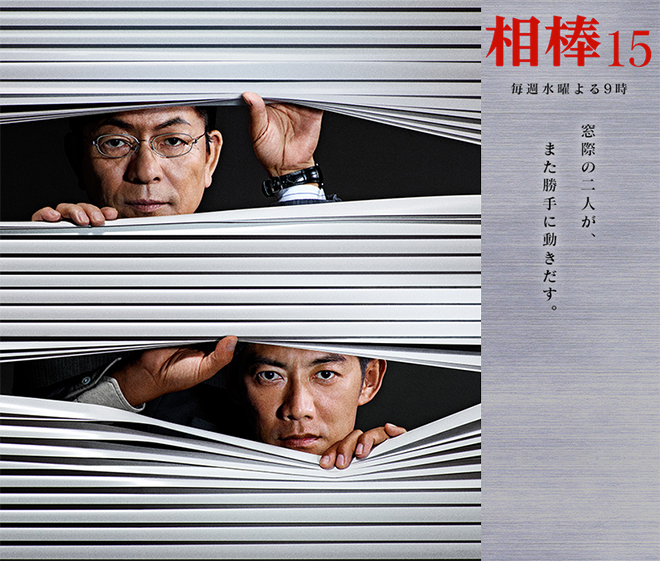 Story
A woman who says she cursed someone to death, comes to the Tokyo Metropolitan Police Department’s First Investigative Division, wanting to be punished. However, Itami Kenichi and the other detectives pay no attention to the woman and send her away. Aoki Toshio reports the whole episode to Sugishita Ukyo. Aoki has a deep connection with the Special Missions Unit. He once witnessed the murder of a woman in the apartment across from his, but refused to give a statement because of his extreme disgust of the police. But this spring, he was hired as a special investigation officer of the cyber security task force and has been going in and out of the section as well. Ukyo takes an interest in what the woman said and visits her. She is Kurusu Hatsue and she claims that she has cursed three people to death in the last decade. The next day, Kaburagi Wataru comes to the Special Missions Unit. When his training at the police academy ended, he was assigned not to the investigation department that he wanted, but to the Public Relations Division which is headed by Yashiro Miyako. And yet, Kaburagi goes to visit Ukyo after being intrigued by the case of the curse which he heard from Aoki who was in his batch at the police academy. When Ukyo and Kaburagi check up on Hatsue, there were indeed three mysterious deaths around her. Although she is fearful that their deaths were because of her curse, her grandmother Toyo, who lives in Aomori, is behind this. Toyo possesses strange power and Hatsue seems to believe that she inherited this power too. Ukyo and Kaburagi proceed with the investigation without being able to get a grasp of what they should examine and where they are headed. in this baffling series of murders. Meanwhile, Miyako receives an unexpected phone call from a dangerous person who has become an enemy of the police as well as the country. Was the accident an accident of was it murder because of a curse?

Characters
Mizutani Yutaka as Sugishita Ukyo
A police officer of the Special Missions Unit who unravels the mysteries of cases with brilliant deduction. After he joined the National Police Agency as a career officer, he was seconded to the Tokyo Metropolitan Police Department and demonstrated formidable ability at the Second Investigative Division which handles financial cases. However, he got on the bad side of the top brass because he is too capable and was forced into a leisurely post in the Special Missions Unit. Because the subordinates that have been assigned to him have resigned one after another, the unit is mocked as the “graveyard of talented people”. Nevertheless, he repeatedly pokes his nose into cases due to his curiosity and tries to solve them.

Sorimachi Takashi as Kaburagi Wataru
A former career bureaucrat from the Ministry of Justice who was seconded to the Tokyo Metropolitan Police. As a result of his excessive preoccupation with investigations, he was practically dismissed by the Ministry and transferred to the Tokyo Metropolitan Police Department in an unusual step. Although he was once assigned to the Public Relations Division, he is thinking of keeping his distance from Yashiro Miyako because he has been instructed by Kusakabe Yahiko to probe into the people around her and sounds her out on his transfer request and gets his wish to move to the Special Missions Unit.

Suzuki Anju as Tsukimoto Sachiko
A woman who became the female proprietress of ‘Hana no Sato’ through the recommendation of Sugishita Ukyo whose acquaintance she made through a case. She had attempted murder to avenge her husband in the past and was arrested by Ukyo, but served her sentence as a model prisoner and was released from prison. She acknowledges that she was once an “out-of-luck woman” because of countless misfortune. But her fortune improved after she came out of prison.

Asari Yosuke as Aoki Toshio
He was a civil servant who worked at a government office, but he was hired as a special investigator due to his computer expertise and the connections of the Assistant Commissioner who is his father’s friend. He was in the same batch as Kaburagi Wataru at the police academy and they go drinking together. However, he had an extreme loathing of the police and he seems to hold quite a grudge against Kaburagi and Sugishita Ukyo who had set him up in the past. He has few friends.

Enoki Takaaki as Kusakabe Yahiko
The Vice Minister of Justice. A career bureaucrat of the Ministry of Justice. Although the post requires a qualified public prosecutor, he was hurriedly made the vice minister as a stopgap measure because of the sudden death of the previous vice minister. Therefore, it is unlikely that he can go further than this. However, he is conscious of dissent and acts on his own beliefs. He values his former subordinate Kaburagi Wataru and also favours his transfer to the Tokyo Metropolitan Police.

Osugi Ren as Kinugasa Toji
The man who launched the Tokyo Metropolitan Police Department’s cyber security task force. He has been considering expanding the scope of the task force to deal with all sorts of cyber crime that occurs frequently. He is an acquaintance of Kai Mineaki and they keep each others power relationships within the police organisation in check. He is also a friend of Aoki Toshio’s father and the rumour is that he used his influence to hire Aoki.

Nakama Yukie as Yashiro Miyako
Although she had been seconded to the Cabinet Information Research Office as a career bureaucrat of the National Police Agency, she becomes the head of the Public Relations Division. However, she is believed to have had a close relationship with a Russian spy who went into exile in the US and has been marked by the Public Security Intelligence Agency. A single mother with a daughter. She knows that Kaburagi Wataru was ordered to probe the people around her and appeals to Kai Mineaki for Kaburagi’s transfer to the Special Missions Unit.

Ishizaka Koji as Kai Mineaki
The National Police Agency’s deputy commissioner who used to be the number two man until he was demoted to the post of commissioner-general’s secretariat in response to the series of injury cases that his son Toru who belonged to the Special Missions Unit caused. His influence within the police remains big in spite of this and he even pulls strings for Kaburagi Wataru’s transfer to the unit because of a request from Yashiro Miyako. Although Sugishita Ukyo is described as a dangerous man, he acknowledges his capabilities.

This blog contains information and musings on current and upcoming Japanese dramas but is not intended to be comprehensive.
View all posts by jadefrost →
This entry was posted in Fall 2016 Dramas, TV Asahi and tagged Aibou Series, Mizutani Yutaka, Nakama Yukie, Osugi Ren, Sorimachi Takashi. Bookmark the permalink.