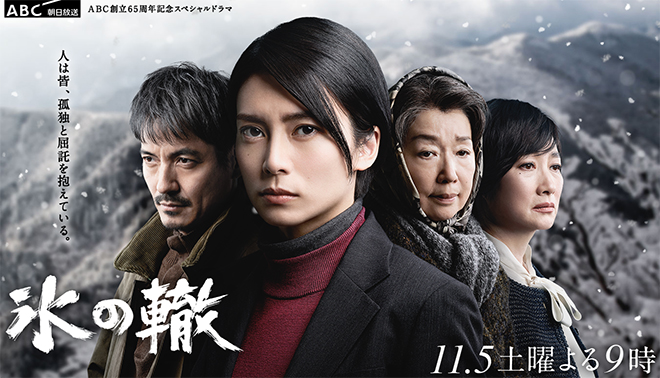 Date: From 9.00 p.m., 5 November 2016
Original Work: Koori no Wadachi by Sakuragi Shino
Scriptwriter: Aoki Kenji
Cast: Shibasaki Kou, Sawamura Ikki, Shiomi Sansei, Yo Kimiko, Shimada Kyusaku, Yoshikura Aoi, Ozaki Uso, Kishibe Ittoku, Miyamoto Nobuko, Negishi Toshie, Kaneko Tatsu, Shinagawa Toru
Synopsis: Daimon Mayu (Shibasaki Kou) is a rookie detective with the Hokkaido Prefectural Police’s Kushiro Chuo Police HQ. Called “the woman who wears protective kendo gear” because of her very serious and aloof personality, Mayu has no mother. Her father, Shiro (Shiomi Sansei), who is her only kin, is ill and has a very short time to live. This once capable detective just lies in bed now. Mayu’s trainer, Assistant Inspector Katagiri Shuhei (Sawamura Ikki), was one of the detectives that Shiro had trained back when Katagiri was a newcomer. He also knows the secret of Mayu’s background. Mayu and Katagiri are put in charge of investigating an unidentified man whose body was found frozen in Kushiro’s snow fields. The man turns out to be Kato Senkichi (Kaneko Tatsu), who is from Sapporo and has a criminal record. Alcohol and sleeping pills were detected in his body according to the autopsy results. Kato’s previous conviction 30 years ago was for being a pimp and Shiro’s signature is on the investigation documents from that period. According to Shiro, Kato was an intermediary for human trafficking before the the Sapporo Olympics. Mayu and Katagiri proceed to investigate his death as foul play. At that point, a former taxi driver, Takikawa Nobuo (Shinagawa Toru), is murdered in another incident. Kato’s case is taken over by the police precinct, and Mayu and Katagiri are pulled into Takikawa’s investigation. Like Kato, Takikawa came from Sapporo and rented a car at Kushiro. That car is discovered in front of Yonezawa Suisan at a zone for factories at Kushiro Port. Yonezawa Sayuri (Yo Kimiko), the company president who runs Yonezawa Suisan, is famous and influential in Kushiro. Mayu is unable to get anything from interviewing Sayuri, but she finds Hyodo Chieko (Miyamoto Nobuko) working as a cleaner. Mayu and Chieko are acquainted because of a winter ice skating rink and they call each other “winter friend”. Then Mayu discovers the same painkillers that Shiro takes inside the rental car. According to Takikawa’s doctor, Takikawa did not have long to live. He had rejected medical treatment and it seems that he had only been taking the painkillers. Takikawa left behind a large volume of books at home. Because her father loves books too, Mayu picks up an old book as she tries to imagine Takikawa’s bachelor life. The book is ‘Hakkin no Koma’, a collection of poems by Kitahara Hakushu. She opens to the page where a receipt has been stuck in between, in place of a bookmark and there is a poem. The collection of poems was written for someone named Catherine. When Mayu visits the old book shop whose name was on the receipt, she learns that Takikawa had bought the book when he was young and sent it to the person he liked, but it had come back to him after going around. Apart from the books, Mayu decides to bring Takikawa’s pile of videos back to Kushiro as investigation materials. Taking advantage of her visit to Sapporo, She makes a side trip to visit Kato’s wife Akemi (Negishi Toshie) who works at a bar. At the bar, a woman who claims to be the criminal unexpectedly comes to turn herself in, but … …
Official Website: www.asahi.co.jp/koorinowadachi

This blog contains information and musings on current and upcoming Japanese dramas but is not intended to be comprehensive.
View all posts by jadefrost →
This entry was posted in Fall 2016 Drama Specials, TV Asahi and tagged Koori no Wadachi, Sawamura Ikki, Shibasaki Kou, Yo Kimiko. Bookmark the permalink.