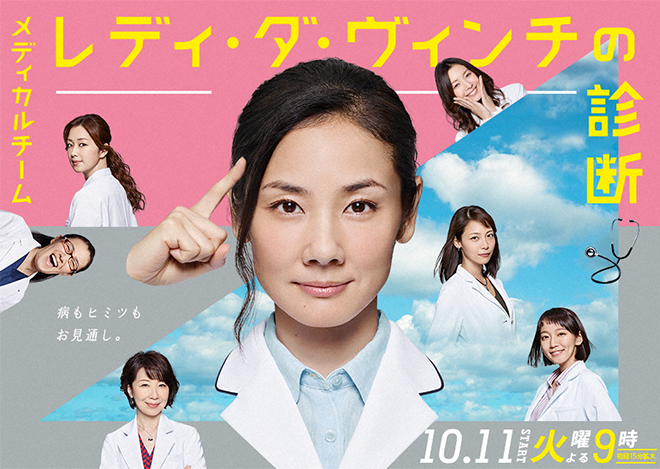 Story
Tachibana Shiho used to be a top neurosurgeon who could pull off any surgery no matter how difficult it was. One day, she makes the decision to quit being a doctor after having a hallucination during surgery. However, her former professor Kitabatake Masayuki, who is now the director of Toko University Hospital, has a high regard for her skills as a doctor. She is persuaded to join his hospital’s analysis and diagnostic department, also known as “Lady da Vinci,” as a diagnostician and will not have to do surgery. But there are many doctors in the hospital who hope that Kitabatake will lose his standing. The head of the Analysis and Diagnostic Department, Iwakura Yoko, and general manager, Sasaki Shinya, are scheming to get Kitabatake dismissed and take his place. While commuting to work on her first day, Shiho encounters Kota, a nursery school boy who complains of a stomachache and vomits blood. He is taken to Toko University Hospital and it is determined that he has a nail in his stomach. Shiho briskly gives instructions to houseman Tamaru Ayaka, ER doctor Satomi Aoi and surgeon Nitta Yukino who are present, but Yoko is furious that she was not told about Shiho’s assignment to her department and expresses her anger to Kitabatake. After the treatment ends, the pathologist Uematsu Yui and neurophysician Murakami Natsumi go to question Kota but he does not give any answers. On the other hand, Shiho visits his mother, Miki, who is a famous culinary expert. She tells her that the situation this time can be considered abuse and deliberately provokes Miki. Ayaka complains about this to the nurses Fujimoto Shuji and Watanabe Hiroshi, but Shiho does not care. She directs Ayaka to check the details of something that was taken out from Kota’s stomach during surgery. With the help of Miyabe Kohei, a medical representative of a drug manufacturer, Ayaka monitors Kota. Then they see an astonishing sight and as a result the name of the illness becomes clear. However, Kota’s condition worsens again a short while later and this time Miki develops the same symptoms too. Meanwhile Yukino, who is the only one in the department that knows about Shiho’s ability, questions why Shiho will not do surgeries. Shiho finds herself working together but occasionally clashing with these outstanding, strong, individualistic female characters who use knowledge and skills in their areas of specialisation to determine the causes of all sorts of illnesses that doctors cannot figure out and save patients.

Characters
Yoshida Yo as Tachibana Shiho
A doctor of Toko University Hospital’s Analysis and Diagnostic Department. She used to be an outstanding neurosurgeon at a general hospital but decides to quit being a doctor after hallucinating during a surgery. However, she is persuaded by her former teacher Kitabatake Masayuki and becomes a diagnostician on condition that she does no do surgeries. She feels strongly about saving patients and her single-mindedness gradually starts to influence the people around her and also has a strong sense of justice. Her diagnosis methods are unconventional and at times she even gets out of control. She is a single mother of a 10-year-old daughter, Mao.

Takahashi Katsunori as Kitabatake Masayuki
The director of Toko University Hospital. He made a name for himself as a doctor at a young age and has just taken up the position of hospital director at the age of 50. He is almost held responsible by the board of trustees for the management of the heavily indebted hospital. But in an unexpected twist, he sets up the Analysis and Diagnostic Department as his trump card to turnaround the hospital and declares to them that he will create “ideal medical care” which will save the people from illnesses of unknown causes. He is a shrewd strategist and it is difficult to know what he is thinking. He has a high regard for Tachibana Shiho’s skills as a doctor and is the only one who knows her past.

Aibu Saki as Nitta Yukino
A surgeon of Toko University Hospital’s Analysis and Diagnostic Department. A talented young doctor with outstanding surgical skills. Despite her curt, dismissive attitude, her ability is acknowledge by the people around her. She likes surgeries more than her concern for patients. She aims to specialise as a surgeon and has moved from the Department of Neurosurgery to the Department of Cardiovascular Surgery, but she was transferred to the Analysis and Diagnostic Department for some reason.

Yoshioka Riho as Tamaru Ayaka
A doctor of Toko University Hospital’s Analysis and Diagnostic Department. She has been very outstanding since student days and graduated at the top of Toko University’s faculty of medicine. She is rotating around each department as a houseman. Her parents died when she was young and she grew up in a facility. She obtained a scholarship and went on to medical school. She is a survivor and does not get discouraged. Although she is at the mercy of the methods of the unconventional Tachibana Shiho, she pushes ahead to investigate patients’ illnesses daily as a good partner.

Takizawa Saori as Uematsu Yui
A doctor of Toko University Hospital’s Analysis and Diagnostic Department. She specialises in pathology and investigates unidentified illnesses from the pathological perspective. She loves matchmaking parties and goes all out to catch a handsome, rich man. She always leaves the hospital by 5 pm. She sides with Iwakura Yoko and Murakami Natsumi.

Kobayashi Katsuya as Takasugi Yuki
A handsome cardiovascular surgeon at Toko University Hospital who is popular with females. He had worked with Nitta Yukino at Department of Cardiovascular Surgery and is digging into Tachibana Shiho’s past at Yukino’s request.

Fueki Yuko as Murakami Natsumi
A neurologist of Toko University Hospital’s Analysis and Diagnostic Department. She is a follower of Iwakura Yoko, the head of the department. Because she always acts in concert with Yoko, she is at odds with Tachibana Shiho on everything at the conferences to investigate the unidentified illnesses of patients.

Totsugi Shigeyuki as Sasaki Shinya
The general manager of Toko University Hospital. He is in charge of the overall management of the hospital but Kitabatake Masayuki always gets in the way, so he hangs out with Iwakura Yoko and schemes to make Kitabatake lose his standing. He is incredibly weak with people of power such as the trustees and politicians.

Ito Ran as Iwakura Yoko
The head of Toko University Hospital’s Analysis and Diagnostic Department. A physician. She and Kitabatake Masayuki, who joined the hospital in the same year, are rivals and she fought for the seat of hospital director but lost. She excels at internal politics and is aiming to be the next hospital director. She appears on TV and in magazines and enjoys popularity on a TV programme ‘Doctor SOS’ where she is a regular. She behaves as the ruler of the department and regards Tachibana Shiho with hostility. She clashes with Shiho over every investigation of unidentified illness. But in spite of their different approaches, she shares the same desire to save patients.

This blog contains information and musings on current and upcoming Japanese dramas but is not intended to be comprehensive.
View all posts by jadefrost →
This entry was posted in Fall 2016 Dramas, Fuji TV and tagged Aibu Saki, Medical Team ~ Lady Da Vinci no Shindan, Takahashi Katsunori, Yoshida Yo. Bookmark the permalink.