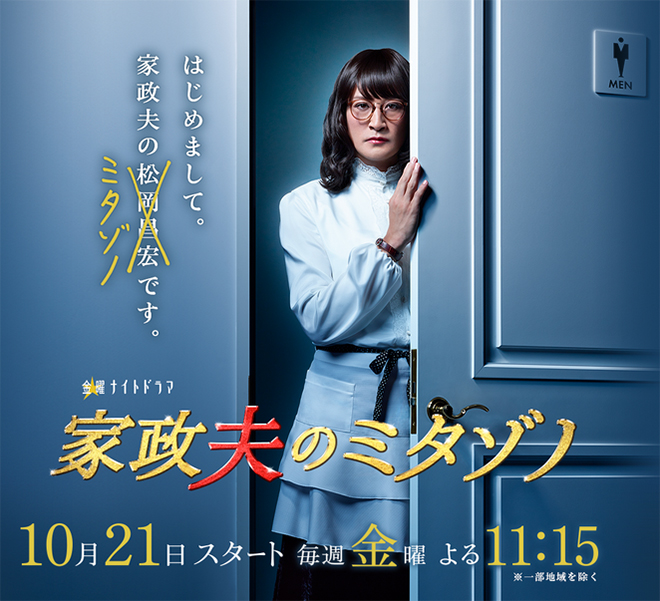 Story
One day, two new housekeepers from a housekeeping agency arrive at a luxurious house in a residential neighbourhood. They are Hanada Emiri and an obviously sturdy, big woman Mitazono Kaoru. Mitazono actually has a secret. “She” is a male. Mitazono handles housework such as cleaning, laundry, cooking and babysitting perfectly in an industry dominated by females. However, it is not just the dirt in the house that Mitazono cleans. He completely cleans off “deep-rooted dirt” in the households that he is assigned to each time. These are the households that society calls the “successful” where the people are proud, condescending and insufferable. Mitazono learns the family secrets and slowly lays traps to expose all of the secrets and reveal the family for who they really are. Then he gives the last push that breaks up relationships. However, this becomes the catalyst for the family to start again and solve the problems they have. The governor of Tokyo, Ozuzame Yoichiro, lives with his wife Kiyomi, son Naotaro and daughter Miho in this house. They are all very proud and look down on Mitazono and Emiri. However, just when Mitazono and Emiri are about to start doing the housework, Ozuzame’s chauffeur accidentally spills coffee on Ozuzame shirt. Ozuzame is beside himself with rage because he must wear this shirt today. Mitazono removes the coffee stain with a first-aid kit and dishwashing liquid in a matter of seconds. As a result, this raises the governor’s opinion on him. In fact, a threatening letter containing the words “Call off the Tokyo governor election” was delivered to Ozuzame right before this. Moreover, this does not appear to the first time it has happened. Knowing this, Mitazono rummages through the garbage bags placed at the garbage collection area and starts to probe into the family’s true state of affairs. Then one day, Mitazono is asked by Kiyomi to deliver something to Ozuzame and secretly peeps at its contents which appears to be secret accounts of over 3 billion yen in illegal donations. He also learns Kiyomi’s shocking secret and eventually the darkness of the family, and sets a trap … …

Characters
Matsuoka Masahiro as Mitazono Kaoru
A housekeeper who belongs to a housekeeping agency. He is taciturn, turns up at unexpected moments and has an inscrutable, eerie side but his housekeeping skills are as good as a professional. He displays an outstanding ability in everything from cleaning to cooking. Because of that, he quickly earns the trust of the families that he is sent to. However, once he notices the “secrets” that a family is hiding, he gets the urge to expose them. He will surround the family with a trap without anyone noticing and start to reveal their true nature.

Shimizu Fumika as Hanada Emiri
A housekeeper who belongs to a housekeeping agency. Because she is often paired with Mitazono Kaoru and sent to clients’ houses, she has seen his elusiveness, eeriness and highly skilled housekeeping with her own eyes. She is curious to know why he dresses as a female and meddles in the family affairs of other people.

Shibamoto Yuki as Fujikawa Ran
A housekeeper who belongs to a housekeeping agency. She arrived at Musubi Yoriko’s place after running away from a life of misfortune. She loves talking about the misfortune of others and gossiping about famous people.

Hotta Akane as Arisawa Haruki
A housekeeper who belongs to a housekeeping agency. Although she is young, she is struggling financially and after numerous, repeated conflict, she was picked up by Musubi Yoriko. She loves gossip and badmouthing at the agency.

Hirata Atsuko as Abe Maria
A housekeeper who belongs to a housekeeping agency. She is the only married one in the agency and has because she has years of housekeeping experience, she has an enormous amount of information and is well-connected. She is also good at the latest trends in all sorts of genres.

Yo Kimiko as Musubbi Yoriko
The head of the housekeeping agency which Mitazono Kaoru and the others belong to. Although she is feels nervous about Mitazono exposing the secrets of a client each time, a part of her looks forward to hearing those secrets … … She also knows why Mitazono dresses as a female?

This blog contains information and musings on current and upcoming Japanese dramas but is not intended to be comprehensive.
View all posts by jadefrost →
This entry was posted in Fall 2016 Dramas, TV Asahi and tagged Kaseifu no Mitazono Series, Matsuoka Masahiro, Yo Kimiko. Bookmark the permalink.