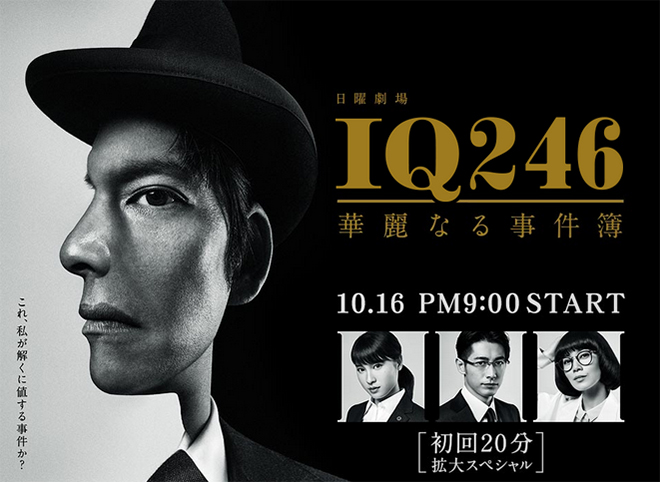 Story
The Homonji family is a famous family in Kita Kamakura and descendants of a noble man whose existence was hidden from the powers that be. Even now, only very few know about their existence. Scholarly types who research all branches of knowledge run in this family and the line of eldest sons have had high IQ of 246 passed down from generation to generation. Homonji Sharaku, the current 89th head of the Homonji family, is also a genius with an IQ of 246. There is too little excitement for him in this world governed by ordinary people and he constantly has too much free time on his hands. He is fond of saying, “I’m bored. I’m bored. Where’s a case that’s worth my while to solve?” One day, Wato Soko, a detective of the Tokyo Metropolitan Police Department, is suddenly assigned to the First Investigative Division. However, she is given the mission to guard Homonji rather than investigate brutal crimes. Why is a detective of the Tokyo Metropolitan Police which polices Tokyo in Kita Kamakura? It seems that everyone who was assigned to Homonji resigned within a month. Soko visits the Homoji residence and is escorted by a maid to a man who meets her. She greets him with a speech about taking up her new post. However, the man is not Sharaku but his butler Kensei who is the 89th butler to serve the Homonji family. Soko is surprised that the family has a butler. A bored Sharaku had snuck out of the house in a taxi and now comes across a crime scene. He takes one look at the murdered woman and correctly guesses how the crime was committed but he is hauled in by the police for not paying the taxi fare. However, he is immediately set free on the order of the Superintendent General of the Tokyo Metropolitan Police because the Homonji family is a national secret. Hearing about Sharaku’s arrest, Keisei visits the Tokyo Metropolitan Police with Soko. Sharaku appears with air of nonchalance and correctly guesses her standard of living and emotions although they have just met for the first time. At that moment, the eccentric medical examiner Morimoto Tomomi, who is a forensics expert, has examined the dead body and narrowed down the possible suspects. Sharaku hears from a detective that it was exactly the same as his opinion and gets excited. When he returns to his residence, the wife of the very wealthy Sakuraba family arrives. She wants him to search for her live-in sushi chef Miyajima, who has gone missing. Although Sharaku is unwilling, he starts starts making inquiries. He finds Miyajima’s favourite knife and sharpening stone in the kitchen and immediately has a glint in his eyes. Sharaku continues making inquiries but is gleeful unlike his earlier attitude. He ends up joining dinner at the Sakuraba residence and makes the acquaintance of the main guest, Saotome Shin, who is an award-winning creative director for commercials. Amid the congenial atmosphere, Saotome’s mobile phone rings. The caller tells him that a robber entered the company and murdered a subordinate. Saotome leaves to go back to his office. Sensing something, Sharuka follows him … …

Characters
Oda Yuji as Homonji Sharaku
The descendant of a descendant of an illegitimate descendant of an aristocratic family. He is the eldest son and 89th head of the Homonji family. The Homonji family is a scholarly family that has only pursued knowledge regardless of the powers that be and the line of eldest sons have had high IQ of 246 passed down from generation to generation. This unusual ability is a result of them being confined in Kita Kamakura by the powers that be for close to 800 years. He constantly has too much free time on his hands and wanders around searching for exquisite cases that are worth his while to solve.

Tsuchiya Tao as Wato Soko
She aimed to be a police officer because she has a strong sense of justice and wants a job where she can be of help to people. She is the type who plunges headlong into work and romance once she decides on something, but she is also a girl wants to keep up with trends. Although she has the mind of an ordinary person, she has confidence in her physical strength. She is driven by emotions more than reason but has the common sense of women today. She has a romantic constitution and becomes obsessed with crazy fantasies of male passersby and at times even male criminals. And her appetite is enormous. She is small-sized but has big pride as is typical with young people today although she is diligent and righteous. She may have the biggest conscience in this story.

Dean Fujioka as Kensei
The 89th butler of the Homonji family and son of Kenjo, Sharaku’s foster father. He is made to accompany Sharaku and carry out research. While he says “With all due respect …”, there are times when he tries to make deductions. Sharaku will not acknowledge those ideas. He would say with modesty that he was out of line, but at times these become hints to Sharaku. Because he is a man of integrity, he smoothly praises Sharaku’s childish genius, makes people feel good and settles incidents. He is a little more familiar than Sharaku with the general knowledge of the outside world and resolves matters with people whom Sharaku was rude or caused trouble to. He is athletic and also accomplished in martial arts and willing to injure himself to protect Sharaku.

Saisai Eisuke as Tanada Bunroku
The Superintendent General of the Tokyo Metropolitan Police. He makes Wato Soko monitor Homonji Sharaku under the pretext of guarding him to ensure he does not meddle in police investigations. But he will have a sour face and feel bitter each time a difficult case is solved by Sharaku. He was classmates and rivals with Kenjo, the 88th butler of the Homonji family in junior high school, high school and university. He does not like Sharaku’s achievements all the more because he has held a grudge against Kenjo ever since his first love was stolen by him. He just does not want to lose to Kenjo.

Terajima Susumu as Kenjo
Kensei’s father. The 88th butler and foster parent who brought up Homonji Sharaku. He loves Sharaku like his biological son, worries about his future and wants him to settle down quickly. He wishes that Sharaku will be blessed with a child to pass on his knowledge to and devotedly waits on Sharaku as if he is forever a child. He is the only person who can scold Sharaku.

Nakatani Miki as Morimoto Tomomi
A medical examiner who looks like a plain forensics expert. She meets Homonji Sharaku and is so captivated by his powers of deduction that she becomes his fan. Because of that, she cannot say no to his requests and ends up accommodating him. Although she likes Sharaku, she is given the cold shoulder each time. Even that makes her feel good. She is some eccentricities. She drinks miso soup from a beaker while performing an autopsy and puts funeral make up on the dead body after she finishes.

This blog contains information and musings on current and upcoming Japanese dramas but is not intended to be comprehensive.
View all posts by jadefrost →
This entry was posted in Fall 2016 Dramas, TBS/MBS and tagged Dean Fujioka, IQ246 ~ Kareinaru Jikenbo, Nakatani Miki, Oda Yuji, Terajima Susumu, Tsuchiya Tao. Bookmark the permalink.