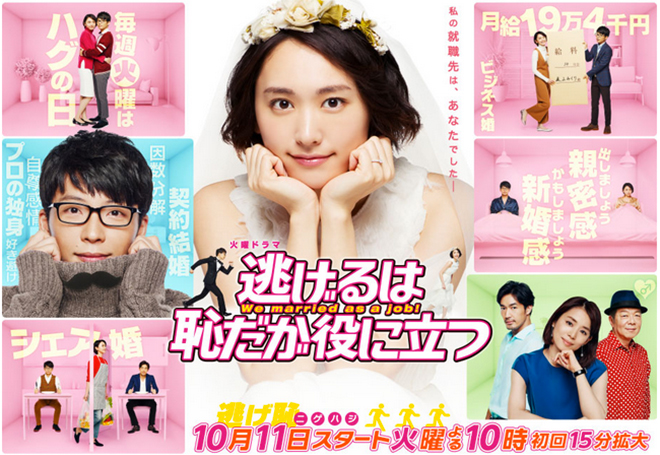 Story
A jobless, single woman marries a single businessman as a job! But the relationship between the husband (employer) and the wife (employee) gets more and more romantic the longer they live together … 25-year-old Moriyama Mikuri finished graduate school but had no job offers. She became a temporary employee but was even laid off. So while she is searching for a job right now, Mikuri feels unwanted and displaced. Her father Tochio cannot bear to see her like this and introduces her to his acquaintance, Tsuzaki Hiramasa. And so, Mikuri starts working as a housekeeper for the 35-year-old Tsuzaki. Mikuri wins his trust with her meticulous work. However, an incident causes her to lose this job. Anxious about the future, Mikuri ends up proposing to Tsuzaki that they get married in the sense of work. Tsuzaki, who has never had a girlfriend and romance in his 35 years, is proud that he is a “professional bachelor”. But he determines the effectiveness of Mikuri’s sudden proposal to marry for work. The two of them begin a contract marriage without telling the people around them. How will married life with Mikuri change Tsuzaki who usually hardly shows emotion and does not even realise that he is in love?

Characters
Aragaki Yui as Moriyama Mikuri
She has a diligent nature and also good manners and is a hard worker. But the astounding things she says now and then is something she inherited from her father Tochiro. Daydreaming is her way to escape from harsh reality. She did not get a job offer while job hunting, went on to a graduate school in humanities and qualified to be a clinical psychologist, but that also went to the wind. She was glad to be a temporary worker but was soon terminated and is looking for employment now. Called “crafty” by her boyfriend in university, she has not been able to have a romance or get married because of this trauma. At the suggestion of her worried father, she finds work as the domestic help of Tsuzaki Hiramasa whom Tochiro knows through work. However, she is forced to make an extreme choice when her parents, whom she lives with, start talking about moving to the countryside following her father’s retirement.

Hoshino Gen as Tsuzaki Hiramasa
A plain salaryman who works for an IT company. A graduate of Kyoto University, he has a very serious personality and hates dishonesty. He is proud that he is a “professional bachelor” who has never had a girlfriend in his 35 years. Because he is particular about cleanliness, he gives Moriyama Mikuri who comes to help around the house, detailed orders. While he does not dislike a person being at home, he favours having space and is realistic about work, but he likes Mikuri’s work attitude. Then he is told by Mikuri that she is resigning because her parents are moving. However, he accepts her unexpected proposal on her last day of work.

Otani Ryohei as Kazami Ryota
A junior at Tsuzaki Hiramasa’s company and a very desirable, handsome guy. He is contradictory with regards to marriage. On one hand, he thinks it will be good to have a helpful partner. But because he can cook, handle household chores and electrical appliances on his own, has hobbies and also has friends, he wishes to have time on his own more than the feeling of loneliness. As a result of this, he has a cool attitude towards Tsuzaki who got married but … …

Mano Erina as Tanaka Yasue
Moriyama Mikuri’s good friend. A former delinquent whose life has been full of ups and downs. She married her co-worker, a former civil servant and is the mother of a child. She suspects her husband of having an affair and is visiting her parents until she gets evidence.

Furuta Arata as Numata Yoritsuna
A gay colleague in Tsuzaki Hiramasa’s company. He is good at cooking and has a gentle, intuitive nature. He is a good confidant of Tsuzaki Hiramasa and Kazami Ryota, and suspects that Tsuzaki and Moriyama Mikuri are in a marriage of convenience.

Ishida Yuriko as Tsuchiya Yuri
Moriyama Mikuri’s aunt. A career woman who works hard for a cosmetics company. She has been single all her life and has not had experience with men. Her relationship with Mikuri is like that of drinking buddies and she is also a good confidant. She gets acquainted with Kazami Ryota because of Mikuri and Tsuzaki Hiramasa and becomes Kazami’s landlady through an unexpected turn of events. In her 20s, she thought she would get married in a matter of time. But her 30s and 40s came just like that without any encounters. She enjoys her work and is satisfied with who she is today but her loneliness is too much to hide.