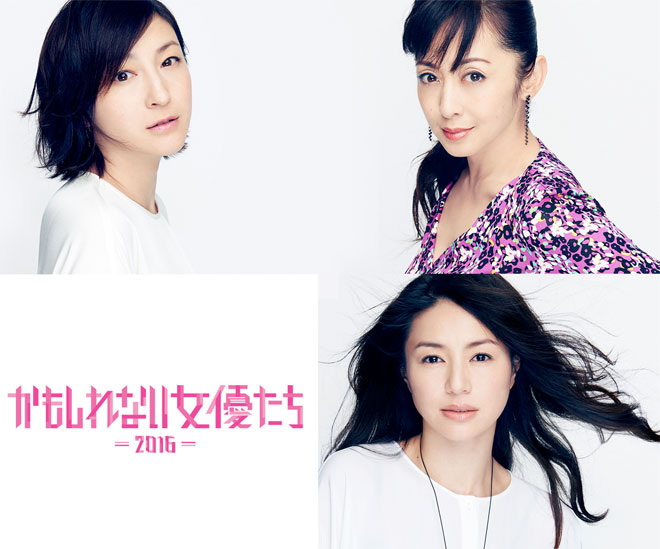 Date: From 9.00 p.m., 10 October 2016
Scriptwriter: Masuno Hidetomo (Bakarhythm) (Kuroi 10-nin no Onna, Sutekina Sentaxi)
Cast: Hirosue Ryoko, Igawa Haruka, Saito Yuki, Kaho, Takeuchi Yuko, Lily Franky, Fujiki Naohito
Synopsis: If actresses Hirosue Ryoko, Igawa Haruka and Saito Yuki chose different paths at the turning points in their lives, what kind of life would they be leading now? In this world, Hirosue did not appear in the big 1997 drama hit, Beach Boys, with actors Sorimachi Takashi and Takenouchi Yutaka and suddenly rise to fame. She is a struggling actress in her mid 30s who gets by on part-time housekeeping work and cannot bear to give up being an actress. Hirosue fantasises about newly married life with a handsome guy and is jealous of successful actress Takeuchi Yuko who is the same age. Although she struggles alone, she works hard at her housekeeping job every day. On the other hand, Igawa did not put out the photo book ‘Good Vibrations’ at that time and has been completely forgotten now after the end of the boom of “soothing” models. She dates actor Fujiki Naohito in an unexpected turn of events. Even though she has a taste of this little happiness, she starts to grow impatient when the relationship fails to progress toward marriage. Igawa impulsively tries to make a transition to acting despite being over 40 but … … Then there is Saito who was afraid to spoil her pure idol image and did not star in Sukeban Deka in 1985. She ended up a one-hit wonder and faded away. To regain her teenage years, she attends university and majors in physics with the aspiration to graduate as a female scientist. She mixes with youth around 20 and joins matchmaking parties, making the most of student life. At night, Saito runs a popular bar that even the actress Kaho patronises … …
Official Website: www.fujitv.co.jp/b_hp/kamoshirenai