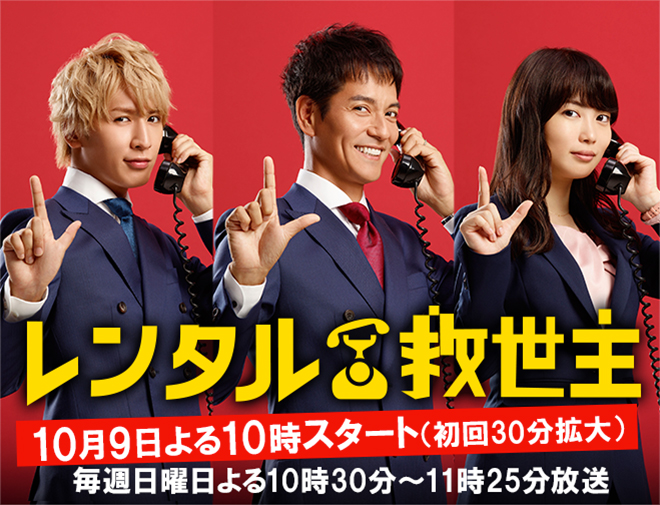 Story
“If you want help, but have no one to consult … At such times, make a phone call first!” Akenabe Yugo’s occupation is a “rental saviour”. He is a “saviour” who shows up to handle any kind of impossible demand for a limited time only. This is a peculiar, innovative rental service which has appeared as a result of a movement in the rental industry. But Akenabe is certainly not a fellow to be worshiped as a saviour. He is just a very good-natured, caring middle-aged man who was forced to risk his own life and help others as a way to make supplementary income for his family through this commission-based, for-profit, confidential service. He was cheated by a former colleague at the company he worked at and ended up saddled with a huge debt of more than 100 million yen. To make matters worse, he was mistaken by his company as an accomplice in the fraud and got sacked. He could not tell his wife Shino and child about this. Desperate to find new employment, he went to an interview at a company with a “rental rescue” line of business. At his wits end, Akenabe made an appeal at the interview with his own personal tragedy and love for his family and declared “I’ll work for your company for the rest of my life!” This went down well with the president of the company Kuro Kanta and Akenabe was hired. The work of a “rental saviour” is explained to Akenabe by Kuro. Akenabe’s first job is to save a kidnapped hostage. Following instructions, he heads to a warehouse where he finds two hostages Momoci Reiko and Kaoru. Kaoru had called for the help of a “rental saviour” without the kidnapper’s knowledge. Akenabe attempts to save them but is discovered by the kidnapper and gets caught. A crisis is imminent. Then a blonde-haired guy appears from the sky and knocks out the kidnappers in a showy action sequence. He is Aoi Denjiro, a “rental saviour” who belongs to Kuro’s company. The two hostages are rescued safely but Akenabe is mysteriously asked by Reiko why he came to save her. She weighs on his mind because she did not seek help for some reason even though she had become a hostage. Together with Aoi, Akenabe starts to check up on Reiko … … Clients hire Akenabe because, for various reasons, they can’t ask anyone else for help. As he touches their lives, he begins to understand the weaknesses they keep hidden deep within and evolves from a mere rescuer for rent to his town’s true hero.

Characters
Sawamura Ikki as Akenabe Yugo
An extremely nice man who cannot leave those in trouble alone. He should have had a peaceful life with his wife and child as a salaryman but he brought trouble on himself and was cheated. While running about alone to raise money to pay off his enormous debt, he is scouted to be a rental saviour.

Fujii Ryusei as Aoi Denjiro
A rental saviour who works with Akenabe Yugo. He is a big show-off who loves attracting people’s attention and calls it a “spotlight syndrome”. Although he is temperamental, he is a faithful guy who can distinguish a female’s scream no matter how far it is and rushes over as fast as he can.

Shida Mirai as Momochi Reiko
A mysterious girl whom Akenabe Yugo and Aoi Denjiro meet through work. She comes from a wealthy family is but she does not depend on her family for some reason and lives in a humble apartment on her own. She does not have anyone who she can call a friend.

Katsuji Ryo as Kii Roy
He is in charge of mechanics and there is nothing he cannot fix. He would produce mysterious items all of a sudden and does well in bugging and tracking. He is actually the son of the owner of an electronic shop in town.

Nakamura Anne as Hadano Iroha
A rental saviour and a mysterious woman who works as Kuro Kanta’s secretary. She says matter-of-fact, cruel things, but no one knows her real intentions. She seems to have thorough knowledge of political and financial circles. However, her past is a mystery.

Inamori Izumi as Akenabe Shino
Akenabe Yugo’s wife. She used to be a stylist and has a naive, cheerful personality. She is very happily married to Akenabe and gives him moral support, but her emotional ups and downs are intense and there are times when she also becomes the most vulnerable point to him.

Osugi Ren as Kuro Kanta
The company president who started the rent a rescuer business in Yokohama. He is greedy for money. He gathers the members at his own discretion and is also the only one who decides whether to accept a client’s request.

This blog contains information and musings on current and upcoming Japanese dramas but is not intended to be comprehensive.
View all posts by jadefrost →
This entry was posted in Fall 2016 Dramas, NTV and tagged Inamori Izumi, Katsuji Ryo, Osugi Ren, Rental Kyuseishu, Sawamura Ikki, Shida Mirai. Bookmark the permalink.