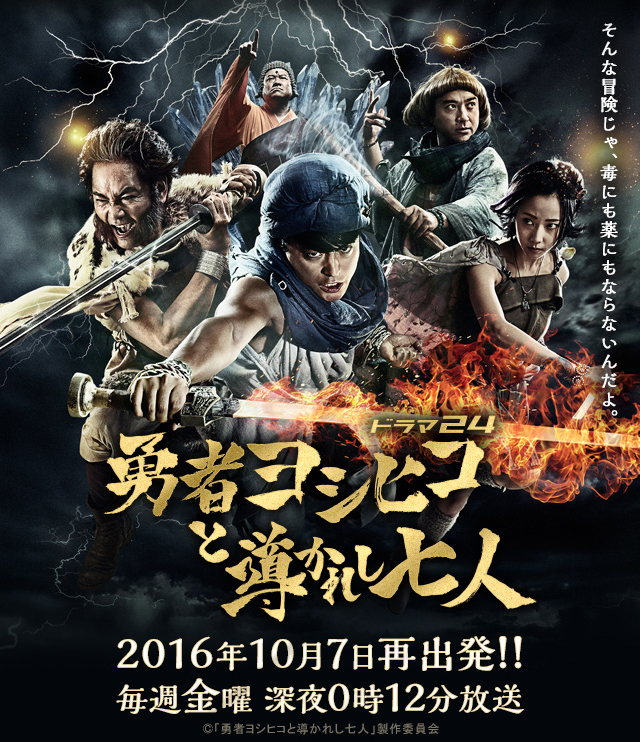 Story
Several hundred years after Yoshihiko defeated the dark spirit Deathtark in a fierce battle and saved the world, the world is once again plunged in darkness because of the devil king. Resurrected by the power of Buddha, Yoshihiko, Murasaki, Merebu and Danjo are told to defeat the devil king. The devil king has seven weak points which they must attack if they are to be able to succeed. Only destined people can go on offensive. The party of four set off on a new, dangerous journey around the world in search of these seven warriors with the pearls of destiny to bring down the devil king and return peace to the world. Guided by Buddha, they reach a village, but there are no signs of people. When Merebu calls out after finally spotting a human figure, the person’s face sends them fleeing hastily and they spend a night hiding in a small hut. Will they be able to save the world again?

Characters
Yamada Takayuki as Yoshihiko
An honest, righteous hero who easily comes under a spell because of his simplicity. He is emotional and somewhat naive.

Muro Tsuyoshi as Merebu
He uses magic and always remembers spells that he does not use and tries to cast spells on Yoshihiko.

Kinami Haruka as Murasaki
A village girl who is a little strong-willed and sarcastic. She travels with Yoshihiko and the rest in the course of events.

Takuma Shin as Danjo
A hot-blooded, excitable warrior who is the oldest among the four.

Sato Jiro as Buddha
The Buddha who acts as an oracle that informs Yoshihiko and his party about route of the journey.

This blog contains information and musings on current and upcoming Japanese dramas but is not intended to be comprehensive.
View all posts by jadefrost →
This entry was posted in Fall 2016 Dramas, TV Tokyo and tagged Sato Jiro, Yamada Takayuki, Yuusha Yoshihiko to Michigakareshi 7-nin. Bookmark the permalink.