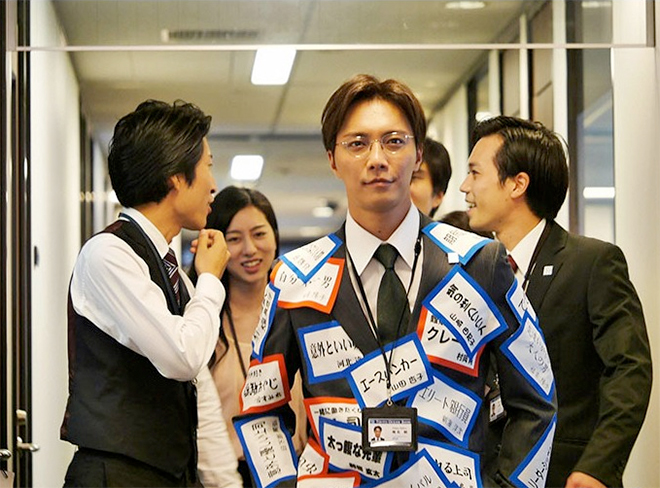 Synchronicity
Story: One day, Itsumi Eiko (Kuroki Meisa) visits a watch shop to adjust the strap of the watch that she had received as a gift from her boyfriend, and happens to meet Kawashima Akemi (Fujii Mina), her friend from high school days. The two of them are delighted to be reunited since their coming-of-age ceremony. Moreover, they discover a number of similarities from the reason for coming to the shop, to the name of their boyfriends and date they had started dating. Hearing their conversation, the owner of the bar that they are at, tells them that this phenomenon is called synchronicity. Although the two of them are excited by the series of coincidences, this vanishes the moment both of them realise something. This day 7 August 12 years ago, was the day that their friend committed suicide because of bullying that they had also participated in. Furthermore, a terrifying, unexpected “coincidence” comes at them … …
Cast: Kuroki Meisa, Fujii Mina

Harareru
Story: Shiina Tsuyoshi (Narimiya Hiroki) is a top banker who is trusted by his superiors as well as his subordinates. It can be said that the Loans Division owes its performance to him. One day, Tsuyoshi, who is in a taxi, asks the taxi driver about the fare which is higher than usual. The moment he does that, he realises that he has been immediately branded as a “fault-finding claimant”. Since that day, the assessments of people around him are not only plastered on him as labels, Tsuyoshi is taken aback to learn about their savage criticism of him which is in contrast to what they express.
Cast: Narimiya Hiroki, Mikura Mana, Watanabe Tetsu

Sutema no Onna
Story: Female announcer Toki Shiori (Fukada Kyoko) is 29 but still has not blossomed as an announcer and feels a little impatient. Her younger sister Natsuki (Abe Junko) is concerned about her suitability. Then an incident happens that will change Shiori’s routine. One day, she is accosted by a who monk who happened to pass by and he talks to her about having to give up something in order to gain something. This was the day that her favourite dress shirt was torn while she was reporting and she won grade A beef in a lottery. She gets a good job when she throws away something and eventually starts to discard personal belongings that are precious to her. Shiori soon ends up … …
Cast: Fukada Kyoko, Abe Junko, Ueno Natsuhi

Shachuu no Dekigoto
Story: In the Showa era around 30 years ago, three men happen to ride together in the last carriage of a train. A man with a thick neck (Sugimotto Tetta) and a man of delicate features (Furukawa Yuki) sit side by side. A pompous man (Kitamura Kazuki) is seated at the seat in front of them. In fact, the man with the thick neck is a policeman who is in the process of escorting the man with delicate features. The three of them appear to have a big involvement in a drug trafficking case. They try to outfox each other and the truth starts to get reeled in in their maneuvering.
Cast: Kitamura Kazuki, Furukawa Yuki, Sugimoto Tetta

This blog contains information and musings on current and upcoming Japanese dramas but is not intended to be comprehensive.
View all posts by jadefrost →
This entry was posted in Fall 2016 Drama Specials, Fuji TV and tagged Fujii Mina, Fukada Kyoko, Kitamura Kazuki, Narimiya Hiroki, Yo ni mo Kimyouna Monogatari Series. Bookmark the permalink.