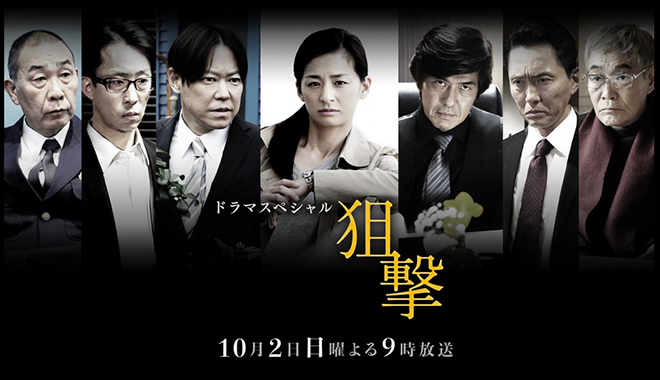 Date: From 9.00 p.m., 2 October 2016
Original Work: Sogeki Chika Sousakan by Nagase Shunsuke
Scriptwriter: Hokimoto Shinya
Cast: Ono Machiko, Abe Sadao, Kitamura Yukiya, Koichi Mantaro, Nagayama Takashi, Mashima Hidekazu, Suzuki Maika, Minami Keisuke, Emoto Akira (guest star), Suzuki Anne, Denden, Hasegawa Hatsunori, Matsushige Yutaka, Sato Koichi
Synopsis: Detective Kozuki Ryoko (Ono Machiko) of Nishi Koganei Police Precinct succeeds in arresting a rapist (Minami Keisuke) in an undercover operation that puts herself at risk. Her achievement immediately becomes the talk of the precinct, but no one approaches her. Ryoko used to belong to the Tokyo Metropolitan Police Department’s First Investigative Division until she was demoted due to an affair with her boss. Several days later, she gets called by Shirota Yoshihiko (Denden), the head of the Police Affairs Department at headquarters. Because Ryoko had use brute force on the rapist during the undercover operation, she prepares herself for censure. However, Shirota tells her that she will work for the headquarters, but remain with the police precinct in an unprecedented redeployment. Ryoko is to go to the Police Affairs Department’s Secret Inspection Unit which is under Assistant Commissioner Shizume Ryuji (Sato Koichi) with the mission of secretly investigating police officers. According to Shirota, getting involved with Shizume, who is capable of doing anything to achieve his objectives, will lead to misfortune. The unit is based in a room of a multi-tenant building. Its members are the clerk Hanamura Kayo (Suzuki Maika) and Assistant Inspector Naruse Katsumi (Kitamura Yukiya). Ryoko is brought to the interrogation room which has old bloodstains on the walls. She is suddenly ordered by Shizume to take off her clothes. He bluntly comments that she will not be useful and instructs her to do as he wants, but does not explain himself. Although she gets annoyed, she starts to unbutton … … Ryoko’s first task is to investigate a police officer facing allegations of involvement in stimulants. The person is detective Saiki Yuya (Mashima Hidekazu) of the Organised Crime Department who was the man she had an affair with. “I’ll only believe what I see with my own eyes,” she says and contacts Saiki without telling Shizume. The next day, Shizume detains Saiki. However, his crime is covered up in exchange for a demotion to the be an investigator in the Public Security Department. Ryoko opposes Shizume who says, “Our job is to protect the organisation. Getting rid of dead bodies has nothing to do with the what is right and wrong in this world,” he tells her. Then he hands Ryoko a huge stack of documents on the shooting of a candidate for prime minister. He will let her choose whether to look through everything by tomorrow or to resign from her job. 15 years ago on 30 June 2001, a sitting cabinet minister Miyata Tatsuyuki (Emoto Akira), who had been considered a candidate for the next prime minister, was shot at by someone but narrowly escaped death. It was Shizume that risked his life to protect Miyata. On that same day, Ryoko’s mother was killed by a robber in the worst day of her life.
Official Website: www.tv-asahi.co.jp/sogeki

This blog contains information and musings on current and upcoming Japanese dramas but is not intended to be comprehensive.
View all posts by jadefrost →
This entry was posted in Fall 2016 Drama Specials, TV Asahi and tagged Abe Sadao, Emoto Akira, Matsushige Yutaka, Ono Machiko, Sato Koichi, Sogeki, Suzuki Anne. Bookmark the permalink.