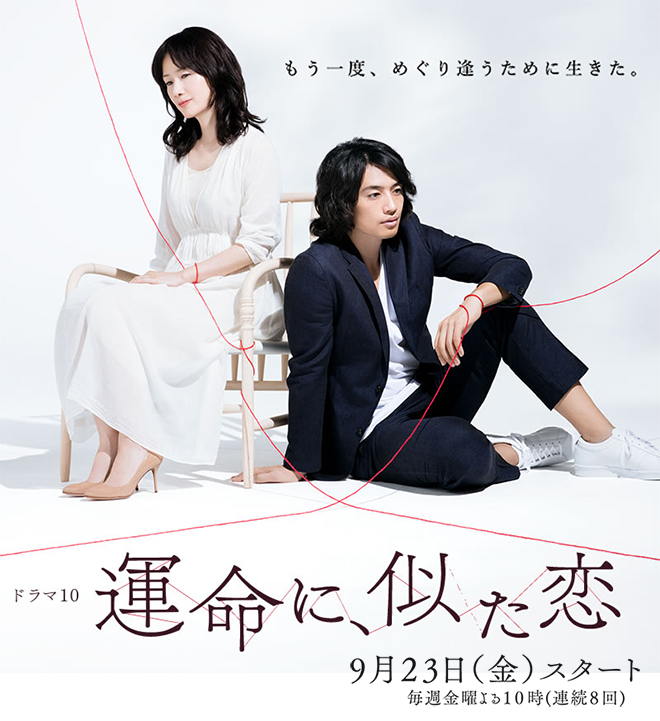 Story
During their childhood, a little girl and a boy made a pledge to meet again. Now at the age of 45, the girl, Sakurai Kasumi, is now a divorced mother and lives with her son Tsugumi, who is a high school student. She works as hard as she can at a laundry delivery shop for the wealthy, in order to make a living. One day, Kasumi meets a male designer, Ozawa Yuri, when she delivers to his address. Yuri has ventured into design for cafe interiors, furniture and accessories and is regarded as the top young designer internationally. He is somehow far too familiar with Kasumi and pokes his nose into her affairs. He even invites her to a party although she turns him down. Kasumi is initially wary, but she soon learns that Yuri has a pure heart and finds herself attracted to him. However, Yuri is man of many mysteries. He already has a relationship with a woman called Shirai Maho and he is completely submissive to his teacher, the international designer Fukami Yoshitaka. Then it occurs to Kasumi one day that Yuri is her soulmate. He is her emotional support even now and a part of her precious memories … … These two people with different backgrounds fall in love. Why did Yuri appear before Kasumi? Could he be the boy from that time?

Characters
Harada Tomoyo as Sakurai Kasumi
A single mother who works at ‘Branshes’, a laundry delivery shop for the wealthy as she raises a son who is of high school age. She cherishes some childhood memory and works hard to make a living. Then one day, she meets an enigmatic customer, Ozawa Yuri, and eventually comes to think of him as the man of her destiny.

Saito Takumi as Ozawa Yuri
A popular, up-and-coming designer who is regarded as the top young designer in the industry. He runs a design firm with many staff. Although the media tends to emphasise his good looks, he is serious about his work. He displays an interest in Sakurai Kasumi for some reason and does unexpected things. He is involved with the married Shirai Maho.

Yamaguchi Sayaka as Shirai Maho
The wife of the president of a large furniture manufacturer which commissions many of Ozawa Yuri’s designs. She makes the most of high living and continues with her no strings attached relationship with Yuri. She is also a customer of Sakurai Kasumi’s laundry delivery shop.

Ohgo Suzuka as Ayase Lily
A staff who works for Ozawa Yuri’s design firm. Although she speaks bluntly, she has a kind heart. She worries about Yuri and is meddlesome.

Koichi Mantaro as Fujii Yoji
Sakurai Kasumi’s ex-husband. He abandoned her and his son, Tsugumi, to marry a younger woman. He was a photographer but is unemployed now. He comes to pester Kasumi for money.

Shibuya Kento as Aoi Kaichi
A staff who works for Ozawa Yuri’s design firm. He respects Yuri and is his right-hand man. A part of him is rather timid.

Nishiyama Jun as Sakurai Tsugumi
Sakurai Kasumi’s only child. A third-year high school student. He runs for the track and field club and works on the high jump. But also supports his mother by working part-time at a convenience store.

Kusabue Mitsuko as Fujii Akari
Fujii Yoji’s mother. She sustains the photo studio, which is the family business, by herself. She is Sakurai Kasumi’s confidant even after Kasumi and her son divorced.

Okuda Eiji as Fukami Yoshitaka
A master of the design world and Ozawa Yuri’s teacher. He usually lives in Noto. He has an intense character and constantly manipulates the people around him. His attitude towards his disciple is a mix of love and hate for some reason.

This blog contains information and musings on current and upcoming Japanese dramas but is not intended to be comprehensive.
View all posts by jadefrost →
This entry was posted in Fall 2016 Dramas, NHK and tagged Harada Tomoyo, Okuda Eiji, Unmei ni Nita Koi. Bookmark the permalink.