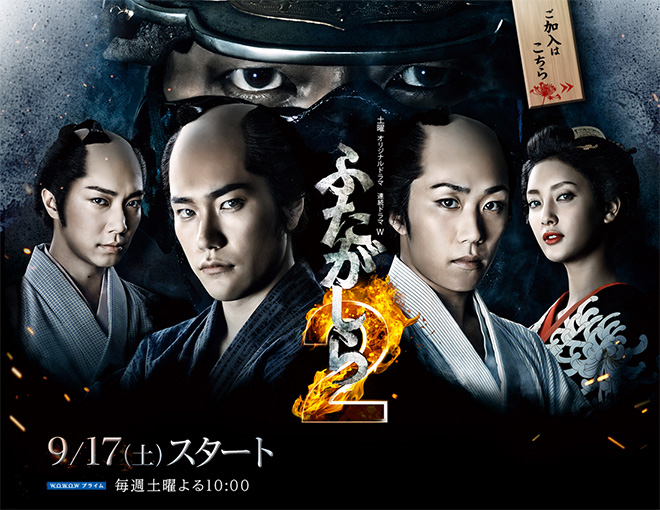 Story
The cheerful, big-hearted Benzo and cool, sharp Soji are two thieves with the motto “steal all dirty money without threats or murder” and carry out their “work” with brilliance. In the day, Soji does food catering while Benzo spends all his time gambling at a den in the post town of Shinagawa. It has been half a year since they established a gang of thieves called Ichishi and set their sights on reaching the top of Edo. One day, Benzo meets Kurazo who is on a winning streak at the gambling den, He saves Kurazao and they hit it off. The two of them immediately head down to Yoshiwara where they encounter Soji who has come in pursuit of young girls caught by men. A procession of courtesans begins in front of the trio. Benzo and Soji are surprised when they see the courtesan. She is Okon. Okon asks them to steal 11 prostitutes. Jinzaburo is behind this. Meanwhile, there is a new head to crack down on serious crimes in Edo and he quickly makes a name for himself by arresting gangs of thieves. The “work” of the Ichishi begins in the middle of this, but … …

Characters
Matsuyama Kenichi as Benzo
One of the heads of the Ichishi gang. He runs his band of thieves with cheerful magnanimity. He goes to the gambling den with money made from thefts and meets Kurazo.

Saotome Taichi as Soji
He established the Ichishi gang together with Benzo. He is levelheaded and has a sharp mind. His cool, lady-killer personality is the exact opposite of Benzo’s. He usually works in the catering business.

Narimiya Hiroki as Jinzaburo
The current chief of the New Akame. He has been very hostile to Benzo and Soji ever since his gang was crushed by the two of them. His cover identity is a hairdresser. He conspires with Kurazo and plots some scheme.

Nanao as Okon
The madam of the New Akame and a courtesan. She is the wife of the late Tatsugoro, the first chief of the Akame which Benzo and Soji previously belonged to. A free spirited and formidable woman. She hides her trysts with Jinzaburo whom she has been involved with and makes a request to Benzo.

Taguchi Hiromasa as Kanoya Kihei
He uses his position as a book lender to support the activities of Benzo and Soji.

Ashina Sei as Ogin
The former leader of a gang of pickpockets. She is indebted to Benzo and Soji who saved her and joins the Ichishi.

Kitamura Yukiya as Masakichi
A thief. He disappeared five years ago but reappears with some objective.

Omori Nao as Kurazo
A merchant. He is saved by Benzo at the gambling den and they develop a close friendship, but he is plotting something behind the scenes with Jinzaburo.

This blog contains information and musings on current and upcoming Japanese dramas but is not intended to be comprehensive.
View all posts by jadefrost →
This entry was posted in Fall 2016 Dramas, WOWOW and tagged Ashina Sei, Futagashira Series, Matsuyama Kenichi, Narimiya Hiroki, Omori Nao. Bookmark the permalink.