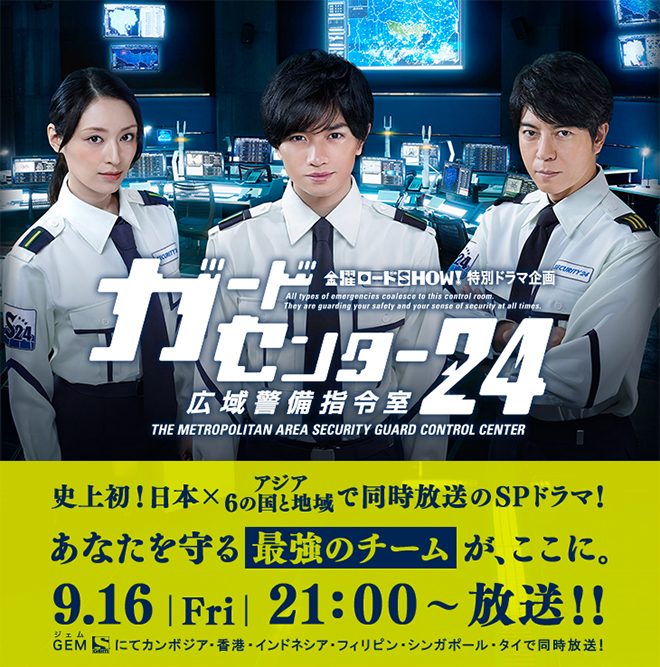 Date: From 9.00 p.m., 16 September 2016
Scriptwriter: Hiruta Naomi (Wild Heroes)
Cast: Nakajima Kento, Kuriyama Chiaki, Tanaka Kei, Kobayashi Kendo, Horiuchi Keiko, Nakamura Baijaku, Kamikawa Takaya, Takahata Atsuko (guest star), Iwahashi Genki, Kawaei Rina, Izumi Soji, Tani Kanon, Maeda Goki
Synopsis: The Security Guard Centre is the central command and control centre for the security firm, Security 24. This is where the ultimate professional group of “observers” make use of the security system that runs throughout Tokyo to issue swift and precise instructions to locations and keep people safe and secure round-the-clock. An intrusion is reported and security officer, Shinomiya Mamoru (Nakajima Kento), heads to the scene under the instructions of an observer. He has a strong sense of justice and has an honest personality. However, he is a little of a problem child with the tendency to ignore the instructions of the guard centre. A brief moment after the centre’s young ace, Anzai Kokoro (Kuriyama Chiaki), starts issuing instructions, Mamoru discovers the intruder. He takes off after the person and apprehends him after a scuffle. He laughingly declares that he has caught the culprit and assures Kokoro, who had ordered him to evacuate, that he is fine. However, she is shocked. Mamoru is assigned to the Security Guard Centre for some reason in an unprecedented promotion and is greeted by the members of the centre – Nonomura Shogo (Kamikawa Takaya), the head of the centre; the smart science guy Ouji Shunichi (Tanaka Kei); the sporty Sotokoba Hidemichi (Kobayashi Kendo) who used to work in the field; customer service professional Minato Mamiko (Horiuchi Keiko) who has even learned psychology; the polite, cautious Kokoro; and the veteran Shinkawa Jinichiro (Nakamura Baijaku) who is a walking encyclopedia on the security industry. As the rookie, Mamoru has to confront all sorts of cases in this central command and control centre. He strives to dispel the fears of the people who call in for help and assure them that there is nothing wrong. There are those who are helped by his words, but on the other hand, he frequently tends to be late in ensuring their security. Then at one time, a big incident develops as a result of Mamoru’s misjudgment. He is stricken and feels deeply discouraged, but … …
Official Website: www.ntv.co.jp/gc24

This blog contains information and musings on current and upcoming Japanese dramas but is not intended to be comprehensive.
View all posts by jadefrost →
This entry was posted in NTV, Summer 2016 Drama Specials and tagged Guard Centre 24, Kamikawa Takaya, Kuriyama Chiaki, Takahata Atsuko, Tanaka Kei. Bookmark the permalink.