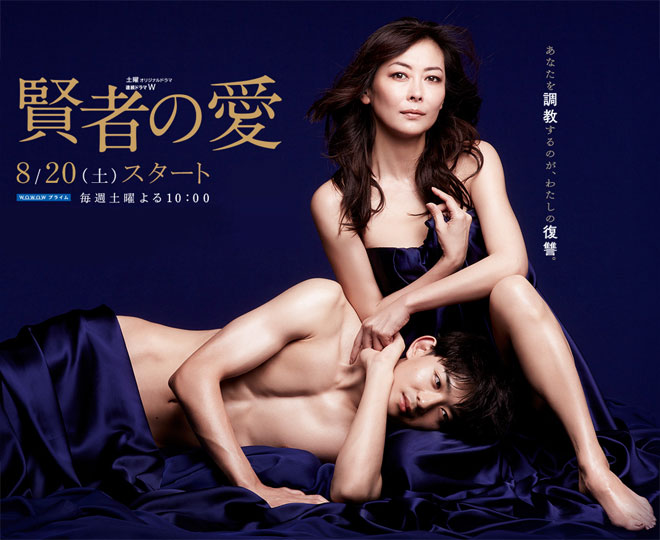 Story
In the room of a luxury hotel, Takanaka Mayuko, dries off the body of a handsome young man. Mayuko is an editor of a literary magazine. The young man she has been having secret rendezvous with is Sawamura Naomi, the son of her good friend Asakura Yuri and her first love Sawamura Ryoichi. Naomi is dependent on Mayuko and keeps seeking her. This is precisely Mayuko’s “revenge” of two decades … … Some 30 years ago, 13-year-old Mayuko lived happily with her father Shogo and mother Miya. Sawamura Ryoichi, a teenage boy whom she liked, stayed in a detached house on the grounds of their family estate in an exclusive residential area by the sea. Then 13-year-old Asakura Yuri moved in next door and they became fast friends. But that was when Mayuko’s life started to derail. Little did she realise that Yuri wanted everything that was dear to her and her first love would be stolen by Yuri. One winter soon after they had become working adults, Yuri suddenly confessed that she was carrying Ryoichi’s child and the couple got married. Mayuko was there to witness Yuri’s childbirth and give a name to the boy at Yuri’s insistence. She called him Naomi. No one had any way of knowing her feelings and hidden agenda … …

Characters
Nakayama Miho as Takanaka Mayuko
A hotshot editor of a literary magazine. She grew up in a privileged family. Her first love, Sawamura Ryoichi, was stolen by her good friend Asakura Yuri and she trains their son to her preference for revenge. Although she is admired by the people around her, something does not satisfy her.

Takaoka Saki as Sawamura Yuri
A full-time housewife. Sawamura Naomi’s mother. She grew up in a cold family and yearned for a family like Takanaka Mayuko’s since she was a girl. She has a naive character and covets everything that belongs to her good friend, Mayuko.

Ryusei Ryo as Sawamura Naomi
The son of Sawamura Yuri and Ryoichi. A university student. He has been trained for 20 years by Takanaka Mayuko. He has a cool personality and has a lack of interest in his own generation. However, he has special feelings for Mayuko and shows a different side.

Tanabe Seiichi as Sawamura Ryoichi
A popular novellist whose pen name is Sawa Ryoichi. Before he became popular, his talent was discovered by Takanaka Mayuko’s father, Shogo, and he lived with the Takanaka family. He knew about Mayuko’s feelings but married Asakura Yuri.

Asari Yosuke as Ishida
A young editor of a literary magazine. Takanaka Mayuko’s immediate subordinate. He aspires to grow into an editor who is responsible for famous writers.

Enoki Takaaki as Takanaka Shogo
Takanaka Mayuko’s father. An editor. A good man who loves his daughter and family dearly. Because he was an editor, the many books that he owned had an influence on Mayuko.

This blog contains information and musings on current and upcoming Japanese dramas but is not intended to be comprehensive.
View all posts by jadefrost →
This entry was posted in Summer 2016 Dramas, WOWOW and tagged Kenja no Ai, Nakayama Miho, Ryusei Ryo, Takaoka Saki, Tanabe Seiichi. Bookmark the permalink.