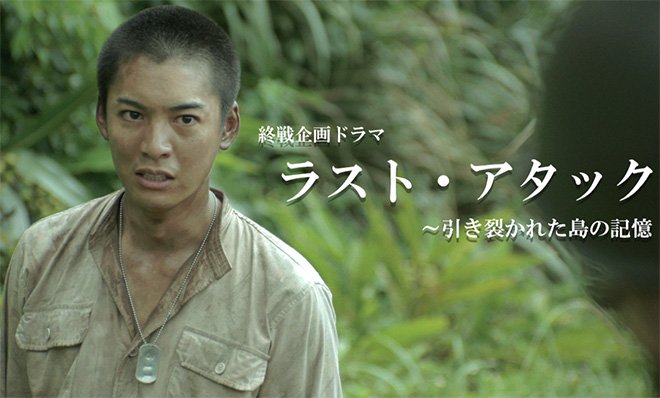 Date: From 9.00 p.m., 15 August 2016
Scriptwriter: Ueno Junya
Cast: Ohno Takuro, Fujimoto Izumi, Alessandro D’Amato, Sergey Kuvaev, Takenaka Naoto
Synopsis: On 3 June 1945, American forces land on Iheyajima, the northernmost outlying island at the height of the Battle of Okinawa and all the islanders surrender. It becomes the “miracle island” after the sudden arrival of peace. There is actually a Japanese officer on this island. He is 22-year-old navy second lieutenant, Ii Toshio (Ohno Takuro). Several weeks earlier, he was shot down by the Americans and rescued by the islanders just as he was drifting. Listening to the pleas of the the islanders, Toshio conceals his identity. His interactions with the islanders, who have lived resolutely despite the ravages of war, touch him. Toshio also starts to forge unlikely friendships with two American officers, James (Alessandro D’Amato) and Andrew (Sergey Kuvaev). However, just as the three of them are trying to live as individuals and not as friend or foe, everything comes to naught because of a last attack after the radio broadcast announcing acceptance of the Potsdam Declaration and the end of the war … …
Official Website: www4.nhk.or.jp/P4066

This blog contains information and musings on current and upcoming Japanese dramas but is not intended to be comprehensive.
View all posts by jadefrost →
This entry was posted in NHK, Summer 2016 Drama Specials and tagged Last Attack ~ Hikisakareta Shima no Kioku, Ohno Takuro, Takenaka Naoto. Bookmark the permalink.